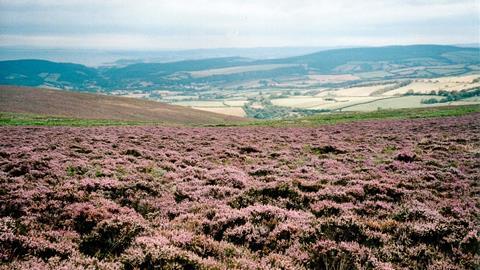 The Knights of Exmoor

The fertiliser revolution that turned moors into farmland

Daniel Defoe, writing in the 1720s, had some very snippy things to say about Exmoor. ‘Cambden calls it a filthy, barren ground, and, indeed, so it is … It gives, indeed, but a melancholy view, being a vast tract of barren, and desolate lands.’ Desolate, almost uninhabited – but far from unused. Until the early 1800s, farmers from the surrounding lowlands used the moor for summer grazing, and from medieval times up to 1819 it held the status of a royal forest, owned ultimately by the Crown.

Enter John Knight, an ironmaster from a well-to-do family in Worcestershire. A businessman with a broad range of commercial interests, Knight exemplified the generation of agricultural improvers whose activities brought in new methods of scientific farming in the early 19th century. Knight had the funds, the interest and the vision to take on a grand adventure – nothing less that the reclamation of the Forest of Exmoor for agriculture. Having purchased the land, more than 10,000 acres, from the Crown for the princely sum of £50,000 (around £3.9 million today) he set about transforming the landscape and developing a vast agricultural enterprise along thoroughly modern lines.

Knight spent hugely on infrastructure, building roads, stone-built farmhouses and barns, and splitting the rank moorland into workable units with impressive stone-faced earth banks. Then came the science. The thick peaty turf was pared from the soil using teams of horses or oxen, the turf being stacked to dry out and then burnt to ash. Deep ploughing of the unyielding clay soil followed, in later years using mobile steam engines to drive the heavy plough, breaking up the iron-pan which impeded drainage. After being left over the winter so that the frost could break the tilth down further, the turf ash was spread and lime, imported from the coastal lime kilns at huge expense, was applied at a rate of up to three tonnes an acre to help neutralise the bitter, acidic soil.

Robert Smith, Knight’s first land agent, kept meticulous records of his experiments into the efficacy of the ‘artificials’, as he called mineral fertilisers. He set up acre-sized experimental plots to measure the impact of no treatment, ‘native ash’ alone, and ash plus five increasing rates of lime on a crop of turnips. It was an early example of truly scientific agriculture.

The first few harvests after this mighty mobilisation of nutrients gave bumper crops – but the story did not remain bright for some of the tenant farmers Knight had attracted. Farming at altitudes between 300 and 450 metres was risky, especially for those ambitiously attempting to grow weather-sensitive crops like grain. Corn harvests often failed, the heavy rain on the moor – over 2000mm a year on the highest ground – stripped out nutrients almost as quickly as they could be applied and the cost of repeated liming was ruinous. The bill for preparing each acre of land for cropping was over £4 in 1850, of which more than half was spent on liming.

Eventually, after a number of tenants were driven out by debt and frustration, Knight’s son Frederick – who had grown up on the moor – moved the estate into a more sustainable farming model. As a visitor in 1880 noted: ‘The late proprietor was convinced that the four-course system … might be made to succeed even on Exmoor…’ but ‘the soil, climate and elevation … renders the greater part of the estate unsuitable for the growth of grain.’

The answer, both then and now, was the seeding and management of pasture for both cattle and sheep. Shepherds from Scotland and the Scottish borders were employed, along with their hardy breeds of sheep, to build the new economy.

When I applied for a research post to investigate the soil chemistry of Exmoor in the 1970s, Defoe’s curt analysis was pretty much all I knew about the place, and while I learned a lot more over the next few years it often came back to me. The fieldwork I undertook high on Exmoor was often cold, wet and bleak; but the stark beauty of the landscape and the thousands of beech trees planted by the Knights left a deep impression – despite the undeniable correlation between the dates of my visits and particularly heavy rainfall. Towards the end of my contract, a chance conversation with a local farmer revealed that he and his neighbours had also noticed this – and awarded me the ominously Gothic nickname of ‘the Weatherman’, thereby cementing my place in local folklore.