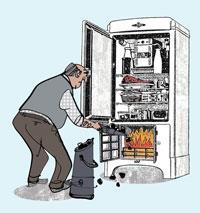 ’Absurd’, ’roundabout’, ’clumsy’ - these words well describe the way we turn heat into electric power. Given a source of heat - a furnace, say, or a nuclear reactor - we use it to boil water. We make the steam expand in a turbine to spin the blades. We condense the expanded steam back to water, return it to the boiler and couple the spinning turbine to an alternator to generate electricity. We send that electricity into a grid. At some great distance, we subdivide the electrical grid energy, and use each part of it to drive small appliances and lights.

In the domestic refrigerator, we exploit the same technology in reverse. An electric motor drives a pump which pushes a refrigerant liquid into a chamber where it evaporates, absorbing latent heat. That pump also compresses and reliquifies the refrigerant vapour, pushing its latent heat out into the kitchen. The liquid goes round again. The whole device only takes a few watts of power, but depends on that same clumsy fluid-to-vapour-and-back technology.

And yet heat and electricity ought to match simply and directly. No liquids, piping, pumps or moving parts should be needed. The thermoelectric effect has been known for well over a century, and is much used in bolometers, infrared detectors, and so on. It works well with microwatts of energy, but is sadly hard to scale up. Thermocouples of pure metal give tiny voltages (though they have powered some space probes).

Technologists once hoped that semiconductors would transform the field of thermocouples; so far they have failed to do so. Bismuth telluride thermoelectric elements are put to work in a few specialised portable refrigerators, but are never used in anything like a grid power station.

Yet I still have hope. The demand-pull and technology-push are strong social forces. Our biggest current demand-pull is probably the so-called ’green revolution’. We are all looking for a neat cheap way of getting energy. Wind turbines are being boosted by government subsidies; so is solar power - despite the fact that a clear Sun is very rare, and in any case goes down just when we want its light. Solar power schemes tend to store and use energy as heat - more antiquated boiling water technology!

Meanwhile, we ignore the many sources of gentler warmth which would be ideal for thermoelectric exploitation. My favourite is geothermal heat, which you can get just by drilling a hole in the ground. The heat of the deep Earth is free, safe, and universally available; in a few places it even gets close enough to the surface to attract engineers. I love the idea of getting free energy from a hole in the ground!

Now think about technology-push. The semiconductor itself dates back to the 19th century. Yet the transistor was not invented till 1947; and it took decades for the computer revolution to transform the way we all handle information. Similarly, superconductivity near absolute zero was discovered in 1911; and for decades physicists were pleased whenever they devised a new material that raised its temperature by a degree or so.

In 1987 cuprate-yttrium superconductors transformed the field. Thermoelectric technology is ripe for a similar revolution. I suppose we want a material that conducts electricity well but heat badly; the skutterudites CoAs3 and IrSb3 look promising. My own guess is that some expanded metallic aerogel may show the way forward. Anyway, I am waiting for an unexpected new development in solid-state thermoelectrics to outmode completely our present clumsy ways of doing things.