Dr Jekyll and Mr Hyde star in the famous story by Robert Louis Stevenson. Jekyll can turn himself into the evil Hyde by drinking a crucial draught made from some un-named salt. When the supply runs low, Jekyll orders it anew from chemical stockists - and finds that it does not work! The old stuff had some unknown impurity which powered it. Dr Jekyll was distraught. In his plight, I would have transferred my enquiries to ancient or out-of-the-way chemical laboratories. Companies whose product never changed might have long-neglected analytical laboratories, universities placing more emphasis on the arts might have kept shabby, threadbare chemical laboratories for those determined students who stuck to science. Dr Jekyll’s letter, offering to pay handsomely for a dusty old bottle on a shelf, could well have cheered some downcast laboratory supervisor. Hyde’s wickednesses, and Jekyll’s crafty subterfuges, could then have lasted longer. 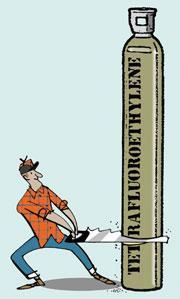 This famous piece of fiction borrows from chemical fact, and I have often wondered where Stevenson got the idea. He was not a chemist at all, and yet unsuspected (and often unidentified) chemical impurities have often transformed or extended chemistry or chemical technology. The most dramatic example I know is that of Roy Plunkett in 1937, who found that a gas-cylinder of tetrafluoroethylene had lost all pressure, but still had full weight. With amazing courage, he sawed it open and found that the gas had polymerised to a solid. It turned out that a trace of impurity, perhaps oxygen, in combination with the iron from the inside of the cylinder, had catalysed the polymerisation. Other chemists found that the new polymer, PTFE, was resistant to attack by the highly reactive gas uranium hexafluoride, UF6. They therefore turned it into the diffusion membranes by which UF6 made from natural uranium could be isotopically enriched to 235UF6 for the atom bomb. These days PTFE is a commercial plastic, made from the monomer by rather more well-defined polymerisation catalysts and used, among other things, to make the non-stick coatings on cookware.

Another example stemmed from worried Australian farmers, on whose grassy fields sheep tended to ’pine’, losing their appetites and slowing growth and wool production. A soil expert reckoned that iron salts were needed. They were duly added to the fields, after which the sheep did well, until one day the iron salts failed to work. Biochemical investigations showed that it was not the iron that mattered, but an impurity in the iron - cobalt! Each sheep needed about a microgram of cobalt a day, so as to make vitamin B12, cyanocobalamin, which biochemists had not known about before.

Yet again, the contraceptive pill was developed from trials in 1956 on women in Puerto Rico, who were given pills made essentially of progesterone. The trial used fairly crude material that had a bit of oestrogen as an impurity. The pills seemed to work, and the company developed them for a wider market. They used a purer source of progesterone, from which the oestrogen impurity had been removed, and the pills began to fail! The company had to put the oestrogen back. With its reliability restored, the contraceptive pill could go on to further the sexual revolution. Like that impurity of Stevenson’s, it even found its way into fiction: in his novel ’Couples’, John Updike applauds the way it lubricated the infidelity of American married women. One of the characters even praises the pill to her lover. ’Of course it works! It’s wonderful. Welcome,’ Georgene said, ’to the post-pill paradise.’ Sadly, nature has since fought back.