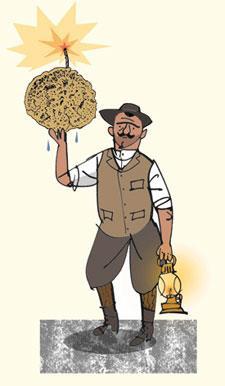 I once conducted a dramatic experiment for a BBC TV programme on chemistry. I burned sodium in chlorine, and ate the resulting salt. The clip is still in the BBC archives - nobody dare repeat the experiment. It surprised me that the sodium did not ignite spontaneously in the chlorine. I had to put the sodium in a deflagrating spoon, hold it in a Bunsen burner to light the sodium, then transfer the spoon with its flaming sodium to a flask of chlorine gas. For some reason, sodium at room temperature does not realise that it can react with chlorine. Only at a high temperature does it sense that it can combine so advantageously.

The conventional argument is that a hot reaction goes faster because more molecules (a larger Arrhenius proportion) can reach the energetically excited reaction state. Yet I like to think that the molecules have some personal view of which reaction state to choose. They like potential ignitions and explosions.

Consider that dangerous explosive, nitrogen trichloride. A single molecule would have to explode as NCl3

N + Cl2 + Cl. You would need lots of energy to create two single atoms, and the reaction would not be very attractive. But suppose two molecules came close enough. They could react together as 2NCl3

N2 + 3Cl2. With no single atoms, this reaction would be strongly exothermic: a good explosion.

So consider a dilute solution of nitrogen trichloride at some elevated temperature. Single molecules in solution would still be stable. Only when two molecules collided, or got close enough together, could they enjoy a mutual explosion.

Accordingly, a dilute hot solution of nitrogen trichloride should emit monochromatic radiation at a definite rate. The frequency of that radiation would correspond to the energy released by a two-molecule explosion; its intensity would depend on the collision rate of the trichloride molecules.Nitrogen trichloride molecules only think about exploding when they get hot. They then ’want to react’, as did my sodium. At a low temperature they ’do not want to react’. So I muse that enough cold quenches the molecular imagination.

The Simplon Tunnel was blasted through the Alps by a highly cunning explosive - each charge was simply a stick of charcoal dipped in liquid oxygen. Like a sponge, the charcoal soaked up the oxygen. If the detonator failed to set the stick off, you waited a few hours for the liquid oxygen to evaporate. The charcoal stayed behind; it was harmless and you could remove it.

The detonator was invented by that genius Nobel. It is usually metallic - mercuric fulminate [Hg(ONC)2], or lead azide [PbN6]. It can be fired electrically or mechanically and makes a small, sharp explosion which sets off the main charge. Perhaps at some suitably low temperature - probably a lot lower than that of liquid oxygen - even detonators ’do not want to react’ and become stable solid objects. I reckon that every potentially explosive molecule needs to see the advantage of exploding, and needs to be a bit warm.

My ultimate dream is N6. This hexagonal molecule would be stabilised by resonance, like benzene or pyridine; but it does not exist. In some way N6 must be aware of the great energetic advantage of exploding to 3N2. Maybe at a low enough temperature, it would not feel that way, and you could make it.