As the various committees begin to sort through this year’s Nobel prize nominations, here’s a simple question for all you scientists out there: at night, when you snap off the light and snuggle your head into the pillow, which one of your many fantasies most often dances in your head as you edge towards sleep? Now be honest! 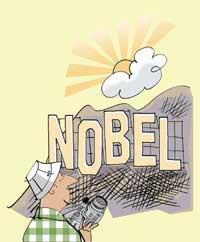 Yes. You imagine yourself in October, getting that divine telephone call from Stockholm with the news that you have won the Nobel prize in Chemistry. And, lo and behold, you are no longer just Prof. Smith toiling anonymously in the lab. With one phone call, you have been anointed, you are now the famous Nobel prize winner Prof. Smith. All those lesser colleagues who failed to recognise you the day before can see it plainly now. Genius is written all over your grinning, glowing face - and that Nobel glow will hover around you for the rest of your life.

A perfectly justifiable fantasy - and not just for scientists. Who wouldn’t be thrilled to win a Nobel prize worth over one million dollars? You would have cameras shoved in your face, reporters hanging on your every word and you would don a tuxedo or evening gown in December for a lavish banquet with royalty at the Nobel Awards Ceremony.

But does the mystique and near hysteria each October, which rivals Hollywood’s Academy Awards, make scientific sense? No. Do only great scientists win Nobel prizes? No. Are all scientists who never win a Nobel prize inferior to Nobel laureates? No.

As a scientist trained to think logically, it is worth considering that the Nobel prize is the world’s most prestigious science award, but the selection process is quite provincial. Although nominations pour into Stockholm from around the world, the vetting process is a Swedish affair, with the Royal Swedish Academy of Sciences selecting winners in chemistry and physics, and the Karolinska Institute in medicine.

There can be no doubt that most of those who ultimately decide who gains admittance to the world’s most exclusive scientific club are quality scientists capable of recognizing significant achievement. But as Nobel prize expert Robert Marc Friedman notes, the selectors are human.

Indeed, in 2006, after Germany failed to score a Nobel win, two top chemists, including Nobel winner Robert Huber, lamented a lack of lobbying effort by the German scientific establishment. And guess what? Germans won the next year in chemistry and physics. Mostly likely, of course, pure coincidence. But you don’t have to be a Nobel winner to figure out that if top scientists feel that increased lobbying is necessary to win prizes, then the selection process might not always result in top scientists winning.

Friedman is troubled by the ’myth and ritual’ of Nobel prizes, the almost show-business aspect of the announcement of winners, and their instant ascent into a higher universe inaccessible to non-Nobel winners. Noting how often utterances of winners are quoted in the press or by politicians, Friedman says the Nobel prize ’creates an artificial hierarchy of significance.’ A surf on nobelprize.org confirms that some savvy marketing is involved in the whole Nobel prize process.

Most scientists realise the shortcomings of the Nobels, and the inflated stature that winners automatically assume. Nonetheless, they all want to win one and every October they sit or lie by the telephone hoping for the call. ’How do you stop the Nobel glacier?’ he asks. ’It just keeps moving along.’

Maybe the solution is to put the Nobel prize in perspective. Just as the best films, directors and actors do not always win Oscars, sometimes Nobel winners are not the most deserving scientists. We can have fun watching both ceremonies, but maybe we should be careful not to take them too seriously.
Ned Stafford