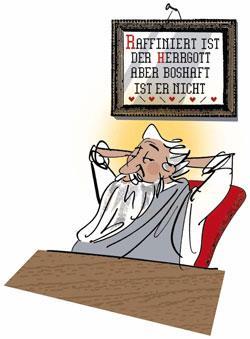 ’Raffiniert ist der Herrgott, aber boshaft ist er nicht.’ This note in the professors’ lounge at the mathematics department of Princeton University’s Institute for Advanced Study is one of Einstein’s most famous sayings. A fair translation might be: ’God is subtle, but He is not malicious.’ It is a clear and insightful comment on the laws of science.

It certainly matches my approach as a chemist. I was once making aluminium chloride complexes and discovered that acetonitrile gave me splendid crystals of AlCl3.2MeCN. The obvious molecular structure had one aluminium atom attached to two acetonitrile molecules. Much later I realised that I had been completely wrong. The stuff was not covalent at all, but ionic. Acetonitrile and AlCl3 actually came together as AlCl3.1.5MeCN. The other 0.5MeCN was present merely as ’acetonitrile of crystallisation’. I should have suspected this at the time. The solid crystals were quite stable under vacuum in the cold. But when I heated them, the crystals evolved acetonitrile vapour, and left AlCl3.1.5MeCN.

It took me years to realise that this was not a dramatic heat driven chemical reaction, but just the loss of acetonitrile of crystallisation from a molecular structure I had got completely wrong. I had to admit that my new structure, though quite different from my initial one, was totally fair to the basic chemistry. The simple 1:2 ratio which so misled me, and which indeed had misled the chemists who had made the stuff before me, showed God as a subtle chemist but not a malicious one.

And this was Einstein’s crucial point. The universe is not a put up job. God did not make scientific laws the way they are to confound humanity. They are just what they are. We may get them wrong, or make incorrect assumptions about them, but the laws themselves are above all that. They may be subtle, but they are quite fair and not malicious.

Philosophers once held views that were the complete opposite of this. They saw an ingenious theological connection between the ’macrocosmic’ world of the universe, and the ’microcosmic’ world of the human body. The ’doctrine of signatures’ held, for example, that a plant with a leaf shaped like a lung should be good for diseases of the lung.

Einstein would have denied any such connection. A leaf has a shape defined by biological laws. We don’t know those laws, but they depend on plant biology and not on any message for human beings. Again, Newton wanted there to be seven colours in the rainbow - seven being a special number in both cosmologies (the seven metals, the seven planets, the seven deadly sins, and so on). So he divided the blue part of the spectrum into three - blue, indigo and violet. Modern observers reckon that blue and violet may be real and distinguishable colours, but indigo is an unconvincing subjective mixture. To us, there are only six colours in the rainbow.

And how did Einstein come by his dictum? My guess is that he was thinking of his famous prediction that light should be bent by the sun. A star is a very powerful source of light; the sun is heavy enough to bend that light. So a star should seem to shift in position as the sun nears it. But the sun is far too bright for you to see a star close to it! Is God being malicious and hiding something? Not at all. You just have to wait for a total eclipse. Then you can see stars near the sun. A good eclipse occurred in May 1919, and two British expeditions went out to study the matter. They found the effect that Einstein had predicted. As he had calculated, it was very small, but there it was. Raffiniert ist der Herrgott, aber boshaft ist er nicht!