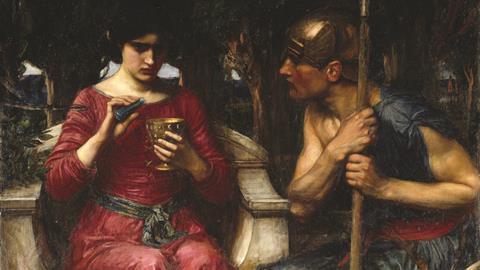 Clothing that is literally to die for

The poisoned dress holds a special place in the folklore and mythology of a variety of cultures.1-3 Fear of betrayal, of being duped, of a gift bringing not joy but sorrow and death, the poisoned dress embodies our fears with its tales and legends of poisoning our bodies. The Greek dramatist Euripides, with his play Medea, told a gift-to-beware-of tale as early as 431BC, with a wrathful poisoner as the title character. Medea, jilted by her husband Jason (of the Argonauts) in favour of the King of Corinth’s daughter Glauce, soon decides to take revenge on king, husband, and princess:* ‘Best the straight route in which I am most skilled – to take them off with poisons.’

What follows is a terrifyingly vivid example of a poisoned dress, paired with a tainted crown that brings to mind another poison-loving author. ‘Uneasy lies the head that wears a crown,’ uttered Shakespeare’s titular character in Henry IV part II; Medea’s first target, princess Glauce, certainly had an uneasy death. 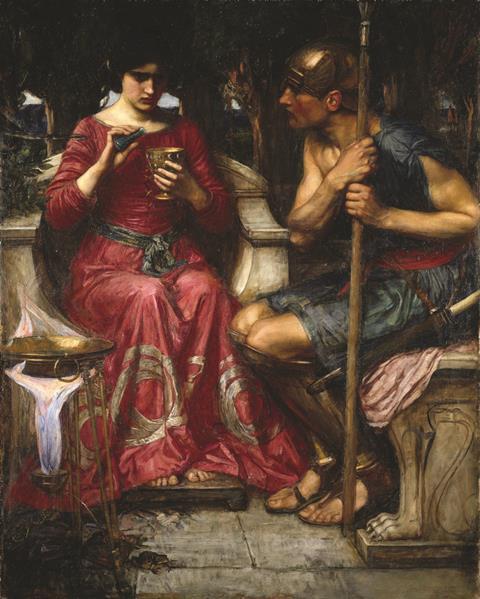 Medea: ’Just look away for a moment, Jason… ignore the snake… and this vial… now, cup of tea?’

…she scooped up the fine robe and put it on; then she fitted the golden crown around her curls
⁞
Suddenly there was a terrible sight to see:  the color drains from her face; her step unsteady, she tries  to go back, trembling from head to foot, and barely manages to stumble into her seat and avoid falling on the ground.
⁞
…white foam streaming from her mouth and from her eyes the pupils turned back; and the blood was drained from her skin.
⁞
But a twofold trouble was warring against her: the crown of gold around her head was spewing out an eerie stream of ravenous fire,
⁞

She stands up and tries to escape, but she is on fire. She shakes her head this way and that, trying to throw off the crown, but all the more tightly the gold holds its bonds; and the fire — when she shook her head — burned twice as bright. Overcome by the disaster she falls to the floor, unrecognizable to the sight of anyone but a parent. The condition of her eyes and her once lovely face were murky, and blood dripped from the top of her head with fire mixed in, and the flesh was dripping from her bones like sap from a pine, through the hidden gnawing of the poisons, a terrible sight.4

Medea’s poison is more like a incendiary weapon than the classic poisons of literature, such as hemlock, strychnine and arsenic. For modern readers, it will bring to mind another author’s fictional weapon – George R R Martin’s wildfire in the Song of ice and fire series (and the TV show Game of thrones). This, in turn, is regularly likened to Greek fire, a weapon used by the Byzantine empire from at least the 7th century. Martin’s wildfire and the Byzantine’s Greek fire are often compared with napalm, as has Medea’s concoction. Essentially gasoline modified with additives to be stickier and more viscous but hotter burn, napalm is a fearsome weapon that echoes and surpasses the others – attacks are all too recent and real.

Unlike the makers of napalm, the Byzantines (and Euripides) didn’t have gasoline. Instead, they had naphtha, a liquid hydrocarbon mixture. Like the makers of napalm, Greek users added their own additives to give their formulation desired properties. Napalm (and likely its earlier Greek version) coats and penetrates all types of materials, including fabric. When ignited, napalm burns through clothes and flesh, maiming and killing in an excruciating fashion. Euripides’ description of Princess Glauce’s death, even with its artistic licence, seems to capture napalm’s fury along with Medea’s. And while the play’s legacy is often thought to be literary and sociological, the tragedy also had quite an influence on naphtha’s history – it was once commonly referred to as ‘Medea’s oil’.

But there’s more. Medea employed two weapons in her murderous scheme, after all. And her poisoned dress is perhaps made more terrifying by its similarity to one of the most fearsome weapons of the 20th century.

Biological warfare brings us to another poisoned dress tale and real-life connection. In Greek mythology, the centaur Nessus is killed by Hercules using an arrow dipped in venom from the monstrous hydra. While dying, Nessus convinces Hercules’ wife Deianira to collect his blood for a love potion, just in case Hercules ever gets a wandering eye. Deianira eventually gifts Hercules with a tunic she’s treated with Nessus blood – unaware the centaur’s blood is tainted with the hydra’s toxins.

What happens next is visualised by the Greek dramatist Sophocles, a contemporary of Euripides, in his play The Trachinae:

At first, hapless one, he prayed with serene soul, rejoicing in his comely garb. But when the blood-fed flame began to blaze from the holy offerings and from the resinous pine, a sweat broke forth upon his flesh, and the tunic clung to his sides, at every joint, close-glued, as if by a craftsman’s hand; there came a biting pain that racked his bones; and then the venom, as of some deadly, cruel viper, began to devour him.5

While mythological, the Shirt of Nessus would adhere to the dictionary definition of biological weapon. In her book Greek fire, poison arrows and scorpion bombs, Adrienne Mayor goes way back to documents warfare reality with their links to legends.6

Fastforwarding from the ancient to the New World, Mayor has connected the shirt of Nessus to colonialist forces impacting the indigenous peoples of the Americas through ‘smallpox blankets’. Unlike the Shirt of Nessus, smallpox blankets are not a myth. During the seven years’ war (1754–1763), the British distributed blankets that had been used by smallpox patients to native Americans, deliberately attempting to start an outbreak. Epidemics resulting from the blankets killed more than 50% of many affected tribes. While a smallpox vaccine lead to the eradication of the disease in the US, this disfiguring and deadly disease was identified by the Johns Hopkins Working Group on Civilian Biodefense as a modern threat in 2010 because of its lethality and lack of treatment for those infected, plus ‘[r]outine vaccination throughout the United States ceased more than 25 years ago’.7 In light of a bioterrorism threat, the US maintains a smallpox vaccine stockpile.

Real fears stoke folklore and legends. Medea’s poisoned dress captures our real fears and often the reality of interpersonal and mass violence in our histories.

Medea’s most shocking victims are not mentioned here intentionally. Neither is the full story of Nessus and Hercules.