More than one way to be 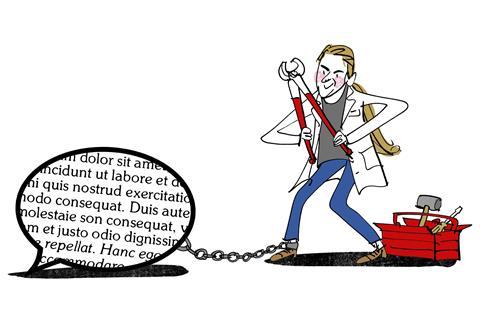 As a community we represent a wide diversity of backgrounds, each with eccentricities in accent, mannerisms and word choice. Despite this, scientists still feel the need to alter their accent, change their word choices or generally hide their unique perspective, a process which is commonly entirely subconscious. They are conforming with academic hegemony, the concept that academics commonly communicate with a single voice that represents the vocabulary, tone and thought processes of the dominant group within academia – traditionally, white middle-class men. The hegemonic voice can sometimes be presented as a technically correct form of speech, but in reality there is no one single ‘correct’ way of speaking. Each perspective brings its own nuances, which, as long as it is clear and understood, adds variety, and for myself, a source of enjoyment in communicating science with a diverse set of learners or peers.

A rigid ideal of what comprises correct communication only causes policing of language, which directly enforces ableist, racist and classist stereotypes relating to intelligence, or how valuable someone’s opinion is. To avoid being dismissed this leaves those outside of the presumed default cultural window with two options. Either learn to communicate with this voice, known as assimilation, or feel like an outsider to their own community.

For myself, a working-class person, I first tried assimilation. I subconsciously altered my accent, avoided terms not common in academia and avoided bringing attention to when I didn’t understand a discussion. All of these were not conscious choices, but instead what felt like common sense to ‘fit in’ to a community that I was intrinsically not a part of. Soon though, the changes in myself were made clear when visiting friends and family. A rift opened between who I felt I was and how I was acting. What was subconscious became conscious and I was unable to keep up the façade, leaving me mentally drained and unable to effectively learn from those around me.

I then turned instead to speak naturally, ask questions often (even silly ones) and ignore the potential results. A choice that improved my teaching relationships significantly, and thanks to being in relatively accepting circles didn’t result in the dismissal of my ideas. However, the feeling of being an outsider in the academic community remains, which when unchecked still leads to a sense of disconnection and imposter syndrome.

Hard evidence for such problems is plentiful. For example, researchers such as Rachael Goodman and Cirecie West-Olatunji have detailed how being forced to take part in the singular pedagogy used in academic settings leads to traumatic stress for minority populations in the US academic system. This stress presents in many forms including imposter syndrome, withdrawal from the community and even depression. Such findings support the idea that the structural barriers faced by minority populations result from a fundamental issue where the education system doesn’t represent or serve those it teaches.

You might well be thinking: ‘That’s bad – but how do we even begin to address it?’ Well, work to do so has been taking place for some time through movements looking to expand the range of voices in academia to include those of different cultural backgrounds, such as the decolonialising academia movement, the Alliance of Working Class Academics and Pride in Stem. Also, any of you who read this article and didn’t stop when it became uncomfortable are taking part in the process of improving academia. Reflecting on our community and deciding what you agree with and what you think should change takes effort but it is important. Perhaps you have decided the voice of academia works for you and is important for the field. If so, that’s fine. We don’t all have to agree but what’s important is that it is a considered choice, and critically that it isn’t a default placed upon others.

So for those who are supervising researchers from any background, but especially minority groups, be it people of colour, working class, LGBTQIA+ or disabled researchers, if you wish to help move us in the right direction, when discussing changes to written work, changes to presentations or just general vocabulary or speech, consider where your criticisms are coming from. If upon self-reflection these criticisms are to improve clarity for everyone, or to portray a technical element, go ahead. But if you find that it is only you it improves clarity for, or it is for personal taste, consider leaving it as it stands, and allowing your students to have a more unique voice. Such a small change takes minor effort, but over time for your students it could mean seeing a future for themselves as a member of the scientific community.