You can’t shake a 1000 gallon reactor, says Chemjobber, so plant-scale hydrogenation is a challenge of phase boundaries

The journey of a hydrogen molecule to meet and break a double bond is a strange one, with many foreign borders to cross. Unlike solution chemistry, where all the reactants are in the same phase, hydrogenation combines three phases of matter: the gaseous hydrogen, the solvent (and soluble starting material) and the solid catalyst. Thinking about getting molecules to where they need to go is a new concept for the novice process chemist, but is familiar to chemical engineers as mass transfer.

Gaseous hydrogen must first dissolve in the reaction solvent. To aid that dissolution, there’s the classic laboratory Parr shaker, where a glass bottle is first carefully clamped down, filled with catalyst, solvent and starting material, ideally with an inert atmosphere like nitrogen or argon. The highly flammable hydrogen is introduced into the bottle through a tube and stopper, usually under significant pressure. Then the rhythmic rudda-rudda-rudda Rube Goldberg agitation of the Parr shaker starts, and the sloshing constantly mixes solvent and gas. The rubber stopper can be the bane of many a young chemist’s existence, as it can leak the precious hydrogen atmosphere and, if one is unfortunate and there is sufficient pressure, the solvent and compound itself. If selected incorrectly, the rubber can contain sulfur compounds that poison the catalyst. 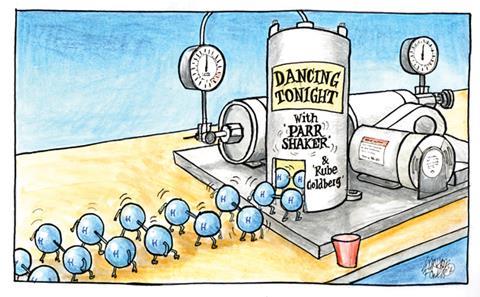 You can’t shake a 1000 gallon steel reactor, nor can you close it with a rubber stopper the size of a rugby ball that poisons your hydrogenation catalyst. But you can attach a mean-looking agitator to get the gas and liquid mixing. While agitation within large-scale chemical reactors is ever-important, it becomes even more so with hydrogenators. The graceful lines of a glass-lined steel retreat-curve agitator (which looks like a crow’s foot) don’t generate enough of a froth of reaction solution and gas, so six-bladed steel agitators that rotate speedily are used in these reactors. The smooth surface inside a reactor can’t create the turbulence that would help with mixing, so hydrogenators typically have internal fins or baffles. Keeping all of this inside the reactor is an extremely heavy manway cover, bolted down with thick steel bolts.

Safety officers tend to frown on filtering slurries of flammable solvents in the open atmosphere, particularly when they contain metals that ignite easily in air

Once the gaseous hydrogen is dissolved in the solvent with the starting material, it must ultimately go from the liquid to the solid phase and adhere to the catalyst surface. There are many different choices for the supported catalyst; the textbook description of ‘5% palladium on carbon, water wet’ omits quite a bit of detail. Activated carbon can be derived from carbonised charcoal, wood or even coconut husks, and has a vast surface area. Preparing hydrogenation catalysts involves depositing tiny crystals of platinum-group metals in its nooks and crannies. It’s there, and only there, that the reaction chemistry happens.

Once the gaseous hydrogen has completed its journey, crossing liquid and solid boundaries, those two phases must also part ways. Separating the catalytic metal and its solid support from the reaction solution typically involves filtering the mixture before it is distilled or crystallised. In the laboratory, this tends to be done through a plug of celite on a Büchner funnel, under a stream of nitrogen and with enough solvent to keep the catalyst wet and avoid fires. Plant safety officers tend to frown on filtering slurries of flammable solvents in the open atmosphere, particularly when they contain metals that ignite easily in air, so the reaction mixture is filtered from one inert reactor to another through a cartridge filter.

Why force this final parting? Colour matters – customers tend to frown on grey products that should be white. An even more compelling reason is that, for most pharmaceutical applications, the products are ultimately ingested by humans as medicine. Regulators set strict limits on the amount of platinum-group metals that patients are exposed to. After filtration and crystallisation, there is always a quality control analysis to check they have been removed from the product.

There’s a practical reason as well: at the end of a plant campaign, all of the hydrogenation catalyst, the filter housings, the gloves and bags will be packed into a drum and shipped back to the catalyst manufacturer, where it will be assayed for precious metal content. While the chemists get some money back, the precious metals are recovered and refined, to be sent back for yet another meeting, someday, with gaseous hydrogen.