The future is lead-free for perovskite solar cells 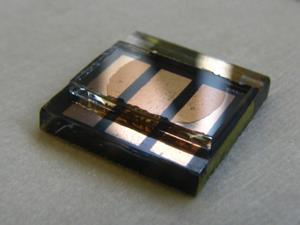 A lead-free and non-toxic alternative to current perovskite solar-cell technology has been reported by researchers in the UK: tin halide perovskite solar cells. They are also cheaper to manufacture than the silicon solar cells currently dominating the market.

Nakita Noel, part of Henry Snaith’s research team at the University of Oxford, describes how perovskite materials have caused a bit of a whirlwind since they came out in 2009: ‘Everybody that’s working in the solar community is looking to beat silicon.’ Despite the high efficiency of conventional crystalline silicon solar cells (around 20%), high production and installation costs decrease their economic feasibility and widespread use.

The challenge to find a cheaper alternative led to the development of perovskite-based solar cells, as organic–inorganic metal trihalide perovskites have both abundant and cheap starting materials. However, the presence of lead in some semiconductors could create toxicology issues in the future. As Noel puts it ‘every conference you present at somebody is bound to put up their hand and ask “What about the lead – isn’t this toxic?”’

‘The drive for us was looking for something to replace the lead that we can still get photovoltaic performance out of,’ she explains. They tested the lead-free perovskite, methylammonium tin triiodide (CH3NH3SnX3) as their photoactive material. Due to the instability of CH3NH3SnX3 when exposed to oxygen and moisture, all material and device processing was conducted in a nitrogen-filled glovebox. Equimolar quantities of SnI2 and CH3NH3I were dissolved in degassed N-dimethylformamide, with the solution then spin-coated onto a substrate. 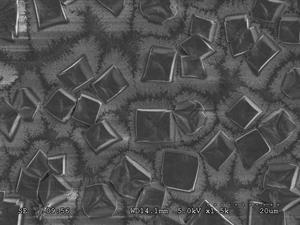 This research demonstrates the first operation of an entirely lead-free perovskite solar cell, achieving 6% efficiency with the prototype. The team believe that if the material was stable the diffusion length, currently ~30nm, could increase closer to that of lead, ~1µm. This would enable more current to be accepted from the device, increasing efficiency.

Brian Hardin, co-founder of PLANT PV, US, and an expert in new materials for photovoltaic cells, says the study ‘should be considered a seminal work on alternative perovskites and is extremely valuable to the field as they look to better understand how changes in chemistry affect solar cell performance and stability.’

The team are now working to stabilise the tin material itself, and have already achieved promising results.