There are two issues to address before perovskite solar cells are practical for mass deployment. ‘One of them is stability, and the other one is actually the lead problem,’ explains Brian Saunders from the University of Manchester. ‘We’re trying to address the lead problem.’ Whilst there are studies on lead-free perovskite solar cells, perovskite cells with the highest efficiencies contain around 30% lead in the photoactive layer, which is the part that absorbs light and turns it into electricity. 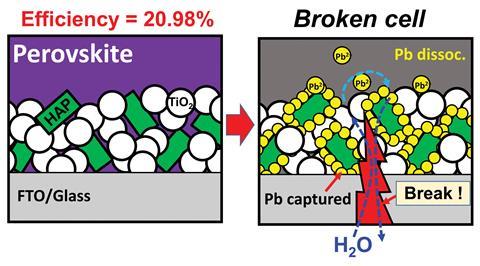 The perovskite solar cell designed by Saunders and his colleagues includes a mesoporous scaffold composed of TiO2 nanoparticles and hydroxyapatite nanoparticles. Hydroxyapatite, a crystalline form of calcium phosphate, is also the main constituent of bone. Just as lead can replace the calcium in bone, the team found that if their perovskite cell is damaged (by hail, for example) and then immersed in water, calcium ions within hydroxyapatite exchange with lead ions from the perovskite. This converts hydroxyapatite to hydroxypyromorphite and prevents the lead from being released into the environment. They found that using a ratio of 70% hydroxyapatite to 30% TiO2 in the electron transport layer gave the best results. 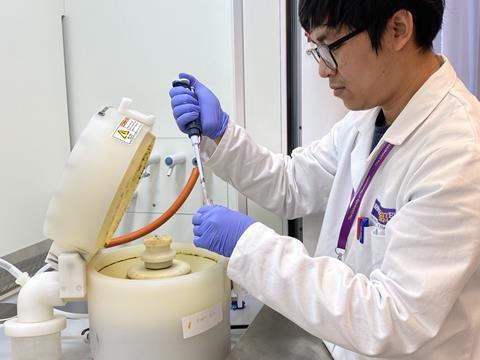 Previous methods for sequestering lead in perovskite solar cells focused on polymers that swell when they absorb lead. However, the mechanical integrity and longevity of polymers can be compromised if the cell is broken or discarded. Moreover, synthetic hydroxyapatite, has a higher density – so can absorb more lead per unit area than a polymer, and stores the lead safely as an inert inorganic mineral.

Perovskite solar cell experts are impressed by the work. ‘This study offers valuable insights into designs of in-device lead sequestration for safe deployment of perovskite photovoltaic technology,’ comments Yabing Qi, from the Okinawa Institute of Science and Technology Graduate University in Japan. And Trystan Watson, of Swansea University in the UK, says it ‘represents an important step in providing confidence that these new and emerging materials can make it to our rooftops.’

The team now intends to optimise the device so that it can capture 100% of the lead ions, as well as increasing its power conversion efficiency.