And then you’re dead: what really happens if you get swallowed by a whale, are shot from a cannon, or go barreling over Niagara 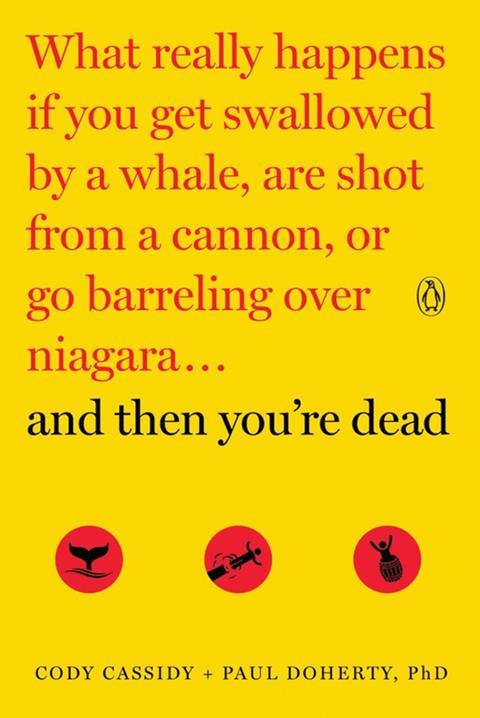 It might have been the bright yellow cover or the to-the-point title of And then you’re dead, but it is one of the few sciencey-sounding titles that attracted a lot of interest among my less scientifically inclined friends. One read a few passages and quickly decided that being swallowed by a whale – gory, but spectacular – would be her preferred way to depart this life. While I wouldn’t necessarily agree, I did enjoy the book, having read through it in just a few sittings.

In 45 short chapters, freelance writer Cody Cassidy and Paul Doherty, resident physicist at San Francisco’s Exploratorium museum, describe unusual, impossible, horrifying and somehow still funny death scenarios. With a good portion of black humour, the authors delve into the grisly details of being bitten by 400,000 mosquitoes, standing in front of 190 decibel speakers or going for a swim at the bottom of the Mariana trench.

While most of the scenarios rely on scientific facts, studies or speculation (like what would happen if you jumped into a black hole?) some are, surprisingly, based on first-hand experience. And a few of these stories, like that of the young scientist Anatoli Bugorski, are those of survival rather than death. In 1978, Bugorski was working at U-70, the Soviet Union’s largest particle accelerator, when a safety mechanism failed and his head got hit by a proton beam travelling at almost the speed of light. Bugorski survived and is still alive today. If the same happened at the much more powerful Large Hadron Collider, however, one would quickly die of radiation poisoning.

The book touches on many different areas of science – astronomy, physics, palaeontology and even some chemistry (in a chapter called What would happen if you ate the world’s deadliest substances?) – and doesn’t require any science knowledge. Along with its straightforward style this makes it suitable for younger readers. For those interested, the authors provide a further reading list, just in case you need to look up the frictional coefficient of a banana peel or want to know more about Justin Schmidt’s pain index for stinging insects. Unfortunately, many references come in the form of unmanageably long links.

If you enjoyed Philip Plait’s Death from the skies! or the more recent What if? by Randall Munroe you might also like And then you’re dead, although more scientifically curious readers might find that it skimps on the more in-depth explanations. While the book might not offer seasoned readers great scientific insights, its moderate price tag and fun style make it a great gift.