The theory is sound: you take a conventional small-molecule medicine and then attach it to a polymer and you get a new drug (a polymer-drug conjugate) that will have a longer in vivo plasma half-life than the drug alone (Figure 1). 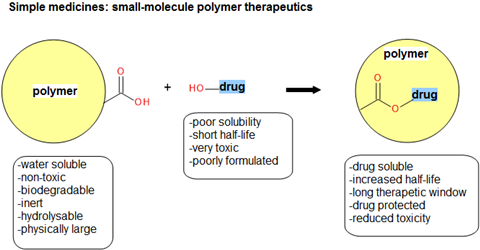 Polymer medicines are fertile ground for the pharmaceutical industry because they do not require research into new active pharmaceutical ingredients (APIs) or a new polymers. There may even be opportunities for the in-house pharmaceutical evergreening department to develop further intellectual property. And, for the clinician, there is confidence in using a medicine where the API is well known and has been used to successfully treat many patients groups in multiple therapies over many years.

Advances in small-molecule formulation have seen pharmaceutical companies seek to secure intellectual property rights for long-release (modified-release or sustained-release) formulations immediately following the identification of a new drug. The FDA has approved, as painkillers alone, 35 branded or generic ‘extended-release or long-acting opioid drugs’.1 It is a completely different story for small-molecule polymer therapeutics. There have been no approved small-molecule polymer therapeutics, in any field of medicine, since the inception of polymer-based medicines in the late 1960s.

Polymer conjugate products offer distinct medical advantages such as reduced toxicity, increased half-life, better pharmacokinetics/bioavailability and enhanced drug solubility. The new entity is sufficiently novel and non-obvious intellectual property, so it can be claimed as either a discrete structure or as part of a collective described by a Markush structure in the claims section of a patent. The polymers used in these therapeutics are subject to strict definitions to achieve high-quality products. They must be non-toxic, water-soluble, biologically inert, impart some form of physical protection to a drug, and be joined to the small-molecule via a hydrolysable link. Furthermore, they must not be attached to a potential site of action when connected to the small-molecule drug, and must be fully biodegradable (Figure 1). 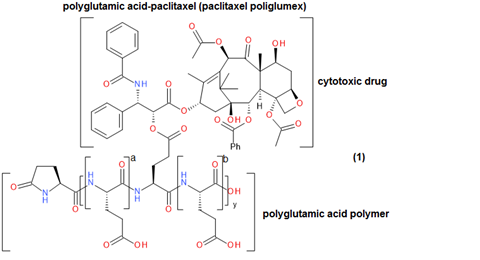 An example of this is polyglutamic acid (PGLA)-paclitaxel (paclitaxel poliglumex), which is a small-molecule polymer investigational drug that has shown promise in the treatment of a number of cancer diseases, (Figure 2).2 In patients, it demonstrated increased solubility, gradual drug release, a longer half-life, more rapid IV administration and greater passive tumour accumulation relative to paclitaxel alone. This small-molecule polymer conjugate was able to demonstrate a higher plasma concentration for a longer period of time – for multiple drug dose strengths – relative to unconjugated paclitaxel (Figure 3). However, paclitaxel poliglumex has still not gained FDA approval as a drug for any medical indication.2

Polymer conjugate products are also technically cheaper. Cost is the main determinant of initial drug discovery research and small-molecule drug discovery is prohibitively expensive, being estimated at $130 million per year in the US.3 The cost of a drug comprising a known polymer and existing small-molecule API is essentially zero thus circumventing initial discovery costs. Yet, despite these potential savings, there has been no wholesale pharmaceutical interest in the development of small-molecule polymer therapeutics.

There is a plethora of articles and reports promoting polymer medicines as a growing and progressive class of therapeutics.4 There are almost 40 small-molecule polymer therapeutics in clinical or preclinical evaluation, with 19% of this pipeline in Phase II and III, while 26% is in Phase I or Phase II. By 2026, it is predicted that there will be eight new approvals, of which two will be blockbuster medicines, from the small-molecule drug conjugates currently being evaluated. This would certainly constitute the basis for an exciting future in this class of therapeutics.4

A more critical analysis of this ‘good news’ reveals that the main contribution to polymer medicines comes from the delivery of biomolecules, such as enzymes, proteins, liposomes and monoclonal antibodies. In fact, of the currently approved polyethylene glycol (PEG) therapeutics, 14 are drugs where PEG is coupled to a large biomolecule, while only one is a small molecule (naloxegol) – where PEG is not a delivery polymer but an intrinsic part of the mechanism of action. How many of the 8 candidates reach approval and how many will fade away in Phases I, II or III is open to speculation. Further analysis reveals that only a handful of pharmaceutical companies are involved in small-molecule polymer therapeutic research. However, the most painful reality can be found at Drugbank Statistics, which shows 2,337 small molecule drugs approved for medical use, however, not one has been approved as a pegylated small-molecule medicine.5

Prescribing clinicians do have an important role here since they will routinely prescribe long-acting variants of well-established small-molecule drugs via modified-release and sustained-release formulations to increase the therapeutic window for a patient—especially where a drug has a short half-life. This is exactly the sort of setting that would support the use of small-molecule polymer therapeutics as every-day, long-acting therapies. However, once a patient begins responding well to a small-molecule medication there would be little incentive to move them to a newer small-molecule polymer therapeutic unless something goes wrong with the existing medication – as the saying goes, ‘if it ain’t broke, don’t fix it’. 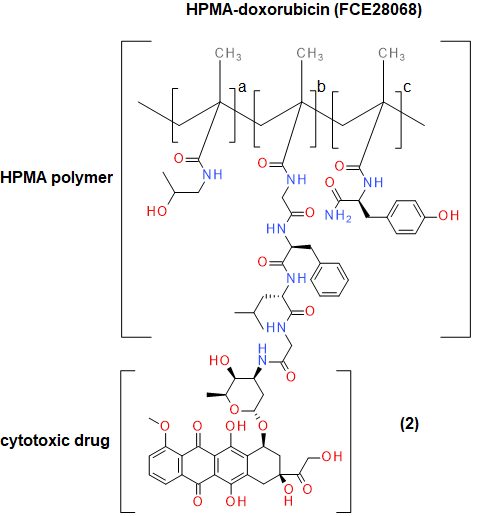 Small-molecule polymer therapeutics will always come in a poor second to small molecules, unless there is a pressing need to use them. An example where there is such a clinical need is in the trial testing of N-(2-Hydroxypropyl) methacrylamide (HPMA) coupled to doxorubicin (Figure 4) to give the corresponding conjugate. This has been used in the treatment of breast, lung and colorectal cancer.6 The major side-effect with therapeutic anthracycline derivatives such as doxorubicin is the rapid onset of cardiotoxic effects, in the form of congestive heart failure (CHF) resulting in 50% mortality.7 Patients currently receiving doxorubicin anti-cancer therapy are not able to have the effects of CHF treated. Studies have shown HPMA-linked doxorubicin to be five times less cardiotoxic, with large doses (1680mg/m3) showing no cardiotoxicity and anti-tumour activity still being observed at low concentrations (80–320 mg/m3).6

The use of a HPMA polymer-doxorubicin conjugate has generated great interest in clinical research simply because there are no safer therapeutic options available for the usage of doxorubicin in clinical medicine. Once again, however, this small-molecule polymer conjugate has still not found a regulatory pathway to becoming an approved medicine.

Then there is the issue of the whole polymer-conjugate structure itself—this appears as a precarious construct where two large components, such as a protein and polymer, are held together by a single point hydrolysable bond (Figure 5). Unsurprisingly, such bonds are prone to breaking prematurely and releasing both drug and polymer without any imparted half-life extension. Another issue found in PEG polymers is that there is only a single point at which a drug can be conjugated. This provides a very poor load capacity, which limits the efficacy that can be achieved if only one molecule can be added to the PEG chain. While polymers are supposed to be biologically inert, both antigenic and immunogenic responses have been identified in both animal and human studies.8,9 From a chemical perspective, there is considerable difficulty in combining a water-insoluble organic drug to a water-soluble biopolymer. There are few synthetic procedures that deal with these sorts of molecular conjugations in chemistry and they present a serious obstacle to achieving small-molecule polymer therapeutics in a research setting. Other chemical problems relate to the PEG polymer being an average – instead of fixed – molecular weight. This leads to longer and smaller chains being conjugated with a small-molecule drug but having different drug release kinetics.10 A casual observer of this area may notice that there seem to be only a few polymers considered ‘biopolymer worthy’. PEG, PGLA and HPMA seem to dominate this area but what about others?

The potential problem with PEG polymers

Finally, ‘polymer’ still means ‘industrial polymer’ and not ‘medical polymer’. Polymers, in general, appear to be victims of their own success because in a medical arena they are likely to be viewed as biopolymer materials rather than biopolymer medicines. In a related development, polymer therapeutics now have to deal with a new contender. The arena of carbon nanotubes (CNT) has rapidly grown from academic curiosity into the go-to answer in modern drug delivery. This has led many to move from polymer-drug conjugates to making functionalised nanotubes.11

Regardless, we must not give up on small-molecule polymer therapeutics. New pipeline drug candidates are currently being evaluated positively and touted as blockbusters, so cannot be dismissed. Assisting and familiarising pharmaceutical researchers with the area of small-molecule drug conjugates could open up this entire field. A dedicated information source on small-molecule polymer drugs could provide a multi-functional database covering the difficult areas of chemistry, drug information and intellectual property. This does not yet exist but could serve as a focal point for all researchers in this area. It could also change attitudes to small-molecule polymer therapeutics so they are seen in the same light as long-acting modified- and sustained-release variants of small molecules, and developed at the same rate.

The robust rationale behind small-molecule polymer therapeutics represents a good opportunity for your organisation to explore – especially with the limited competition in this arena at this time.