Amid fierce rivalries over the latest generation of cancer treatments, drugmakers have been weaving a complex web of collaborations on combination therapies spanning much of the pharmaceutical industry. As the true significance for patients of molecules that recruit or rescue immune functions to destroy tumours is becoming clear, their developers continue to seek ideal partner drugs.

The companies leading the immuno-oncology charge believe combinations will bring the long survival durations their treatments offer to wider patient groups. With analysts forecasting that total annual revenues from immuno-oncology drugs will reach around $20–30 billion (£13–£19 billion) within a decade, these collaborations will help other firms to cash in too. And if the strategy benefits the many cancer types targeted, the boon to patients will be tempered by doubly-expensive prescriptions that healthcare systems are yet to adapt to. 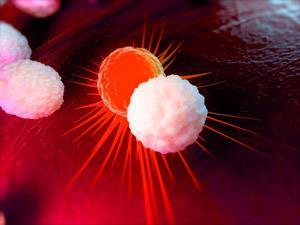 Combination immuno-oncological therapies grabbed the headlines in May when Bristol-Myers Squibb (BMS) brought together its two monoclonal antibody ‘checkpoint inhibitor’ drugs, showing a greater benefit than either one individually. It gave one third of 935 patients with previously untreated advanced melanoma Yervoy (ipilimumab), one third Opdivo (nivolumab), and one third both of them together. The median average for progression-free survival was 2.9 months for Yervoy alone, 6.9 months for Opdivo, and 11.5 months for both together.

These drugs thwart the devious ways some tumour cells stop our immune system identifying and destroying them. Such tumour cells produce proteins that activate ‘checkpoint receptors’ on lymphocytes such as T-cells. Healthy tissues normally make these proteins to stop lymphocytes attacking them, and tumour cells’ masquerade leaves them safe to proliferate. The drugs block the checkpoint receptors, with Yervoy targeting cytotoxic T-lymphocyte antigen 4 (CTLA-4) receptors and Opdivo targeting programmed cell death 1 (PD-1) receptors. So far, these drugs are largely used when other treatments fail.

The US Food and Drug Administration (FDA) approved Yervoy in 2011, and Opdivo in September 2014, making BMS the first company able to create a dual checkpoint inhibitor combination. But that combination is not without its shortcomings. 55% of advanced melanoma trial patients on the combination experienced severe side-effects like colitis, diarrhoea and rash, causing a third of them to stop taking the drugs.

Other developers therefore hope their monoclonal antibody checkpoint inhibitors can provide similar benefits, without such serious adverse effects. One is Merck & Co, whose PD-1 blocker Keytruda (pembrolizumab), was also approved in September 2014. The company is primarily focused on Keytruda as a monotherapy, explains Roger Dansey, senior vice president, global clinical development oncology. In part that’s down to its safety advantage. ‘It doesn’t have the panoply of injuries that you can get with chemotherapy,’ Dansey explains.

Another reason is that median ‘progression-free survival’ data masks checkpoint inhibitors’ ability to grant a few cancer patients strikingly long lives. After treatment with Yervoy, for example, some advanced melanoma patients have survived for up to 10 years. ‘One of the hallmarks of pembrolizumab – and all these immunotherapies – is this very prolonged effect, if an effect is achieved, and that’s really a game-changer,’ Dansey says. 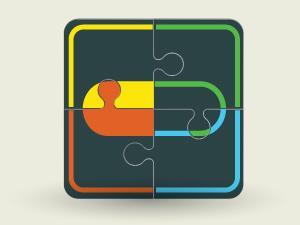 The flipside of that effect is partly why Merck has also been very active in setting up trial collaborations that combine Keytruda with other drugs. To respond to Keytruda alone at an enhanced rate, patients’ tumours may have to produce high levels of the PD-1-activating protein ligand, PD-L1. Consequently, only around a quarter to a third of the population respond, a very different situation to the more common targeted cancer drugs. ‘In targeted therapies, often response rates are quite high but the responses are relatively short,’ Dansey underlines.

Aspiring to both high rates and long durations of response, Merck is consequently taking Keytruda into clinical trials with anticancer treatments being developed by at least 10 other companies. Dansey groups potential partner drugs broadly into four categories: other immunotherapies; vaccines; targeted therapies and chemotherapies. He particularly highlights Merck’s collaboration with Amgen, whose T-Vec (talimogene laherparepvec) treatment is a virus that infects cancer cells specifically, triggering a different mechanism for their destruction by our immune system. ‘There’s an obvious potential synergy between producing an immune response and then activating that further with a checkpoint inhibitor,’ he underlines.

AstraZeneca (AZ) and its subsidiary MedImmune have concentrated on combination therapies. AZ’s checkpoint inhibitor, MEDI4736, entered a Phase III monotherapy clinical trial for lung cancer in May 2014, targeting the PD-L1 signals rather than the PD-1 receptor. But Mohammed Dar, vice-president for clinical development oncology at Medimmune, highlights that novel combinations are needed to corner cancer. ‘As we learn more about immuno-oncology, it’s becoming very apparent that cancers can hijack multiple mechanisms to escape destruction by the immune system,’ he explains.

Dar highlights the three stages patients’ immune systems go through in fighting cancer. First, the cancer cells must produce antigens that give them away as undesirables. Second, lymphocytes like T-cells recognise the antigens and are activated, with checkpoint signals like CTLA-4 and PD-1 tuning the activation level. Third, the lymphocytes home in on the tumour and destroy it. ‘In that third step, the tumour microenvironment can throw up a number of roadblocks that can turn off activated T-cells,’ Dar highlights.

By targeting the patient’s own immune system rather than tumours, immunotherapy has the potential to be broadly applicable. ‘With each passing year that new data are presented, the number of tumour types amenable to immunotherapy appears to be increasing,’ Dar says. However, the low response rate observed with PD1/PD-L1 monotherapy indicates that these drugs cannot generate a new immune response, only rescue a pre-existing one, he explains. ‘So far drugs like MEDI4736 focus solely on the second and third steps in the immune cycle. But if you never have the first step take place, there are no T-cells to rescue and activate. That is why the vast majority of patients still derive limited benefit from monotherapy. You’re going to see more and more combinations that target those people.’

Potential in-house combinations for MEDI4736 include with AstraZeneca’s own CTLA-4 blocker, tremilimumab, and the small molecule tyrosine kinase inhibitors Iressa (gefitinib) and AZD9291. It also has a series of external clinical trial collaborations, including on Innate Pharma’s inhibitor of the NKG2A checkpoint that regulates both T-cells and natural killer (NK) cells. Other partners, like Novartis, Incyte and Eli Lilly, are also all working with other checkpoint inhibitor developers. 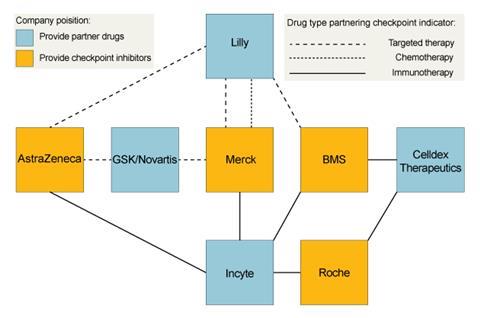 Lilly says it is using its approved therapies to make it a node connecting BMS, Merck and AstraZeneca, while continuing to develop earlier-stage products. The collaborations are designed to provide information about different combination therapies’ potential says Richard Gaynor, senior vice president of product development and medical affairs for Lilly Oncology. ‘We believe combination therapies will be key to addressing tumour heterogeneity and resistance that is likely to develop to even the most promising new tailored individual therapies,’ he says. ‘Exploring combinations of complementary types of individual therapies provides different angles to attack the tumour and reveal increased survival treatments.’

Lilly is focusing on three areas, one of which is immunotherapy, and another the microenvironmental niche of blood vessels and biochemical messages that surround and support tumours. The final area covers tumour cell signalling more broadly, including cancer metabolism and epigenetics. Exploiting the opportunities in these areas is a greater motivation to collaborate than overcoming the continuing challenges of cost, difficulty and risk in drug development, Gaynor says. ‘Our own laboratory research is the backbone of our development efforts, but we also believe it is vital to identify fruitful external collaboration partnerships,’ he adds. ‘In fact, half of Lilly’s currently marketed medicines have been brought to patients through collaborative research.’

Adding to the armamentarium

While there is undoubtedly powerful interest in immuno-oncology, Srikant Vaidyanathan, partner and managing director at the Boston Consulting Group, is not surprised by the number of collaborations. 40% of all drugs in pharmaceutical companies’ pipelines are in oncology, but it’s unusual for a single treatment to eliminate solid tumours on its own, he emphasises. There’s therefore a vast array of potential combinations, and checkpoint inhibition lends itself well to many of them.

‘Immuno-oncology has a broad range of applicability,’ Vaidyanathan explains. ‘You can use it as a backbone and put in other targeted therapies for specific indications.’ The announced collaborations are only the tip of the iceberg, he says, as trials for combinations with therapies already on the market don’t need to involve their manufacturers. Increasingly sophisticated understanding of factors like cancer genetics is also allowing better combination choices from the large pool of possibilities, he adds.

However, Vaidyanathan warns that the benefits such combinations promise will bring a new set of affordability challenges. ‘They’re all expensive drugs that are being combined, and so the therapy would become even more expensive,’ he says. ‘It’s going to have quite an impact on the budget of the healthcare system. It’s something that people haven’t best figured out how to manage, as real combos haven’t hit the market yet. It’ll take the system a few years.’

But perhaps that price is worth paying, if the checkpoint inhibitors live up to the promise foreseen by MedImmune’s Dar. ‘The emerging data suggests that this approach is likely to transform the way we treat cancer,’ he stresses. ‘It will likely represent a new pillar separate from surgery, radiation, chemotherapy and targeted therapy that will become a permanent fixture in the armamentarium for cancer treatment. But no single target alone will be sufficient. You need to do combinations and no one company will have all the possible agents that target each of these key pathways.’