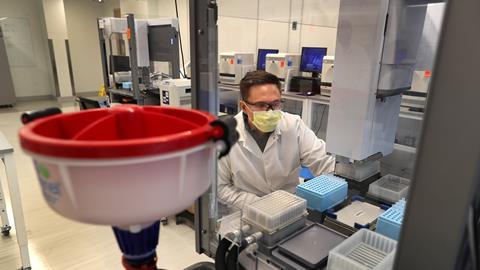 Is a robot coming for your job?

The rise of automation in the chemistry lab

Since the beginning of the pandemic, automated chemistry has moved up the priority list for many companies, says Paul Whittles, sales director at Deepmatter, a Glasgow, UK, based company developing tools for automated chemistry. The current situation means many companies are working at 25% lab capacity, but with completely automated synthesis, chemists sitting at home could program a robot to keep the lab working. ‘It’s something which people have been dreaming about for quite a while, but at the moment [the idea is] being taken more and more seriously by more and more people,’ says Whittles.

‘Automating chemistry isn’t actually that new,’ Whittles continues. ‘It’s something that people have been trying to do since the early 90s.’ But the last decade has seen an explosion in its use and in tools commercially available to carry it out. Now, says Michael Schneider, chief executive officer of automation specialists Chemspeed, based in Basel, Switzerland, ‘it is pivotal for anyone in order to stay competitive in research and development and quality control’. Richard Bourne from the University of Leeds, UK, agrees that industry is on board – he has worked with GlaxoSmithKline, AstraZeneca and Pfizer on automating their process chemistry, and these companies are already looking to a future of labs with vast arrays of robotic handlers.

Automation can be applied to almost any type of chemistry at any scale, from automating reaction conditions to using robots to manipulate reagents and carry out complete reactions. Bourne is developing automated flow systems that provide online control for late stage pharmaceutical development, but automation is also being used by the Materials Innovation Factory (MIF) at the University of Liverpool, UK. ‘That’s where it’s really exciting,’ says Liverpool synthetic materials chemist Anna Slater. ‘You can use automation in the materials space to give you a benefit that hasn’t been seen before.’ The MIF, which opened in 2018, uses robotics and automation, and has already spun out CageCapture – a company using nanocage molecules to filter toxic pollutants from the air.

For medicinal chemists the ultimate aim is to automate an entire workflow from design and synthesis through to assaying and analysing – sometimes called the DMTA cycle (design, make, test and analyse). ‘It’s quite a challenge, but that’s what they’re trying to do,’ says Steve Coles, chief technical officer at Deepmatter. ‘If you can take [the process] from 90 days down to 20 days, then that’s a four-fold increase in the amount of candidates you can screen.’

Speed is not the only advantage that automation provides. ‘You get increased productivity, increased yields, increased product purity, decreased rejects, decreased waste and disposal costs,’ says Ben Taylor, technical and R&D manager at Essex-based Radleys in the UK, a glassware and instruments manufacturer that produces automated reaction stations. Taylor adds that automating reactions can increase safety by allowing greater control of reaction conditions. Plus, says Bourne, automated processes are also more reproducible. ‘That’s really important in the pharmaceutical industry. It makes it easier for them to then scale up their processes.’

‘The bit that’s really exciting for me is the amount of information you can get about your process and the understanding that you can build,’ says Slater. ‘That may point you in a direction that is really unexpected.’ Automated systems can collect massive amounts of data, such as temperature or pH, at millisecond intervals, and some of the latest advances allow this data to be fed back. For example, explains Coles, ‘by collecting data, we should be able to say your reaction is over, so you don’t need to keep on boiling into the next two days’.

Automation is unlikely to work for all chemistry though. ‘Handling solids is still pretty difficult,’ says Coles, ‘and some solids are worse than others. A Grignard reaction, for example, uses powdered magnesium, which is not a very safe thing to use.’ Bourne adds extremely exothermic reactions and air sensitive chemistries to that list: ‘These sort of platforms are much more suited to routine chemistry where you can almost write a very classical recipe.’

Even where automation is possible, not everyone is sold on its advantages. Oliver de Peyer, application specialist at Peak Analysis and Automation, based in Farnborough, UK, has worked on lab automation in industry and academia and says he has experienced widespread scepticism. ‘People have said to me, “If you were a real scientist, you’d do it by hand”, and “It’s fundamentally lazy to do it by robot.”’

There seems to be a fear that automation will not only supplant the role of the bench chemist but will change the culture of everyday lab science. ‘Changes mean leaving the comfort zone,’ accepts Schneider, but he believes automation will be swiftly adopted as more and more chemists see the advantages.

Undoubtedly, automation will change the role of the chemist, but perhaps that will be a good thing. ‘It will free up chemists who typically do really laborious repetitive work to actually think about the science behind it,’ says Bourne. The balance of time chemists spend in the lab and in the office is likely to shift further towards the office, with chemists becoming what Coles calls ‘information workers’. This may allow for more intellectual curiosity, which de Peyer says ‘often gets lost in scientific research, because of the sheer repetition and drudgery of doing a lot of it’. He hopes automation might even have a positive impact on the PhD experience. ‘It [will no longer be] down to you working 80 hours [a week] in the lab, you won’t have that degree of physical stress.’

But most of those currently in the field don’t believe that automation will reduce the number of chemists we need. ‘The shift will be to optimising the synthesis robot’s time by not asking it to make things that won’t work,’ says Coles. And Slater is sure that there will still be a need for ‘tinkering around’ in the lab. ‘Part of formulating the right problem for automation is understanding the chemistry and part of understanding the chemistry is doing it.’ She still carries out early exploratory experiments in round-bottomed flasks, before moving on to more automated methods.

Automation will change the role of the chemist, but perhaps that will be a good thing

There may be less need for technician roles that are heavily based on repetitive laboratory work, but today most technicians are already highly knowledgeable specialists, and it’s more likely that automation will create a whole host of new roles for maintaining and running automated systems.

The growing importance of lab automation has implications for the sorts of skills undergraduates need to acquire. Although chemists clearly need practical skills, ‘if you ask anybody what else we should be teaching our students in chemistry, coding is at the top of [the list]’, says Slater. Knowledge of languages such as Python is essential for coding some current automated systems. The University of Bristol, UK, now offers a degree in chemistry with scientific computing, and others are likely to follow.

But ultimately what’s important for undergraduates is exposure to lab automation, says Schneider: ‘It is not really about special skills, it is mostly a mindset thing.’ Many companies say that soon their platforms will provide user-friendly interfaces that will allow anyone to set up experiments.

While robots may not be coming for your job just yet, it may be a different matter once automation is coupled with advanced artificial intelligence. ‘In maybe 10-20 years’ time, I could see that there will be models with AI, where you basically send a request to a web server, that web server runs the chemistry that you want it to look at, and you get a result back. And it’s all done in a fully automated way in a few hours,’ says Bourne.

We may already nearly be there. In 2020, IBM Research Europe and Chemspeed launched RoboRXN, an automated chemical synthesis platform that combines IBM’s predictive retrosynthesis machine learning model with an automated robotic rig to produce molecules in a remote laboratory. All that’s needed is to type in the chemical to be synthesised and a combination of AI, cloud technology and chemistry automation does the rest. The AI model has been trained on a large number of chemical recipes and can recommend the correct sequence of operations to synthesise a specific target molecule with minimal human intervention.

Other labs have been using a combination of deep learning and automation to make decisions on the sorts of experiments to carry out. In 2018, an AI-powered robot, Eve, developed by scientists at the Universities of Manchester, Aberystwyth and Cambridge in the UK, identified common toothpaste ingredient triclosan as an anti-malarial drug candidate. Using a yeast-based assay, Eve was able to automatically develop and test hypotheses and then run follow-on high-throughput experiments to find molecules that could target an enzyme found in malaria parasites.

Andrew Cooper at the University of Liverpool recently published work carried out by his intelligent mobile ‘robot scientist’, which also has the capacity to beat even the most dedicated PhD student, working 21.5 hours a day. The robot uses a search algorithm to plan experiments based on the outcomes of the previous ones, and from 688 experiments conducted over eight days discovered a new catalyst. The 400kg robot is the size of a person and can work alongside human scientists, roaming around the lab to access sample vials, and using the same instruments and equipment designed for human scientists. Whether such robot scientists can keep up with the lab gossip remains to be seen.

‘It feels like a turning point where [automation] will be used more and more,’ says Slater, ‘I think these tools will be used in new and unexpected ways and will impact the kind of science that is done and the kind of advances that are seen.’ But she adds, ‘it’s not going to solve every problem that chemists have!