Chemists in Switzerland have developed a standardised console for the automated synthesis of complex organic molecules.1 Using prepacked capsules, and requiring minimal involvement from the user, this instrument produces and purifies drug-like compounds at the push of a button. 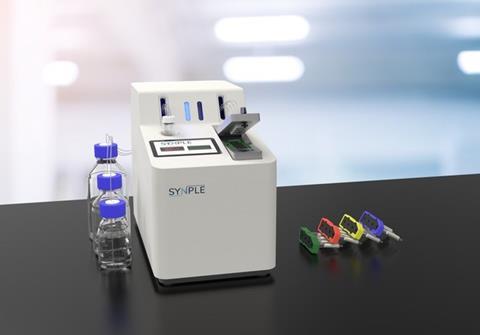 The team behind this automated organic synthesis machine hope organic chemists will use their systemt o become developers who package their methods into integrated, user-friendly packages that can be used immediately in a safe and convenient fashion

Automating chemical synthesis has been a long-standing goal in the scientific community, and with ever-increasing technological capabilities, the field has experienced vast progress in recent years. Traditionally, automated reaction systems perform simple, iterative reactions to make chain-like molecules such as peptides, DNA and oligomers. As automated synthesis capabilities have expanded, many scientists have turned their attention to making more specialised target molecules. Humans would typically make these molecules in the laboratory, which requires, amongst other things: time, technical expertise and a myriad of scientific equipment. Whilst automated systems invariably save time, most current methods still require significant manual input (programming, set-up and cleaning) and non-standardised equipment (glassware, stirrer plates and heaters). 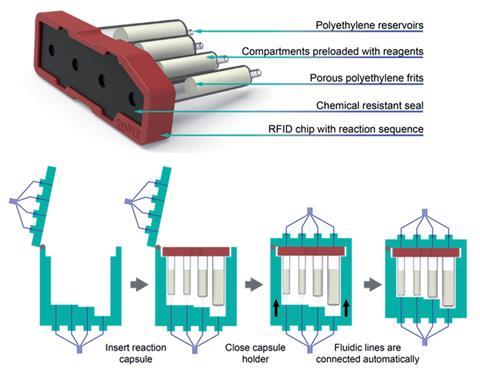 The capsule consists of four compartments that are prefilled with the necessary reagents. A chemically resistant seal on top and luer connections at the bottom interface with the console

To overcome these challenges, Jeffrey Bode’s team at the Swiss Federal Institute of Technology, ETH Zurich and industrial collaborators at Synple Chem AG have developed a capsule-based system with a standardised set up. The instrument features simple glass or Teflon containers, rotary valves, syringe pumps, stirring and heating elements, an RFID scanner and a touch screen all neatly packed within the console. Reactants and purification media come prepacked in polyethylene capsules that are easily loaded onto the console. Then, instructed by a short script, the instrument directs the flow of the reaction medium to perform a series of chemical manipulations in each of the cartridges. The net result is a safe and reproducible reaction system that requires limited technical knowledge and input from its user. ‘[It’s] like a capsule-based coffee maker – just for chemical reactions,’ says Bode. ‘Of course we can make coffee with a stove, kettle, filter, filter paper, etc, but it’s easier and more reproducible to use prepacked capsules, where all we need to do is push a button.’

In 2013, Bode’s group invented the stannyl amine protocol (SnAP).2 SnAP chemistry uses a copper catalyst to make saturated N-heterocycles from stannyl amine and aldehyde precursors. The methodology has since been adopted industrially but has some drawbacks that inspired the group to automate the chemistry. ‘[The] reaction was labour intensive and there were some issues with supplies of the copper reagents. We wanted to make our chemistry easy to do and completely reproducible,’ says Bode. Here, they translated the SnAP protocol to their capsule-based set up where the user needs only to select and weigh an aldehyde starting material – the instrument then does the rest of the work. It loads the aldehyde onto a functionalised resin in the first capsule to generates the reactive SnAP precursor. Next, it is directed into a cartridge where a copper catalyst completes the cyclisation reaction; the active copper catalyst complex is generated in situ during this stage, overcoming previous issues with the copper reagents. Finally, the third and fourth pre-packed cartridges perform work-up and purification steps to deliver the desired heterocycle with high purity. The group also performed a series of widely used reductive amination reactions using a slightly modified set up.

With a few tweaks, the researchers performed sequential cyclisation and amination reactions, demonstrating the potential of their new system to make complex organic molecules. ‘This is a neat piece of work that makes some materials handling simpler for some automatic basic chemistry,’ says Lee Cronin from the University of Glasgow, UK, an expert in automated chemical synthesis. ‘Although the system itself is does not yet appear to be modular it is easy to imagine that several systems might be linked together to expand the architecture. Also, [it has] a genuine synthesis standard using a code-to-chemistry generator, [which] will allow the mapping of the reaction to the reactor architecture. This should be the next big step.’

Bode recognises that the new instrument ‘can’t do everything … but it can do a few things well and completely hands-free.’ The group are actively developing the console to expand the types of reaction it can perform. Ultimately, they envision that the instrument will expedite the synthesis of compound libraries for drug discovery, ‘we postulate that a handful of good assembly reactions and a few hundred common building blocks can be assembled into millions of molecules… [which] will play a big role in fully automating and democratising drug discovery.’