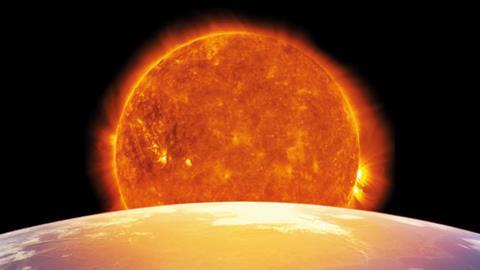 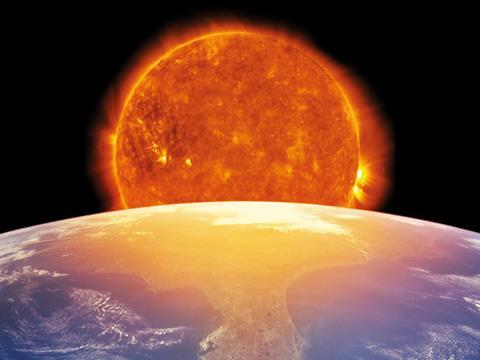 If you think Charles Darwin and molecular biologists have got evolution cracked using genetics, think again. In our opinion, they have missed the very important role of chemical changes in the environment.

The initial composition of Earth was dictated by the chemical content of the matter that condensed to form planets in the solar nebula. The best way to study this is to look at the composition of chondrites, stony meteorites that hit Earth without being modified by melting or differentiation of the parent body. Critical for the emergence of life on Earth was the later introduction of water, probably from volatile water-rich comets. After water’s arrival, Earth existed in three distinct phases: atmosphere, sea and minerals.

Between the period of 4.5 to 3.5 billion years ago, Earth evolved chemically to become an approximately stable state that was still susceptible to weathering on its surface and volcanic eruptions from the interior to the exterior. By the end of this period, the sea had become a strong solution of sodium, potassium and chloride. It was also a dilute solution of magnesium, calcium, bicarbonate and phosphate. And a more dilute solution again of iron (Fe2+) and manganese. Trace elements such as nickel, zinc and molybdenum were present in greater dilution still, and the water also contained the slightest amount of copper and cadmium.1 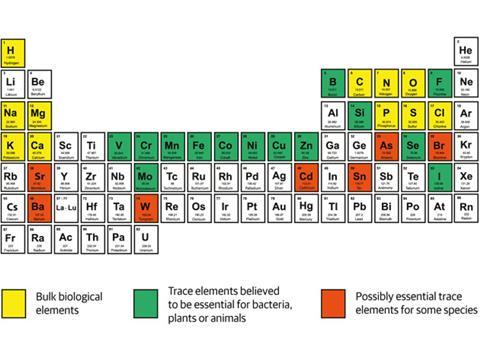 The seawater evaporated and rain continuously dissolved out silica, silicates and some sulfides. This caused erosion and the formation of sediments, both on shores and on the sea bed. The flow of water over the land removed much of the calcium from it and caused the formation and accumulation of numerous carbonate minerals by reaction with atmospheric CO2. This in turn reduced the amount of this gas in the atmosphere.

The anaerobic atmosphere was probably initially rich in nitrogen and ammonia with considerable amounts of methane, CO2 and hydrogen.2 The light gases H2 and CH4 were quickly lost from the atmosphere to the stratosphere. We consider that this early evolution of inorganic chemistry in the atmosphere and sea was a controlling factor in all of evolution’s destiny.1

Beginning of organic chemistry and life

The action of sunlight on Earth’s surface produced organic chemicals by reduction of CO2 with hydrogen in water within a lipid membrane. The supply of hydrogen came first from environmental H2, then by energisation from H2S and finally from water. The C/H/O compounds combined with ammonia in the atmosphere to give more complicated chemicals. We do not know how the complex chemistry of the first anaerobic (no oxygen) cells arose but it was limited in both organic and inorganic chemistry by the environment. At some stage protein synthesis fell under the control of DNA and RNA. The details of the internal cell chemistry required catalysts and more energy for the further synthesis of proteins, saccharides, lipids and nucleotides.

The two most readily available catalytic inorganic ions for early cells were iron and magnesium, with some manganese and nickel, all available from the sea. The iron and nickel were used in reductive reactions1,3 while magnesium was a partner in energised condensation reactions – the removal of water, by pyrophosphate first and then by the nucleotide adenosine triphosphate, ATP, both bound by Mg2+. These pyrophosphates were synthesised by energy from the sun. The two most available ions, Fe2+ and Mg2+, were in fast exchange between pathways, acting as their coordinating controls. 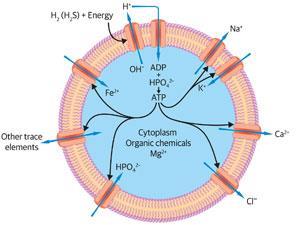 Energy capture and synthesis of organic molecules inside cells would have given cells an internal osmotic pressure greater than that of the sea. To maintain osmotic stability Na+ and Cl– were rejected but in order to control internal electrolytic neutrality, K+ and phosphate were taken in. One other cation had to be rejected, Ca2+, since it would have conglomerated organic compounds in cells. These gradients, like all limited element availabilities, were a controlling factor in evolution’s unavoidable destiny.

Clearly the cell needed much energy in a form that could be used to synthesise molecules and create gradients. All the machinery inside the cells for catalysis, light transduction, pumps and synthesis was based on selective proteins. It is a complete mystery as to how this chemistry evolved and how it later became coded and cooperative. Many features were necessary before there was a code (DNA). Clearly the specific uses of certain inorganic chemicals was unavoidable due to their particular availability and properties, while the synthesis of particular organic molecules was probably controlled by their considerable kinetic stability.

Once the anaerobic cell took hydrogen from water, using energy from light, there was the unavoidable production of oxygen.2 Inevitably the rejected oxygen quickly oxidised H2S and all vulnerable elements and compounds in the environment in the order of their redox potentials, Fe2+ to Fe3+, H2S to SO42– followed later by, for example, ZnS to Zn2+ and SO42–.

We believe this unavoidable sequence of environmental oxidations led to the well-established stages of cellular development, as these chemicals back-reacted with the first anaerobic cells to give partially oxidised organic chemicals. Cell complexity and compartmentalisation had to follow as any new oxidative organic chemistry could not occur inside cells with reductive synthesis. The cells, called micro-aerobic, could now obtain energy and elements by reduction of SO42– and NO3– as well as of Fe3+ ions with internal reducing agents. These and many other cell chemistry changes are deduced from the chemistry of parallel organisms alive today.

Evolution of the new eukaryote cell

Fossil evidence4 indicates that around 2.5 billion years ago a new type of cell, the single-cell eukaryote, appeared. Some of these cells used light and eventually became plant cells, while others led to animal cells. These cells were totally dependent on oxygen to make membrane cholesterol which gave the cell a larger size and a flexible state. They could also take advantage of the environment based on signals aided by opening of the membrane to the gradient of calcium that had formed unavoidably in the earliest cells. The calcium ion also bound proteins, linking some cells to solid surfaces such as sediment particles.

The novel cells had many internal vesicles, including the organelles mitochondria and chloroplasts derived from captured bacterial cells. These eukaryotic cells had a few new external oxidative copper and molybdenum enzymes5 and a new nuclear structure. Associated with this nucleus there were a few zinc proteins called zinc finger transcription factors. The eukaryotes had no genes for reducing nitrogen to ammonia, which is required for protein and nucleotide synthesis, and so became totally dependent on the prokaryotes. We consider that this symbiosis with prokaryotes together with the organelles from incorporated bacteria destroys the idea of evolution along independent branches of a tree.

About 2.0 billion years ago, there followed a lull in free oxygen increase after it had risen to about 1% of its present value. Oxygen had already oxidised much of the iron in the sea from 3.0 to 2.0 billion years ago to form the sedimentary rocks known as banded iron formations. After this point, the oxygen which was continuously produced was now involved in unavoidable buffered reactions while oxidising the large amount of sulfide and the remaining reduced iron. The sea today is consequently rich in sulfate. In the same period organisms developed only slightly. In our opinion these data together with that of earlier use of the changing environment and of symbiosis illustrate the closely coordinated evolution of the environment and organisms.1,3 There was a single ecosystem.

Now after the limiting buffered condition from 2.0 to 1.0 billion years ago had been removed there followed a second inevitable rise of oxygen since organism numbers increased rapidly and evolved more oxygen.2 This gave increased oxidation of the environment to approximately today’s values, as determined by studies of sediments. 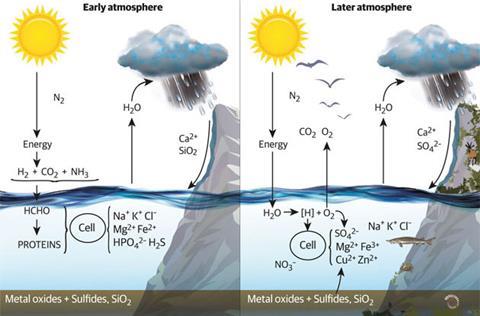 The sea now contained higher concentrations of metal ions, especially copper, zinc and molybdenum released from sulfides. Novel cellular organic chemical changes used these metal ions in enzymes that oxidised molecules on the cell surface, and later in cell cross-linked connective tissue. These reactions led to the large multicellular structures seen in fossils.4 Many such cross-linked cells, the multicellular eukaryotes, were contained in an outer membrane equivalent to a skin. The cells differentiated and later the specialised cells came together to form organs, especially during the Cambrian explosion 0.54 billion years ago. Zinc enzymes were used to hydrolyse this cross-linked connective tissue to allow growth. To coordinate growth, the cells synthesised novel small molecules called hormones. The coordinated – but slow – activity of organisms was controlled by binding of the hormones to transcription factors, many of which were a greatly increased number of exchangeable zinc fingers.

The cells in these eukaryotes also needed messengers for fast action – transmitters such as adrenaline. These transmitters were made and stored in vesicles from which they were released by calcium triggering, stimulated by environmental change. Both hormones and transmitters were synthesised by copper and iron oxidases. All this new chemistry was deduced from the chemistry of today’s organisms.1 It is again clear to us that evolution was cooperative between the unavoidable changes in the environment and organisms. Overall much of this evolution was driven by increases in oxygen, copper and zinc.

The last novel very fast messengers to arise were the nerve cells, needed by animals to coordinate their very fast activity. The messages that travelled along the nerves were due to the depolarisation of the charged gradient of Na+/K+ across the membranes of the nerve extensions. This depolarisation was initiated by events external to cells causing calcium invasion. The gradients evolved from their unavoidable creation in the very first cells. This, like other major changes in organisms’ chemistry, occurred closely at the same time in a range of organisms linked to oxidative changes in the chemistry of the environment.5 Coordination of the nervous system gave rise to the brain by about 0.5 billion years ago.

A critical problem for this description of evolution is how it is linked to reproduction via DNA. It is unlikely that these large changes, requiring novel proteins, could be due to random mutation in our opinion, especially as the same changes occurred almost simultaneously in many kinds of organism. We have therefore looked for other possible causes of the DNA change. One possibility, that of local gene multiplication, is known to be stimulated rapidly by the action of molecular drugs prior to local rapid mutation in the duplicated DNA sections.6 Novel environmental chemicals, especially metal ions, are effectively poisonous. They could well have caused duplication followed by rapid mutation which could explain the evolutionary coupling of genes with the environmental changes.

During all this evolution complexity increased to reduce the strain of the novel environment in more advanced organisms. They became dependent on lower organisms, greatly increasing symbiosis. We consider that the Darwinian tree of evolution should be replaced by organism development integrated with changes in symbiosis and in the environment.6

The evolution of environmental and organism chemistry stopped some 400 million years ago when free oxygen virtually ceased to increase in the environment.2 We accept that random selection of the greatly increased variation in species along evolutionary branches is true. In this period the increase in the power of the brain eventually gave rise to man. Using his brain, man was able to understand the chemistry and physics of all materials. By his actions based on this knowledge he discovered how to create new compounds from any of the elements so altering chemicals in the environment. This is a quite novel – but now rational – chemical way of changing the environment, which will affect all organisms. The question arises as to whether humanity can control these changes.

In our opinion the observed changing dependence of organisms on environmental inorganic chemistry, due to oxygen release by organisms, requires a very careful reassessment of the cooperative driving forces in evolution.

Bob Williams and Ros Rickaby are both academics at the University of Oxford, UK, and are co-authors of the new RSC book Evolution’s destiny