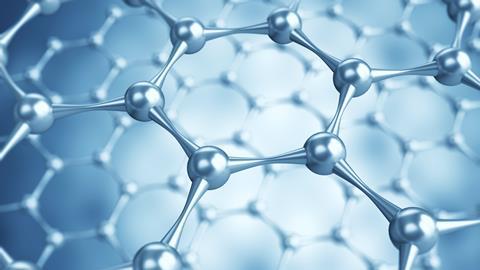 Thousands of 2D materials are just waiting to be discovered

Chemists have pinned their hopes on two-dimensional materials, such as graphene and hexagonal boron nitride as offering them a route to new electronics and technologies. Some of the materials have not yet lived up to expectations, but now, researchers from Switzerland hope to vastly expand the chemical space of 2D materials and so offer technologists a range of off-the-shelf materials that could be chosen with a particular set of properties for a given application.

Nicola Marzari of the Swiss Federal Institute of Technology in Lausanne (EPFL) and colleagues there and at the Vilnius University Institute of Biotechnology in Lithuania, began their search for new 2D materials by looking at more than 100,000 unique, experimentally known three-dimensional compounds. The researchers then narrowed this down to a shorter list of almost 6000 that appear to exist as layered compounds. Such compounds could be exfoliated like splitting layers of slate but on the molecular scale. Ultimately, it should be possible to slough an atomic layer from such materials just as a layer of 2D graphene can be pulled from 3D graphite using sticky tape.

With this list in hand, the team then applied calculations based on van der Waals density functional theory (DFT), which they could corroborate with experimental structural data and calculated binding energies. This allowed them to shorten the list to nearly 2000 compounds. These materials, they suggest, have the requisite geometric and bonding criteria that should make them relatively easy to exfoliate and so produce many novel 2D materials for further study.

However, being exfoliable doesn’t mean these 2D materials will be of any use. Consequently, the team then focused on the most promising 1036 of those 1825 that could perhaps easily generate 2D materials and then investigated them further in terms of specific physical and electromagnetic properties. Of a subset of 258 materials, they discovered 56 ferromagnetic and antiferromagnetic systems, including half-metals and half-semiconductors. This greatly expands the list of predicted 2D materials and could fill the gaps in the characteristics and properties of the likes of graphene, phosphorene and silicene, for instance. 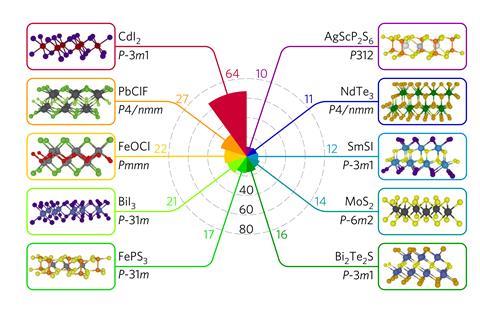 The other 2D materials in the longer lists remain to be studied for properties not yet needed for future applications. ‘In particular, many opportunities might arise from materials with reduced symmetry or involving more than two atomic species but still with relatively simple structures; the identification of the most common prototypes could also allow to further expand the list of 2D materials by chemical substitutions and alternative site decorations,’ the team reports.

‘This paper shows very clearly the fantastic diversity of 2D materials,’ says chemical physicist Jonathan Coleman of Trinity College Dublin. ‘We have all been aware that the family of 2D materials has many members but this paper quantifies this for the first time, using very broad data collection algorithms to analyse a very large number of crystalline solids for evidence of 2D character.’ He adds: ‘This is a breakthrough which will allow us to open the field much further.’

Torben Daeneke of the Royal Melbourne Institute of Technology is equally enthusiastic. ‘These materials have the potential to revolutionise the design of electronics and make technologies such as spintronics a reality,’ he says. ‘The work will certainly inspire us synthetic chemists, who will now race to the labs to realise these materials.’

‘The next step is finding, of course, interesting materials for electronics, catalysis, membranes, to mention a few,’ Marzari says. ‘The first “child” discovery [from this research] is also out – it’s just been accepted in Physical Review Letters in record time.’2 The new member of the 2D materials family is a monolayer of jacutingaite, a mineral discovered in Brazil in 2008.