Chemistry for the common good

Marcellin Berthelot was a man of many talents, combining ground breaking chemical research with a busy and successful political career, as Mike Sutton finds out

Marcellin Berthelot was a man of many talents, combining ground breaking chemical research with a busy and successful political career, as Mike Sutton finds out

In September 1870, Prussian armies surrounded Paris. France’s most experienced troops - and their emperor, Napoleon III - had already surrendered following the catastrophic defeat at Sedan. Undaunted, the Parisians armed themselves, declared France a republic, and prepared for a siege. Chemist Marcellin Berthelot played a leading part in this brief but heroic resistance, putting his explosives expertise to good use. His efforts as president of the Comit? Scientifique pour le D?fense de Paris earned him a reputation for loyalty and efficiency. 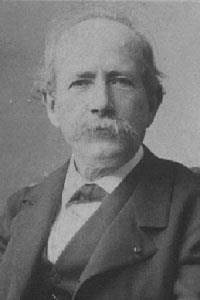 After peace returned, Berthelot was elected to the French Senate, and managed to combine his chemical researches with a busy political career which included spells as minister of education and foreign secretary. When he died in 1907 the Republic honoured his memory with a unique tribute.

Pierre Eug?ne Marcellin Berthelot was born in Paris on 25 October 1827, the son of a dutiful doctor whose patients came mostly from the city’s poorer quarters. At the Coll?ge Henri IV he began a lifelong friendship with French philosopher and writer Ernest Renan - an assistant tutor there who eventually became one of France’s most famous thinkers. Berthelot shone in philosophy, winning a nationwide prize competition in 1846. However, he opted for courses in science and medicine, completing a doctorate on the chemistry of glycerine compounds in 1854 before qualifying in pharmacy in 1858. While still a student, Berthelot worked as an unsalaried assistant in the laboratory of Th?ophile Pelouze, and then as a poorly paid demonstrator at the Coll?ge de France under Antoine Balard. When appointed a professor at the ?cole de Pharmacie in 1859 he already had a broad knowledge of practical and theoretical chemistry, which he continually extended throughout his life.

Berthelot made important contributions to organic, inorganic and physical chemistry, and did significant work in agricultural, physiological and industrial chemistry. His studies of historic texts revealed that modern chemists owed more than they realised to their ancient and oriental predecessors. He even assisted archaeologists by applying chemical analysis to problematic specimens. The distinguished chemist and historian James R Partington
(1886-1965) wrote: ’There must be few chemists of my generation, whatever their interests, who have not more than once turned up Berthelot’s publications’.

Berthelot’s first major achievement was to show how numerous organic substances could be synthesised from inorganic materials. Friedrich W?hler had prepared urea from ammonium cyanate in 1828, but before Berthelot’s work it was still widely believed that generating organic compounds required a mysterious ’vital force’ operating only within living creatures. Berthelot produced much evidence to the contrary. In 1854 he made alcohol without yeast, by dissolving ethene - obtainable from coal gas - in concentrated sulfuric acid, then adding water and distilling. (Henry Hennel had suggested this possibility in the 1820s, but his work was ridiculed, then forgotten.)

Berthelot made potassium formate in 1855 by heating carbon monoxide over potassium hydroxide. He also generated methane (and other hydrocarbons) by exposing carbon disulfide vapour to red hot copper and hydrogen sulfide (1856) or steam (1858). Many similar results were published in his influential Chimie organique fond?e sur la synth?se  (1860). The Coll?ge de France soon invited him to lecture on organic chemistry, and created a special chair for him in 1865. Meanwhile, his researches continued. Ethyne (acetylene) had been prepared by Edmund Davy in 1836, but forgotten until 1860 when Berthelot began synthesising it by various methods, coining the term acetylene. In 1862 he found the most direct route - an electric arc between carbon poles in an atmosphere of hydrogen. From acetylene, he prepared many complex organic compounds. In 1866 he converted it to benzene in a red-hot glass tube, leading to the synthesis of many other kindred substances.

Some historians question the significance of Berthelot’s syntheses. Admittedly, his methods were laborious and produced low yields. The highway to modern synthetic organic chemistry was established by other workers, who bypassed most of the routes he had pioneered. Nevertheless, his discoveries were crucial in bridging the conceptual divide between organic and inorganic chemistry.

Berthelot’s contributions to physical chemistry were equally fundamental, though once again the full fruits of his discoveries were eventually gathered by others. During the early 1860s he collaborated with L?on P?an de St-Gilles to investigate reversible reactions of the type

They established that such processes proceeded towards an equilibrium point, the position of which appeared to be unaffected by the initial quantities of the ingredients. However, they found that the rate of progress towards equilibrium did depend upon the ’active masses’ of substances present at the start of the reaction. Raising the temperature also increased the rate of reaction, without shifting the eventual equilibrium position significantly. Despite expending much effort, Berthelot was unable to derive a mathematical formula expressing these results satisfactorily.

Nevertheless, when Maximilian Guldberg and Peter Waage eventually achieved this goal with their ’law of mass action’ they acknowledged a substantial debt to his work.

Heat of the moment

From kinetics Berthelot moved on to thermochemistry. In 1865 he coined the terms endothermic and exothermic to describe chemical reactions involving absorption or emission of heat. He studied many of them in the laboratory, measuring thermal gains and losses with unprecedented precision. His 1879 Essai de m?chanique chimique fond?e sur la thermochimie  attempted to explain chemical reactions in physical terms, by applying his ’principle of maximum work’ to the heat exchanges associated with them. This stated that chemical reactions will tend to yield the maximum amount of energy in the form of work and was a precursor to the thermodynamic concept of free energy. Once again, complete success escaped him, although his discoveries made a significant contribution to the further development of chemical thermodynamics by Jacobus van’t Hoff, Willard Gibbs and Herman von Helmholtz. Berthelot also introduced an important practical innovation - his ’bomb calorimeter’, in which violent reactions could safely be studied.

Big bangs were one of Berthelot’s specialities. In 1870 his war work included supervising gunpowder production, and from 1874 he advised government committees on explosives. But he also served the Republic in peaceful ways. He worked hard at the modernisation of public education (although this sometimes involved clashes with the Catholic Church). While Foreign Secretary in 1895, he proposed the creation of an organisation resembling the League of Nations to settle international disputes and suggested to Lord Salisbury that Britain and France might one day form the nucleus of a United States of Europe.

Berthelot’s position as a public figure is demonstrated by the fact that over 50 French schools were named in his honour, while the number of streets bearing his name exceeds that for any other French scientist except Louis Pasteur, Pierre Curie and Marie Curie. Some historians claim that his celebrity status owed more to his political connections and his talent for publicity than to his scientific achievements, arguing that others who made greater contributions to chemical knowledge received less recognition. They also point out that in some areas Berthelot was actually an obstacle to scientific progress. For example, he was - like Ernst Mach and Wilhelm Ostwald - deeply sceptical about the atomic theory, preferring until the 1890s to use the older system of equivalent weights in his calculations.

Yet even if these criticisms are accepted, Berthelot’s achievements were astonishing. In addition to publishing over 1600 academic papers and 25 books, he contributed significantly to public life while still remaining a committed family man. He married Sophie Caroline Niaudet in 1861. They had four sons and two daughters, and were a devoted couple to the last. During her final illness he nursed her night and day, then died of heart failure an hour after her passing. When the Senate decreed that he should be interred in the Panth?on, a special law was passed to allow her remains to accompany his in that final resting place of so many of France’s distinguished intellectuals. No other couple had ever been thus honoured.

All Berthelot’s scientific and civic activities were underpinned by his firm ethical convictions. While still a young man, he abandoned the religious faith of his parents, adopting instead a secular humanistic philosophy. Had he patented his discoveries, he might have become rich, but he always insisted that knowledge should be pursued for the common good, not for individual profit. As a democrat and a rationalist, he believed that despite the efforts of kings and priests to retain their ancient privileges, science would eventually enlighten and liberate all humanity. In 1892, still wryly optimistic, he wrote to his sceptical friend Renan: ’I shall continue until the end to let myself be fooled by that desire for progress which you so wisely consider an illusion’.

Mike Sutton is a visiting lecturer at the Centre for Northern Studies, Northumbria University, UK