Sam Lear describes how to create the perfect scent

There is no form of artistic expression more intimately connected with chemistry than perfumery. While descriptions of fragrances invoke concepts familiar to musicians, such as notes and chords, it is of course not a spectrum of sound wave frequencies a perfumer must manipulate in their work but ensembles of volatile organic molecules. 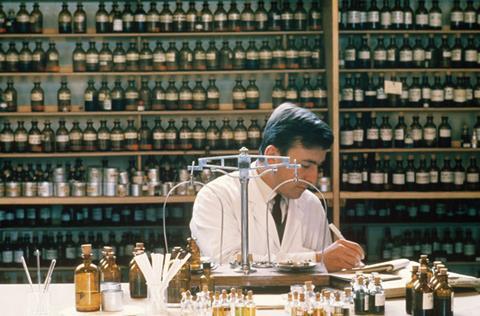 Organic synthesis has widened the palette of fragrance notes available to perfumers to paint their scents.

A perfumery accord is a blend of fragrance materials with common facets, so that the overall effect is one of a coherent, ‘consonant’ smell, in which none of the individual constituents – which may be naturally derived ingredients or synthetic aroma chemicals – are easily distinguished. In a well-designed perfume, this vertical arrangement will also evolve horizontally in time as a result of the materials’ different volatilities. The principle is illustrated by the ‘chypre’, or Cyprus, fragrance genre (for example Guerlain’s Mitsouko or Chanel’s Pour monsieur). Chypres are characterised by a bergamot top note, the most volatile and first to be perceived, whose citrus quality allows it to blend with labdanum. This green resinous component forms the heart of the fragrance, which in turn rests on an oakmoss base of a dry earthy-green character, persisting on the skin long after the other components have evaporated.

If it is the perfumer’s job to paint a scent using the fragrance notes available to them, it falls to the chemist to expand the palette of notes to use. In this respect, both organic synthesis and analysis – the structural elucidation of aroma compounds present in nature – are invaluable. Total synthesis can provide access to materials for which it would be prohibitively expensive or unsustainable to rely on natural sources for supply. Indeed, given the fact that tonnes of rose or jasmine flowers are required to produce mere kilograms of perfumery extracts, it should not be surprising that floral accords in modern perfumes often comprise reconstructions of natural floral aromas using large proportions of artificially synthesised ingredients.

It is the synthetic nature of modern perfumery, however, that makes it so exciting. Assembling smells, molecule by molecule, is far from simply being a way of providing cheaper copies of natural odours. The natural aroma of rose, for example, consists of three major components: 2-phenylethanol, geraniol and citronellol.1

Alongside these, numerous other molecules add facets to the scent, resulting in the subtle nuances that comprise a particular flower or extract’s character. Rose oxide, for example, imparts a dry green top note. A skilled perfumer with access to these synthetics can not only reconstruct the smell of a rose, but also shape its character by altering the amount of each compound present in the formula, or by adding new ones. In this way a completely unique interpretation of rose scent results from the perfumer’s artistic expression. One could compare the fluorescent, damascone-laced rose of Estée Lauder’s Knowing with post-impressionist Paul Cézanne’s use of unnatural outlines in his still lifes, which add emphasis to the form of fruits and flowers.

As with abstraction in the visual arts, perfumers may even seek to create the aroma of a non-existent abstract flower such as that found in Estée Lauder’s Beyond paradise.2 To this end, synthetic chemistry provides the potential for creating completely novel smells. Chanel’s iconic No. 5, composed in 1921, was groundbreaking due to its unusually high concentration of long-chain aliphatic aldehydes, whose aroma bears no resemblance to anything found in nature. These molecules create a distinctive, bright shimmer in the top notes of the fragrance.3

Of course perfumes are not simply static mixtures of fragrance molecules: reactions happen and can be exploited by the perfumer. Acetal formation between perfumery aldehydes and the alcohol solvent can lead to a softening of the fragrance character. Imines formed between aldehydes and nitrogen nucleophiles are particularly useful; the resulting equilibrium between the imine and its component parts results in the usually highly volatile aldehydes being released more slowly from the fragrance, prolonging the note’s lifetime and bringing it from the top of the fragrance into the heart. In Dior’s Poison, for example, the characteristics of the grape-like amine methyl anthranilate and an aldehyde are combined to produce a striking fruity-green aldehydic character.

In no other area is artistry and creativity alongside a knowledge of organic chemistry so important. Here, the responsibility for continued artistic innovation is shared by the chemists in their exploration of the scents around us and the search for new fragrance compounds. The skill of the perfumer is to arrange these molecules in much the same way that a painter applies brushstrokes to the canvas or a composer arranges the notes of a chord, and for this reason perfumery is a truly molecular art form.

Sam Lear won a runner-up prize in the 2014–15 Chemistry World science communication competition with this article. Find out more about this year’s competition

1 D Pybuys and C Sell, The chemistry of fragrances: from perfumer to consumer, Royal Society of Chemistry, 2006