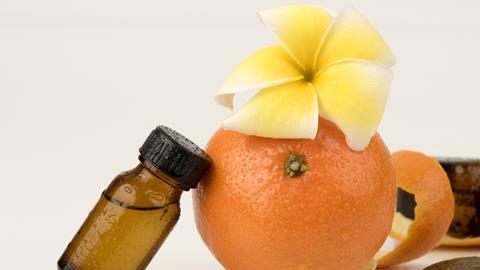 A compound known for its citrusy zing, and which also helps honey bees find their way home

This week, Brian Clegg finds out what you can really do when life gives you lemons…

The name ‘citral’ is a bit of a giveaway of the compound’s fruity origins, as is its alternative name lemonal. As we’re talking names, it’s worth distinguishing citral from citronellal and citronellol (which has its own podcast): these two compounds are found in the natural insect repellent oil of citronella.

Strictly speaking, citral is not one, but two compounds, identical in the formula C10H6O – these are known as geranial (which despite its name, smells of lemons, not geraniums) and neral. Structurally these isomers are identical, except that one bond, near the oxygen atom, is attached differently to the linking carbon atom, producing a subtly different shape.

Like geranial, neral also has a fresh, lemon smell, but it is more subtle and sweet. Because of its strong resemblance to the smell of the fruit, the oily, pale yellow liquid of citral is often used to give a citrusy zing to perfumes and a citrus flavouring to sweets and soft drinks. Perhaps surprisingly, this isn’t limited to lemon flavours. It’s also used when imitating grapefruit, orange, lime and even to give the fresh fruit tang to apple and strawberry products. Similarly, the essential oils used in producing perfumes and soap will often include citral in everything from oil of bergamot to ginger and rose. If you use laundry or dishwashing products with a lemon scent, they probably make use of citral too. 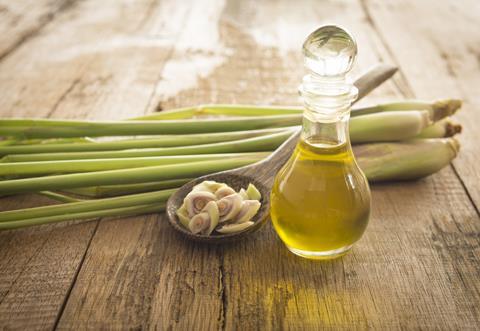 Lemongrass is one of the most common sources of citral

Where citral will be consumed, or come into contact with the skin, it tends to be used in relatively small quantities – in flavourings, for example, rarely more than 40 parts per million – not just to keep it subtle, but also because there is evidence that isolated citral can make allergy suffers more sensitive to attack.

Oddly, given that lemony zestiness, lemons aren’t the best source of citral, as lemon oil only contains a few per cent of the compound. The big hitters tend to be plants that clearly aren’t lemons but have the L word in their name to reflect their scent – lemongrass is one of the most common sources of citral, while lemon myrtle oil is close to being the pure compound.

Like citronellol, citral has an effect on some insects. It has a mild repellent action for some species, but for bees the effect is quite the opposite. Citral is a component of the Nasanov pheromone, produced by worker bees to help foragers find their way back to the hive. Citral on its own attracts foraging honey bees and can be used by beekeepers to bring them to a particular location. It also appears to act as a sex pheromone for the green-veined white butterfly, released by males to attract mates. 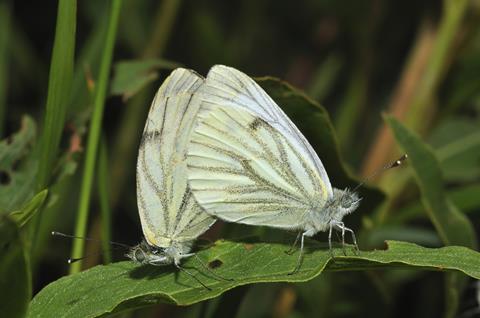 Citral also has a significant role in the production of vitamin A. The compounds collectively known as vitamin A are essential for human development, the support of a strong immune system and effective vision. Vitamin A deficiency causes up to half a million cases of childhood blindness a year and is also a significant cause of child mortality. Although sufficient vitamin A is provided by a good diet from meat – particularly liver – and some vegetables, there is considerable need for supplements both where diets are limited and for sufferers of some medical conditions.

The synthesis of vitamin A to produce supplements is a multistage process, but most have a citral product in the chain. It is reacted with acetone to produce beta-ionone, which is further processed to synthesise the vitamin compounds. Vitamin A was first produced this way in 1947 by Dutch chemists Jozef Arens and David van Dorp. Originally, the citral was sourced from lemongrass oil, which was already being used to produce perfumes, but there was not enough available to source the citral economically this way – and it was hard to get the consistency of quality required for medical use.

This shortage of naturally-sourced citral became acute during the second world war, which slowed down the early research on vitamin A synthesis. As a result, the chemical company Roche found an alternative route to beta-ionone, while competitors BASF instead produced citral from readily available butene and formaldehyde. BASF remains one of the world’s biggest producers of vitamin A.

Citral is a bit like a film star who takes on the role of United Nations special representative. It started off all show in its nineteenth century role in perfumery and flavouring, a function it still fulfils, but in the synthesis of vitamin A, the compound has shown that it can do a lot of good as well.

Brian Clegg there, freshening the podcast up with a spritz of lemon scent courtesy of citral. Next week, Kat Arney explains how a mysterious spate of farmland fatalities led to the discovery of a potent carcinogen.

The cause of this bizarre plague, which became known as ‘Turkey X disease’, was a mystery despite claiming the lives of more than 100,000 turkeys and other poultry within a few months.

Join Kat next time to find out more. Until then, find our other podcasts at chemistryworld.com/podcasts and get in touch by tweeting @chemistryworld. I’m Ben Valsler, thanks for joining me.