This year's Nobel laureate in chemistry fought hard to win acceptance of his discovery: quasicrystals. Laura Howes tells how perseverance led to the ultimate recognition

This year’s Nobel laureate in chemistry fought hard to win acceptance of his discovery: quasicrystals. Laura Howes tells how perseverance led to the ultimate recognition

On 5 October this year, the 2011 Nobel prize in chemistry was awarded to Daniel Shechtman for the discovery of quasicrystals. But while the quasicrystal community felt vindicated that Shechtman had at last been recognised, the larger scientific community rushed to their textbooks to brush up on these
non-periodic crystals. 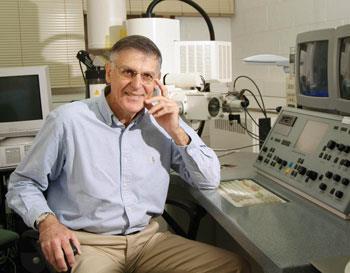 What soon captured the public imagination though was not the quasicrystals themselves, but the human story behind them. How Shechtman’s discovery required a complete rethink in the field of crystallography and how Linus Pauling resisted these findings until the day he died.

’Shechtman was not the first to observe such patterns,’ says Sven Lidin of Lund University in Sweden and member of the prize committee, ’but he was the first to acknowledge that they meant something.’ The greatness of Danny Shechtman, he adds, was his tenacity, he wouldn’t let go when everyone around him was telling him he was wrong.

That perseverance eventually paid off and led to a rewrite of crystallographic textbooks and the definition of crystals themselves. ’There are a lot of outrageous claims being made in science,’ says Lidin. It just so happens that this one was right.

I can’t believe my eyes

Shechtman has spent almost his entire career at the Technion - Israel Institute of Technology in Haifa. However, for two years in the early 1980s he took a sabbatical at the US National Bureau of Standards, now the National Institute of Standards and Technology, in Maryland, US. ’I was working on the development of new aluminium alloys for the aeronautical industry,’ explains Shechtman, speaking from his home in Israel.

In Shechtman’s lab book entry for that experiment you can read the list of exposures, part way down is the annotation ’(10 Fold???)’. Shechtman had a diffraction pattern with 10-fold symmetry. Rotating his sample he identified two, three and five-fold rotational axes in his crystal. It was icosahedral. 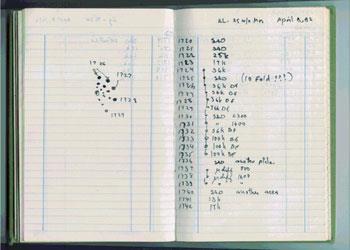 Today, that a crystal can be icosahedral is accepted, but in 1982 it was blasphemy. Everyone was taught that crystals were ordered, repeating structures of equally spaced identical unit cells that fitted together to form a lattice, like honeycomb. Pentagons (five-fold symmetry) can’t fit together in an ordered way, according to the textbooks the only symmetry you could have was two, three, four and six-fold.

Repeating units of four and six-fold symmetry leads to periodicity, but doing the same with five-fold symmetric units (centre) does not

Of course there was a way that ’forbidden’ reflections could show up - twinning, two crystals overlapping - but Shechtman had accounted for that, he was sure he was only looking at a single grain. Next he had to publish his results, and that proved the first difficulty.

’There was a period of about two years when I tried to convince people that this was something new, but nobody agreed with me,’ says Shechtman. ’It was a rejection of my science.’ Colleagues told Shechtman to go away and read a textbook. Eventually he was even asked to leave his research group. Shechtman recalls that one journal rejected his first manuscript describing his findings as ’not being of interest’. That paper got accepted elsewhere, but was held up in publication. Eventually, in late 1984, Physical Review Letters  accepted and published the discovery.1 ’After it was published all hell broke loose!’

In a brilliant example of timing, a preprint of Shechtman’s manuscript found its way to Paul Steinhardt, now at Princeton University, US. After seeing icosahedral bond order in glasses (a disordered system), Steinhardt had wondered if there could be a way of having icosahedral symmetry in a more ordered system. He had been working on this idea since 1981.

After he worked out that Penrose tilings aren’t just quasiperiodic - but have perfect five-fold symmetry - Steinhardt realised quasiperiodicity could be used to make a structure with icosahedral symmetry. A quasicrystal is made up of two units, fitted together in a non-repeating pattern, like a three dimensional version of Penrose tiling. Because each of the component units have Bragg peak diffraction, ’you can have something with Bragg peak diffraction like a crystal but which itself is not a crystal’, Steinhardt explains. ’By 1984 we were computing diffraction patterns to tell people how to look for it.’

When a collaborator visited, Steinhardt was excited to show off these new diffraction patterns, but his friend had his own surprise. Steinhardt recalls that they jockeyed for who got to go first and in the end his friend won. ’He showed me this paper, I flicked through it and I saw this diffraction pattern. I leapt out of my chair, went over to my desk and pulled out the diffraction pattern that we’d computed and said "look at this!" It was instantaneous recognition.’

Steinhardt immediately published his findings, and suggested that this might be an explanation for Shechtman’s discovery. The paper came out just before Christmas 1984: now there was a mathematical backing to and a term for the very thing Shechtman had discovered - quasicrystals.2

’We should be a little bit generous to the ones who told Shechtman he was wrong because there were so many good reasons why he was wrong,’ says Lidin. ’You really had to look at the details of this experiment to see that he had really turned every stone and wasn’t barking up the wrong tree.’ 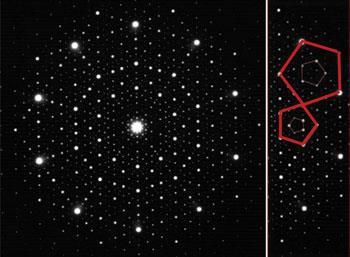 ’In 1987 a colleague of mine was able to grow large enough single crystals [of the same aluminium alloy], enough to get x-ray diffraction,’ and the x-ray results confirmed Shechtman’s original observations. Later that year, at a conference of the International Union of Crystallographers (IUCr) in Perth, Australia, Shechtman presented his results ’and they believed me’. Slowly but surely Shechtman’s discovery was accepted and the IUCr even changed its definition of a crystal to be ’any solid having an essentially discrete diffraction diagram’. One very famous man, however, disagreed with Shechtman until his dying day - Linus Pauling.

’At first I was alone against the world,’ recalls Shechtman, ’in the end Linus Pauling was alone against the world.’ Pauling was convinced that Shechtman’s results could be explained by twinning or huge unit cells containing around 1120 atoms each.3 ’He was wrong of course,’ chuckles Shechtman. But Shechtman doesn’t resent Pauling: ’he was one of the greatest scientists of the 20th century.’

Shechtman even travelled to Pauling’s lab in the US, to give Pauling a one hour lecture on his work: ’he was sitting there listening and at the end he said "Danny I don’t know how you do that". Which means he did not understand electron microscopy, he did not get it. Now, if it was another person I would just tell them to go read the book, but Professor Pauling wrote the book.’ Shechtman and Pauling continued to correspond by letter until Pauling’s death in 1994, but Pauling never accepted the existence of quasicrystals.

One of the overwhelming messages from the people who work in the field is that even though they were identified nearly 30 years ago, quasicrystals are still not very well understood.

It is even still up for discussion whether quasicrystals occur in nature or can only be synthesised in the lab. This is a puzzle Steinhardt has been trying to crack for approximately 12 years. ’About eight years into the search we found this rock that had a quasicrystal grain in it,’ says Steinhardt (see Chemistry World, July 2009, p4). But that wasn’t the end of the story. ’We got a tremendous amount of blowback from the geology community, whether or not this material really was real.’ The last three years have been spent trying to prove that the rock is natural, and Steinhardt now thinks it originates from a meteorite. When he spoke to Chemistry World  he was just back from a trip to where the first rock sample came from in Russia. ’We found more [rock],’ he adds. ’So now we can do a lot more studies and nail even more accurately the age of the quasicrystal.’ 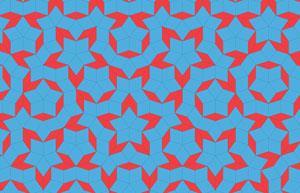 Quasicrystals have some peculiar properties, from poor conductivity to non-stick surfaces, and the quasicrystal community has grown in a multitude of different directions since their discovery in 1982. Hans-Rainer Trebin of the University of Stuttgart, Germany, was one of the researchers who accepted Shechtman’s findings early on. ’In 1985 I came to Stuttgart and immediately started working on quasicrystals.’ Trebin built up a research group and hasn’t stopped studying the theory behind quasicrystals since. His group models quasicrystal structures - to improve our understanding of how they are made, and also how the structure relates to their physical properties.

Ronan McGrath of the University of Liverpool, UK, meanwhile is studying the surfaces of quasicrystals. ’The goal here is to see how these materials interact with other species at the nanoscale, and in doing so we learn more about the material and the growth properties of the materials.’ In particular to try and tease out whether it’s the structure or the chemical complexity that leads to the physical properties of the quasicrystal.

Another area of high interest is soft matter systems - micelles or star polymers. ’Many of these systems have been shown in the last five years or so to have phases that are quasiperiodic,’ explains Ron Lifshitz of Tel Aviv University, Israel. ’It’s quite evident even at this point that the formation of these soft quasicrystals is different to the formation of transition metal quasicrystals.’ They are also, says Lifshitz, easier to treat theoretically and so there’s already been a lot more success in understanding how and why soft quasicrystals form.

As for Shechtman, he remains an important part of the large field that his work spawned. His team is mostly focused on the icosahedral phase, using microscopy to study the structure and behaviour of
the lattice.

’There’s a lot more to do and understand, and by understanding that we’ll be able to control the synthesis of quasicrystals better,’ concludes Steinhardt. ’That’s when I think you’ll see the chance for applications, when you can make really highly perfect quasicrystals with just the material properties you want it to have.’

The Nobel prize in chemistry is often awarded to things of a practical nature, says Lidin. ’I think it’s important to have the courage and the will to award for things that are not primarily useful, but that actually teach us about the world in which we live.’ And Shechtman’s discovery certainly did that.

’There’s no question he deserved the prize on his own,’ says McGrath. ’His name has been talked about for many years and we thought his chance had gone.’

And Shechtman says he would have been fine with that. ’I would have lived and died in peace,’ he says. ’But this is the ultimate recognition.’