Tetrahedral nanoparticles can self-assemble into quasicrystals, researchers have been surprised to discover. The mesmerising structures are the first quasicrystals containing just one component – although their existence was predicted in computational simulations almost a decade ago.

Unlike in traditional crystals, the ordered patterns in quasicrystals don’t repeat regularly in all directions. When Dan Shechtman discovered quasicrystals in the early 1980s, the idea of such non-periodic crystals was so outrageous that many scientists flat-out denied their existence – chemistry giant Linus Pauling even called Shechtman a ‘quasi-scientist’. It took Shechtman – who later received the Nobel prize for his work – several years to convince the scientific community that they were real.

Today, quasicrystals have become part of science’s vocabulary. Most are metal alloys, such as aluminium–copper–iron icosahedrite, and all have at least two ingredients. But in 2009, computer simulations indicated that single-component quasicrystals might exist too. 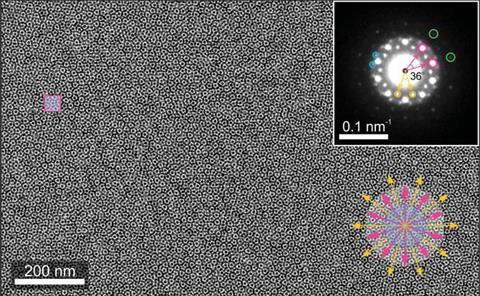 Ou Chen from Brown University, US, and his team have now created the first such one-component quasicrystal from tetrahedral nanoparticles. The particles are made of wurtzite (zinc iron sulfide) covered with oleic acid on three sides and with octadecylphosphonic acid on the remaining side.

Floating on top of ethylene glycol, the nanoparticles self-organise into a superlattice with decagons, 10-sided polygons, as the primary structural unit. Such 10-fold rotational symmetry is only possible in quasicrystals.

What makes the quasicrystalline lattice possible are the nanoparticles’ soft edges. It allows them to also make smaller polygons with five to nine sides, which fill the spaces between the decagons. This flexible polygon tiling rule, the researchers write, could help others create one-ingredient quasicrystals.