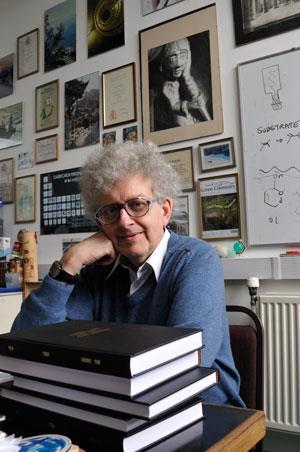 Martyn Poliakoff, foreign secretary of the Royal Society, YouTube superstar, professor of chemistry at the University of Nottingham in the UK and honorary professor of chemistry at the Moscow State University in Russia, has a dazzling array of strings to his bow. But he doesn’t hesitate when asked how he would describe himself. ‘I’m a chemist,’ he says. ‘A researcher first, and then a teacher’.

Poliakoff is famous for so many things, it’s tricky to know where to start. Some, he can’t really do anything about – his Russian ancestry, his renowned playwright brother, his properly mad-professor hair – but for others, for the important stuff, he must take full credit. As a research chemist at Nottingham, he has pushed the boundaries of green chemistry, focusing on the development of environmentally acceptable chemical processes and materials.

Born in London in 1947, Poliakoff was the first son of an English mother and a Russian father. His father, Alexander Poliakoff, a physicist who became chairman of Multitone Electronics, had left Russia with his parents in the 1920s. The Poliakoffs had lived in the heart of Moscow, with Alexander’s nursery window overlooking the Kremlin. After the October 1917 coup, their flat, their car and his father’s company were confiscated by Lenin’s government. The family came to London in 1924 when Alexander was 14.

Despite the ‘failure’ of these two brothers, both have become leaders in their fields. Both have been appointed Commander of the Order of the British Empire – Martyn for services to science and Stephen, to drama. In 2008, the brothers were both awarded honorary doctorates by the University of East Anglia – Stephen for letters and Martyn for science. ‘A great excuse for a big family party,’ Martyn said at the time.

To have turned out two such exceptional individuals suggests their parents were very encouraging. ‘Our parents were supportive,’ agrees Martyn, ‘but in some rather unconventional ways.’

He particularly regrets his mother’s belief that it was harmful to bring up children as bilingual. It didn’t stop him learning Russian, but it delayed the process, only learning with his Russian grandmother when he was 14. The language comes in useful now: he has collaborated with Russian research groups since 1990, had several Russian co-workers and supervised three PhD students in Russian. As well as sharing the title of honorary professor at Moscow State University with Fidel Castro and Bill Clinton, he is a foreign member of the Russian Academy of Sciences.

Poliakoff is admirably placed for the role. Not only with his Russian connections, but also through a collaboration with Chinese green chemist Buxing Han going back over 15 years (since 1998), and as an honorary member of the Chemical Society of Ethiopia – a role he took on in 2008, three years before being made foreign secretary.

Continuing the theme, Poliakoff has clearly been touched by two collaborations on a slightly different scale. In 2012, a young YouTube fan of his from Italy, Edoardo, came over to the University of Nottingham with his mother to celebrate his 10th birthday. He was shown around the labs and attended a demonstration lecture aimed at A-level students. His obvious enjoyment made it a particularly rewarding experience, says Poliakoff, and reminded him of the value of the YouTube project.

In 2011, Poliakoff was awarded the Nyholm Prize by the RSC for taking chemistry to the widest possible audience. In response, he made a video about Australian inorganic chemist Ronald Nyholm after whom the award is named. Many inorganic chemists are aware of Nyholm’s work with Ron Gillespie in developing the valence shell electron pair repulsion approach to molecular structure, previously called the Gillespie–Nyholm theory. Poliakoff explained, with the help of a selection of dog toys shaped like molecules and customised deely boppers, how Nyolm’s work helped make inorganic chemistry what it is today.

‘As a result of the YouTube video, I got an email from Nyholm’s son living in Texas,’ recalls Poliakoff, ‘I didn’t even know he had children.’ In recognition of the prize, Poliakoff gave a lecture which, to his delight, was attended by Nyholm’s daughter and granddaughter. ‘It was a very moving occasion,’ says Poliakoff, ‘It’s the closest I’ve ever come to bursting into tears while giving a lecture.’

Bea Perks is a science writer based in Cambridge, UK