A new strategy for analysing fatty acids could one day play a role in determining whether or not life exists on other worlds.

It’s an exciting time in our search for life beyond Earth. New exoplanets are discovered almost daily by the Kepler space observatory. The Cassini mission to Saturn and the Mars Exploration Rovers have transformed our understanding of the solar system. Finding at least simple microscopic life seems only a matter of time and clues to recognise extraterrestrial microorganisms may come by identifying fatty acids from their cell membranes.

Peter Willis and a team of researchers at NASA’s Jet Propulsion Laboratory (JPL) in California, US, have developed a microchip analyser that distinguishes a broad range of fatty acids by the length of their carbon chains. Willis says that this is an important advance because ‘different microorganisms have cell membranes with different carbon chain length signatures.’ Algal fatty acids, for example, tend to be around the C20/C22 mark whereas bacterial fatty acids are typically C16/C18 in length. ‘So by measuring these molecules in an unknown sample we can gain information about what organisms were present, even if the sample is very old and the organisms are no longer alive.’

The work builds on a method for labelling long-chain amines, known as nonaqueous microchip capillary electrophoresis with laser induced fluorescence (µNACE-LIF), by using a new dye, Pacific Blue hydrazine, which was synthesised by Invitrogen specifically for this study.

Willis says that other methods exist for analysing fatty acids, but not over the range of carbon chain lengths that they were interested in. ‘In water solutions, we can’t dissolve anything having a carbon chain longer than about 12 carbons, because the molecules are too hydrophobic. But our technique is nonaqueous so we can measure over the entire range.’

Michael Breadmore, an electroseparation expert at the University of Tasmania, Australia, notes that this is the first method to separate up to C30 fatty acids on a microchip. He adds ‘the key to this being useful lies in the simplicity of preparing the sample. Full implementation in the field will allow exciting new ways to study microbes, particularly in extreme conditions.’ 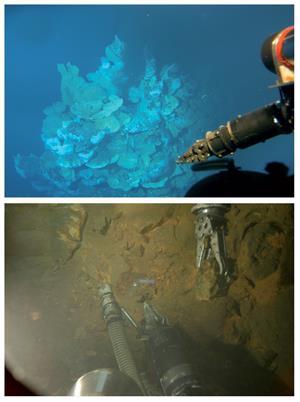 For this particular study Willis says he was inspired by the great icy moons of Enceladus and Europa, worlds that may hide vast oceans of liquid water. He explains that someday we’ll search for the signs of life in these underwater worlds and we will need new analytical methods to do so.

To this end, Willis teamed up with colleague Kevin Hand, a leading planetary scientist, who provided samples from a deep-sea mission to the Snake Pit hydrothermal system in the Atlantic as practice for Europa. Morgan Cable, a postdoctoral fellow in the NASA JPL team analysed the samples and found C12, C18, C20 and C22 fatty acids, which they attributed to gram-negative bacteria (C12 and C18) and phototrophic microplankton (C20 and C22).

Erik Jensen, director of R&D at HJ Science & Technology, US, says ‘the real benefit of this technology is its portability: ‘As it is readily automatable in a miniaturised format, it could provide a powerful tool for the search for life beyond our planet.’

Ultimately, the team at the JPL aim to improve their system to tell different saturated acids apart and directly measure biological molecules in the field for the next generation of robotic rovers hunting out alien life in our own backyard and beyond.