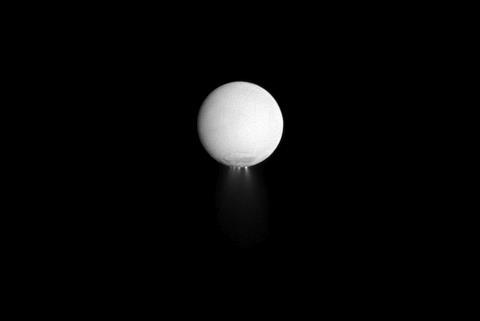 An unexpectedly large quantity of methanol has been detected around one of Saturn’s moons, Enceladus.

Researchers from the UK were able to use the IRAM 30m radio telescope in the Spanish Sierra Nevada in order to detect a methanol signature around Enceladus. This is the first time that researchers have detected a molecule from Enceladus using a ground-based telescope and the work was presented at the National Astronomy Meeting 2017 in Hull.

It is well known that Saturn’s moon Enceladus is tectonically active. Icy geysers near the south pole of the body regularly eject jets of water vapour, molecular hydrogen and other volatiles into space, replenishing the material of Saturn’s E ring. However, it has previously not been possible to analyse these jets from Earth.

The measurements indicate that the amount of methanol surrounding Enceladus is similar to the amount of methanol found in the Earth’s oceans. This volume is ‘unexpectedly large’, indicating that the materials ejected from its centre undergo complex chemical reactions once expelled. It is thought that this large quantity of methanol may have been formed when a cloud of gas expelled from Enceladus became trapped in Saturn’s magnetic field, or alternatively that the gas spread further into Saturn’s E ring and underwent reactions there.