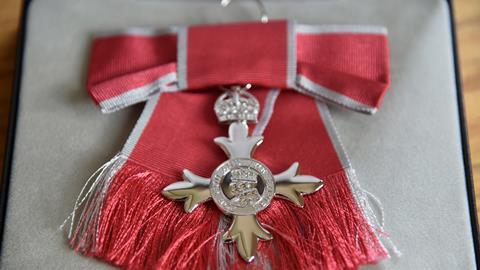 Chemists and others working in the chemical sector and related scientific fields are among those to have been recognised in the UK’s 2023 new year honours list.

OBEs were also awarded to University of Glasgow biochemist Graeme Milligan for services to biomedical research and to industry, and Met Office science fellow Richard Jones, who worked on the last four IPCC assessment reports, for services to climate science.

Zoë Bowden, who retired last year after having held numerous leadership roles at the ISIS neutron and muon source in Oxfordshire, is another OBE recipient for services to science.

Anita Frew, who chairs the boards of Rolls-Royce and speciality chemical manufacturer Croda, is appointed DBE.

Honours have also been awarded for people who have supported science in government, as well as in national academies and professional bodies.

CBEs for public service were awarded to Andrew Curran, who serves as the chief scientist for the government’s health and safety executive, and Paul Taylor, who was previously chief executive at the Defence Science and Technology Laboratory and served as a science adviser to the Ministry of Defence.

Law scholar and former barrister Julie Maxton receives a CBE for services to science and to the law. Maxton is executive director of the Royal Society – the first woman appointed to the role in the society’s 350 year history. Meanwhile, Charles Tracy who had served as head of education at the Institute of Physics receives an OBE.