2D materials made in MOF factory

Industrialised synthesis of 2D materials is a step closer to reality, new research shows. In a recent study, scientists in China have used a metal-organic framework (MOF) based system to easily produce poly-phosphorus nanosheets. 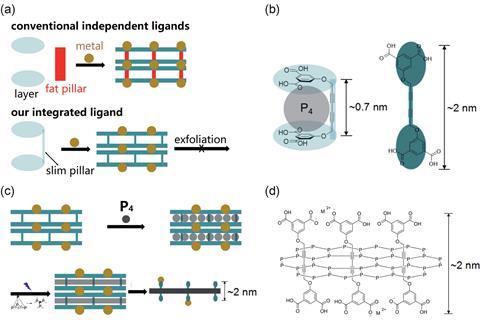 (a) Pillar–layer MOF constructed from independent ligands and an integrated ligand made by Li (because such a MOF has a 3D framework, the MOF itself has no chance to be exfoliated to 2D sheets); (b) the structure of Li’s ligand; (c) preparation of the 2D phosphorus material within the 2D nanoreactor; (d) the proposed structure of the 2D phosphorus material

2D materials are at the forefront of materials chemistry, inciting research ever since graphene was first isolated. An important aspect of this research has been to develop easy and economical production methods.

‘Since the gate to the 2D world opened, thousands of scientists have been involved in this field, but unfortunately real industrialisation is still extremely rare. Developing air and moisture stable 2D materials with economic productivity and a simple approach is necessary,’ comments Li.

‘MOFs could be very useful templates to assemble nanoscale materials within their pores. They exhibit a large variety of pore space architectures and can be rather easily assembled and dissolved as required,’ describes Sankar Nair, a nanomaterials expert at the Georgia Institute of Technology, US.

Li describes the work as an industrial process: ‘Our method is similar to casting iron sheets in a mould. The 2D nanoreactor is a mould with 2D cavities; white phosphorus intrudes into these cavities and then polymerises. After dissembling the 2D nanoreactor, free 2D phosphorus sheets are obtained.’ 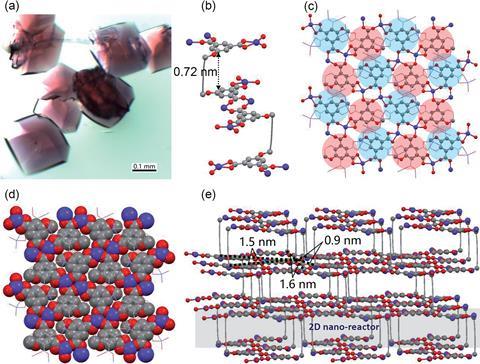 However, Marco Ranocchiari, a researcher at the Paul Scherrer Institute, Switzerland, studying catalysis and MOF chemistry, believes the real advantages of this method are its flexibility and design prospects. ‘The clever design of the organic linker and construction of the nanoreactor is really on a fundamental level but if one finds a more flexible approach to tuning the dimensions of the template, then one can look at specific applications.’

‘By tuning the size or composition of the organic linker of the reactor, one can start tuning the thickness of the nanosheet. Designing the nanoreactor in certain ways will give a certain amount of flexibility – this is really the most important aspect,’ concludes Ranocchiari.