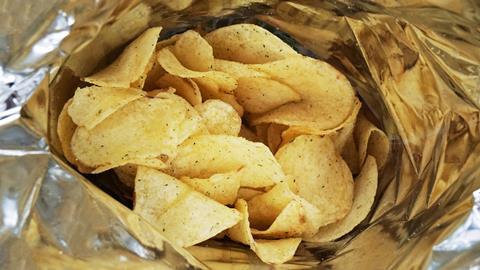 Inorganic nanosheets could be a recyclable, flexible alternative to the metal coatings found on plastic food packaging such as crisp packets and fruit juice cartons. Previous attempts to synthesise these nanosheets have required extreme reaction conditions giving them an outsize carbon footprint. A new, environmentally friendly synthesis has now been developed that could make them viable alternatives to metal coatings.

A lot of food packaging relies on metallised films. These films are made up of several layers of plastic and metal that have been fused together, and they are very effective at preserving and protecting food. However, their production has a large carbon footprint, and the materials cannot be recycled without separating the layers. With concerns rising about mountains of hard to recycle plastic packaging waste, the hunt is on for alternatives that are more environmentally friendly, but still cheap and good at keeping food fresh.

One possible alternative is to remove the metal layers in the film and instead coat the plastic layers with 2D sheets of synthetic clays known as layered double hydroxides (LDH). These 2D nanosheets are transparent, robust materials that are largely impermeable to contaminants, making them ideal for keeping food fresh. They have already been shown to be safe for food – in 2006, the EU approved the use of magnesium–aluminium LDHs for food contact uses. Unfortunately, previous LDH syntheses have been incredibly demanding, either requiring harsh conditions for top-down approaches, or resulting in low yields and large amounts of solvent waste from bottom-up approaches.

To overcome these challenges, the team investigated alternatives to conventional LDH syntheses that were less wasteful and safer to carry out. This involved experimenting with amino acids, which are thought to act as intercalants in the presence of LDHs, disrupting the strong electrostatic forces between the material’s layers, allowing exfoliation of 2D nanosheets. The researchers found that amino acids enabled them to create very high dielectric aqueous solutions, which were capable of exfoliating the LDHs while maintaining relatively gentle reaction conditions. This allowed them to create plastic films coated with LDH nanosheets that were both robust and flexible.

‘Our low energy alternative barrier coating for food packaging eliminates the metallic layer from the polymer packaging film – so not only is it much easier to recycle, completely non-toxic and mechanically stronger than metallised film, it is transparent and has a lower carbon footprint,’ says lead researcher Dermot O’Hare from the University of Oxford. ‘It is even microwavable. Transparency is also a distinct advantage when you want to show off the product inside your food packaging, and attract unsuspecting and hungry shoppers on their way to check-out.’

The team tested the new coated plastic packaging and found that it performed very well, almost completely stopping the penetration of water and oxygen. The oxygen transmission results were particularly impressive, as the material had an oxygen permeability at least 50 times lower than commercial metallised films.

Yi Liu from the Dalian University of Technology, who has studied LDH-modified membranes in the past, tells Chemistry World that the film shows great promise for replacing metallised films thanks to its excellent protective properties. ‘Future research should be conducted on further optimising the manufacturing process and constructing high-performance LDH nanosheet-based 2D molecular sieve membranes.’