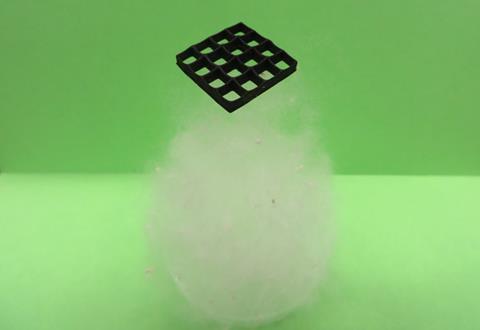 A new 3D printing technique has made it possible to fabricate graphene aerogels with complex microstructures. The researchers behind the new ultra-light structures hope that the technique will open up new uses for this class of material.

Aerogels are low density materials with a sponge-like structure that have a number of useful applications such as thermal and optical insulators. Researchers are particularly interested in graphene aerogels as they possess additional properties such as high compressibility and conductivity and have been touted as potential shock dampers, solid state batteries and catalysts.

One promising method for creating graphene aerogels with intricate architectures for these applications is 3D printing. But this is far from straightforward. ‘In order to print you need to change the viscosity of graphene so it’s really high,’ says Dong Lin of Kansas State University, US. Researchers tend to mix graphene with polymers or silica before using inkjet printers to extrude the graphene mixture at high or room temperatures. The polymer or silica is then removed by burning or with chemical processes, but this can damage the aerogel’s structure. In addition the nature of the technique, which prints layers on top of each other, makes it hard to produce complex structures, such as overhangs. 3D printing aerogels can also lead to a material with poorer physical properties due to its layered structure.

Lin and his colleagues’ technique allowed them to overcome these problems. They mixed graphene oxide with water and printed it out on a surface at -25°C. Each layer froze on printing, enabling them to build up a graphene oxide structure supported by ice. However they found that when depositing the graphene oxide suspension onto the frozen structure, the unfrozen material melted the already frozen surface. This allowed the layers to mix freely and refreeze, forming hydrogen bonds and improving the aerogel’s structural integrity. By using a second printer nozzle filled with pure water they could also create complex structures, as the water formed an ice support, upon which they could layer the graphene oxide suspension.

The resulting aerogel was finished by freeze-drying it in liquid nitrogen to expel the water, before thermally reducing it to graphene. With their technique the researchers were able to create aerogels with densities ranging from 0.5 to 10mg/cm3, which also had good electrical conductivity and high compressibility.

‘It’s certainly an interesting technique’ says Andrea Ferrari, director of the graphene centre at the University of Cambridge, UK. ‘Additive manufacturing is quite widespread for prototyping and it is good to have graphene available to do this type of work.’

The researchers now hope to build upon their technique by investigating whether their multi-nozzle method could create aerogel structures formed of multiple materials.