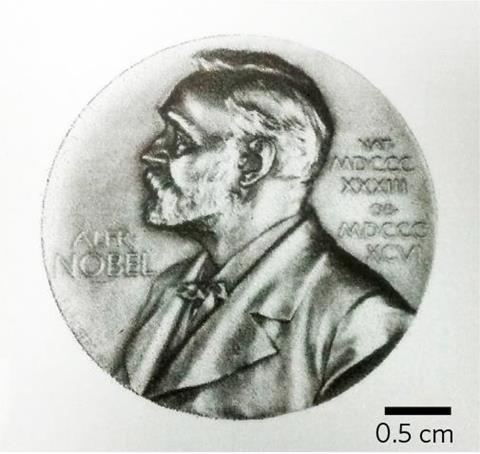 The team’s water-based graphene ink formulation is able to print high definition structures – unlike many other 2D material inks. Here they demonstrate its potential by printing out a picture of a Nobel prize medal

Water-based, non-toxic inks made from flakes of materials such as graphene and tungsten disulfide have been produced by University of Manchester researchers. They demonstrated the inks’ promise by producing two electronic components using inkjet-printed heterostructures. The inks appear to be non-toxic – something that is crucial for biomedical applications.

The electronics industry’s traditional materials – crystalline silicon, for example – have been enormously successful in computers and phones. However, physical limitations like inflexibility and lack of transparency hinder their applications in smart packaging, wearable and implantable medical devices, and flexible displays. Van der Waals heterostructures provide a promising solution, but producing them industrially is difficult. ‘Typically, they are produced using the very first technique used to isolate graphene, which is Scotch tape,’ explains Cinzia Casiraghi of the University of Manchester, UK.

Inkjet printing is seemingly ideal, but it requires stable inks with suitable properties. Previous inks have been unsuitable for heterostructures though, as they tended to mix when printed in layers. They also often required toxic solvents – implantation of a device containing the most popular solvent, N-methyl-2-pyrrolidone into the human body ‘would certainly be forbidden’, says Andrea Ferrari of the University of Cambridge, UK, who was not involved in this research. 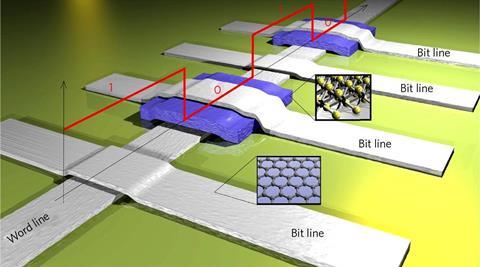 Casiraghi and colleagues used pyrene-stabilised, concentrated aqueous suspensions of layered crystals such as graphene, semiconductors, such as molybdenum disulfide and tungsten disulfide, and insulators such as hexagonal boron nitride. To make the suspensions suitable for inkjet printing, the researchers added propylene glycol to increase viscosity and the surfactant triton x-100 to reduce surface tension. Finally, they added the binder xanthan gum to prevent different printed layers mixing.

Armed with the resulting inks, the researchers produced reportedly the first working, fully inkjet-printed heterostructures: a photodetector comprising tungsten disulfide sandwiched between two layers of graphene and – alongside Gianluca Fiori of the University of Pisa in Italy – a read-only memory. In vitro biocompatibility studies on various human cells showed no evidence of cytotoxicity. Xanthan gum and propylene glycol are approved food additives and triton x-100 is used to stabilise vaccines. The cells did, however, bind to the crystals and sometimes internalised them – something the researchers acknowledge needs further investigation.

Ferrari says the most significant advance here is the biocompatibility. ‘It may well be that there’s no other fully-published paper on this out, but I’ve seen many people reporting printed heterostructures at conferences, including ourselves,’ he says. ‘I am pretty sure this is the first paper where a water-based heterostructure has been shown to be biocompatible.’ He adds that ‘the programmable logic device is, for sure, a new one’, although he cautions that ‘a four-bit memory encoding 1010 is orders of magnitude away from anything that could be considered useful’.