A group of US-based chemists have transformed scientific charts and images into tactile materials that are accessible to blind and visually impaired researchers. This could help to reduce barriers faced by people with low vision who wish to study and work in science.

Shaw explains that the project began as an outreach project with deeply personal roots. ‘I got into this work because my son was born with tumours in both of his eyes. He can see fairly well still, despite losing an eye and having tumours in his other eye, but some of his friends can’t,’ says Shaw. ‘That got me thinking: how can we show all of this cool, stunning imagery of science to these kids?’

Shaw bought a basic 3D printer for $3500 and began converting pictures into tactile graphics. He and his students found a way to make the sheets as thin as possible to use less material and speed up production. ‘When you held them up to the light, they lit up just like the picture on the computer screen – they looked picture perfect,’ says Shaw. ‘This got us to thinking that we can use these as a universal visualisation tool so that blind and sighted people can sit around and share the exact same piece of data.’

The researchers used their method to 3D print UV­–vis and mass spectra, gel electropherograms of proteins, textbook illustrations and micrographs of a butterfly chitin scale. They then compared how well groups of blind, blindfolded and sighted students and researchers were able to interpret the data. The blind chemists scored at least as well as their sighted counterparts in the vast majority of the questions.

‘Tactile graphics are not really new – we’ve had thermoform graphics, where you heat the ink and it rises, or braille tactile graphics for years and years,’ explains Matthew Guberman-Pfeffer, a chemist at Yale University, who has been functionally blind since birth. ‘But the problem with those graphics is they have to be typically made by a specialist who has a long period of training; the specialist has to be sighted; and they typically come in bulky Braille books that cost tens or hundreds of thousands of dollars. You’re really lucky as a blind person if you can get your hands on those.’

‘When Bryan showed me these tactile graphics, what immediately struck me was how readily these tactile graphics can be made. In principle, if the software’s accessible, a blind person could do it himself or herself,’ adds Guberman-Pfeffer. ‘Being able to 3D print diagrams from articles – which are completely inaccessible today – and being able to really access data and share it with colleagues and discuss over the same image that they see and I see at the same time, that’s a tremendous possibility.’

Mona Minkara, a computational scientist based at Northeastern University in Boston who developed blindness during childhood, also believes that the lithophanes have great potential for helping blind and sighted people share scientific ideas.‘As a blind professor myself, I think this is a really cool piece of technology,’ she says. ‘I can use this to communicate with all my students – this one medium will make data accessible to both me and sighted students.’

For Hoby Wedler, a chemist and entrepreneur who was born blind, the lithophanes offer a means to address an unfair paradox where chemistry – a subject focused on things no one can see – has become exclusionary to visually impaired people. ‘Chemistry is not a visual science. As much as people try to tell us, nobody can see atoms. Chemistry is a cerebral science,’ he says. ‘The hardest part of studying chemistry for me, especially in the academic setting, is getting visual material from the literature or from textbooks or even PowerPoint presentations, into my mind – doing the chemistry is the easy part. The other hard part is getting my data back out into the into the world.’

‘Whether we like it or not, chemistry has only become a visual science based on the ways in which we like to present our data – because we do rely on visuals and figures quite heavily to do that,’ says Wedler. ‘But having a technology that can easily and cheaply and quickly create tactile figures, where I, as a blind chemist, have the same advantages and disadvantages when feeling them to sighted chemists – this literally protracts and brings to life the idea that data can be made available for everyone.’

‘I think it will hugely enhance inclusivity in Stem areas,’ comments Jane Essex, an expert on inclusive science education based at the University of Strathclyde, UK, who was not involved in the project. ‘Although the most obvious beneficiaries are those with a visual impairment, I believe this has far wider implications.’ 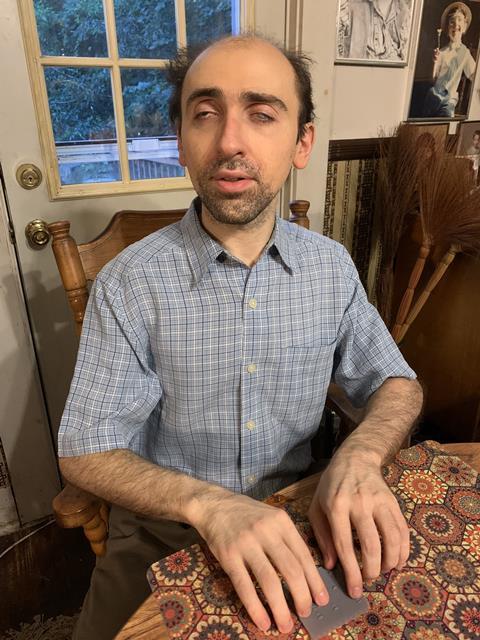 Essex explains that using multiple senses to learn about something often creates a more complete understanding, and points out that the blind paleoecologist Geerat Vermeij has described how feeling biological remains – rather than seeing them – offered him a different perspective on their structure. She believes that the new technology could pave the way for ‘many more people’ to engage with Stem subjects. ‘Above all, it sends a powerful signal that there are multiple ways to understand the physical world, and that is a message that we need to be reminded of often,’ she adds.

Shaw hopes that the technology can be improved to make it easier for blind researchers to print the lithophanes themselves, directly from journal articles. ‘I would like to see it automated,’ he says. ‘It would be great if we could team up with some computer scientists, and we could click on an image in a paper and have it come out in the 3D printer, just like it does in a normal printer.’

With 3D printing now affordable for many chemistry departments and high schools, Guberman-Pfeffer believes that widespread use of the technology will also encourage more visually impaired and blind young people to pursue chemistry careers. ‘When I started out in chemistry, I was actually strongly discouraged from doing so precisely because the instructor felt that there was no way I could understand the images he drew on the board,’ he says. ‘Now, one thing that the lithophanes allow an instructor to do is to sketch out their lecture and then 3D print it – problem solved.’