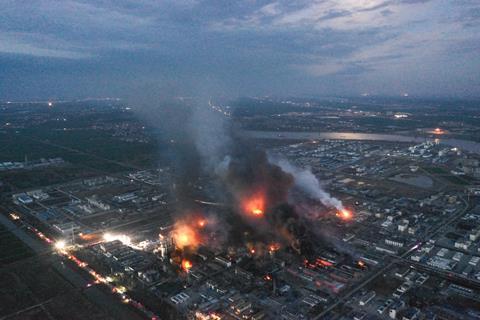 Blast in industrial park in Yancheng

An enormous explosion at an east China chemical plant has killed 47 people, seriously injured 90 and put another 640 in the hospital. The blast flattened the plant and 16 neighbouring factories, leaving an enormous crater. It set off a tremor equivalent to a 2.2 magnitude earthquake, smashing windows and collapsing roofs up to 3km away.

The blast occurred on Thursday afternoon at Jiangsu Tianjiayi Chemical Company in an industrial park on the outskirts of Yancheng, a city 300km north of Shanghai. More than 900 firefighters spent all night battling fires that had engulfed chemicals storage tanks and had spread to five neighbouring factories. 4000 workers and residents were evacuated from the area.

What caused the explosion has not been confirmed. According to site workers cited by business news outlet Caixin, a lorry carrying natural gas had caught fire, creating an explosion in a benzene storage tank.

According to its website, Tianjiayi is a fine chemical company that specialises in producing m- and p-phenylenediamine. Both compounds are precursors for polymers, resins and dyes. m-Phenylenediamine is prepared from benzene by dinitration and hydrogenation. The para isomer is made from p-nitrochlorobenzene, which is treated with ammonia and then hydrogenated. 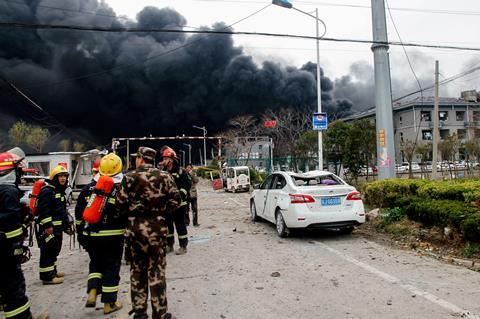 Firemen and Chinese paramilitary police officers search at an explosion site in Yancheng in China’s eastern Jiangsu province on March 21, 2019

China’s president Xi Jinping, who is currently in Italy on a state visit, said no efforts should be spared to rescue people and care for the injured. He also called for stricter inspection procedures to prevent similar accidents in the future. According to the New York Times, an undisclosed number of Tianjiayi Chemical Company officials were detained after the explosion.

In 2015, another enormous blast at a chemical storage warehouse in Tianjin killed 165 people and injured 700. The accident had prompted an overhaul of the country’s chemicals safety regulations. 48 staff and government officials deemed responsible for the explosion received suspended death sentences.