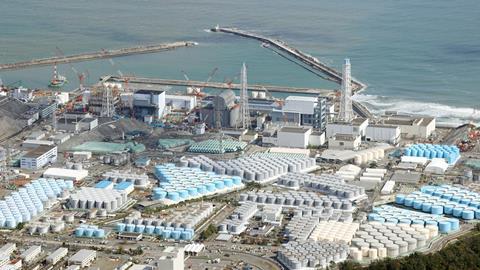 On 11 March 2011 a massive earthquake struck just off the eastern coast of Japan. The subsequent tsunami devastated the eastern seaboard of Japan’s Tōhoku region and led to disaster at the Fukushima Daiichi Nuclear Power Station. The damage to the power station resulted in the release of a range of radionuclides, including caesium-134, caesium-137 and iodine-131 into the atmosphere. Ten years on, decontamination efforts appear to have been effective, but concerns remain about disposal of contaminated soil and water, as well as the need for long-term future monitoring.

Decontamination of soil in a 9000km2 region surrounding the power plant began in 2013. The Japanese authorities focused mainly on radioactive caesium, particularly caesium-137 because of its relatively long half-life of 30 years. In cultivated areas, they removed the surface layer of soil down to 5cm and replaced it with crushed granite. In areas further from the power plant, they applied substances known to fix or substitute caesium such as potassium fertilisers and zeolite powders.

‘The initial remediation stage has been completed in the priority areas,’ reports Olivier Evrard of the Laboratory of Climate and Environmental Sciences, Université Paris-Saclay, and coordinator of a review of land contamination studies around Fukushima.1 ‘The Japanese authorities decided in August 2020 that the remaining contaminated area will progressively be reopened without remediation.’

‘Radiocaesium is known to be rapidly and strongly bound to clays [so it] was concentrated in the upper 5cm layer of the soil after fallout,’ Evrard explains. ‘Removing this layer therefore led to very significant – around 80% – reduction in the contamination levels found in soils under cropland.’ There has also been a 90% reduction in caesium levels in flood deposits from rivers in 2020 compared with 2011 as cropland was the main source of contaminated material, Evrard says.

Topsoil removal was effective but expensive, costing the Japanese state about £21 billion. It also generated a significant amount of waste, about 20 million m3. ‘Most of it is being stored in interim facilities in the vicinity of the plant until 2045,’ reports Evrard. ‘The scraped soils with radiocaesium concentrations lower than 8000Bq/kg will be allowed to be used for construction works.’ The remainder will be shipped to final disposal sites.

Evrard says this is the first time that such a major clean-up effort has been made following a nuclear accident. ‘[It] gives us valuable insights into the effectiveness of decontamination techniques, particularly for removing caesium from the environment.’ His team plans to use the measurements conducted in Fukushima to calibrate and validate computer models of sediment and contaminant transfers in landscapes and river systems. These may be used as decision-making tools to compare the impacts of potential remediation scenarios for future accidents.

Research continues on several fronts, including contamination transfer from forests to rivers and coastal areas. Forests were not cleaned up, even though they cover 75% of the fallout zone. ‘Radiocaesium transfer in forests is complex,’ Evrard explains. ‘Nowadays, it is estimated that most radiocaesium has transferred from the canopy and the litter layers to mineral soil layers under forests, with a limited part being transferred via the roots back to the trees.’ The concern is that these forests could be a long-term reservoir of caesium, which soil erosion, landslides and floods could redistribute around the area.

Other research priorities include problems recultivating decontaminated agricultural land, particularly soil fertility and the safety of locally grown food. As residents return to the area, it’s vital to keep monitoring radioactivity in plants. ‘Transfer coefficients from soils to plants vary among species,’ Evrard notes. ‘Mushrooms, for example, are known to particularly concentrate radiocaesium.’

Before the accident, the village of Kawauchi was famous for its edible wild mushrooms. Now, almost 80% of the residents have returned to the village, which is 30km from the power plant. But a recent study warned that 76% of wild mushrooms collected locally between 2016 and 2019 exceeded Japanese regulatory limits for radiocaesium.2 However, the team notes that the effective dose from eating mushrooms for a year was lower than the regulatory safety limits.

Satoshi Utsunomiya of Kyushu University and Gareth Law of the University of Helsinki have found that these larger particles are more radioactive than previously thought. Surface soil taken less than 4km from Reactor Unit 1 in 2017 and 2018 contained high levels of caesium and numerous radioactive particles.3 Two particles from these samples gave the highest ever caesium activities for particles emitted from the accident.

The particle with the highest activity had a glassy carbon core and a surface embedded with other microparticles, including a lead-tin alloy, fibrous aluminium-silicate and quartz. This probably reflects the composition of airborne particles within the reactor building at the moment of the hydrogen explosion. The second particle was an aggregate of flaky silicate nanoparticles. The team believes it formed when damaged building materials adsorbed caesium released from the reactor fuel in the explosion.

Particle size ranged from 300µm to 3mm. ‘Luckily, these particles are too large to be inhaled by humans,’ says Utsunomiya. ‘Overall, despite the very high level of activity, we expect that the particles would have negligible health impacts for people as they would not easily adhere to the skin [either].’ But filter feeders like clams could consume these particles. ‘It’s possible that we could see acute health effects in such animals,’ says Utsunomiya. ‘However, first we should understand how prevalent the new particle type is before we consider potential impacts. Further, we must emphasise, to date we know of no Fukushima study that has documented acute radiation effects in animals.’

Utsunomiya and Law suggest that these highly radioactive particles are just the tip of the iceberg – it’s likely that particles of different compositions will also be found. ‘We have not learned enough about the accident yet,’ Law comments. ‘The importance of survey work and independent scientific discovery is still increasing after 10 years. It was similar for Chernobyl. Our studies, and that of others, let us gauge the environmental impacts of nuclear accidents. In turn, the data we produce can inform clean-up efforts. But, our studies also help us piece together what happened inside the reactors as the accidents happened. That information is also important – it can inform decommissioning and clean-up efforts at the reactor site.’

Overall, they say it will be impossible to completely clean up the environment near the plant. Surveys, cleaning and active management will be needed well into the future.

The Fukushima accident resulted in the largest single discharge of human-made radioactive material into the marine environment. However, radiocaesium levels are now hundreds of thousands of times lower than at their peak in April 2011, and fish and other seafood are well within Japan’s strict limits for radioactive contamination.

‘We’ve watched over the past nine-plus years as the levels of radioactive caesium have declined in seawater and in marine life in the Pacific,’ says Ken Buesseler, a marine chemist at the Woods Hole Oceanographic Institution. The good news is that, since 2015, radiocaesium levels in the ocean have dropped, even near to the site of the power plant. ‘Out of the tens of thousands of fish analysed for caesium, only two were at or above the Japanese threshold of 100Bq/kg for seafood,’ he says. Levels are also well below any standards for exposure when swimming or surfing.

Buesseler is now more concerned about the huge challenges that remain in decommissioning the reactors and clean-up on land.4 There are more than 1000 tanks at the site that contain contaminated water and there are proposals to release more than 1 million tonnes of this water into the ocean. ‘There are quite a few radioactive contaminants still in those tanks that we need to think about, some of which were not seen in large amounts in 2011, but most importantly, they don’t all act the same in the ocean.’

The treated water contains radionuclides such as tritium, carbon-14, cobalt-60 and strontium-90. ‘The current focus is on tritium,’ says Buesseler. ‘[But] the non-tritium isotopes are more harmful to human health and are accumulated to a greater degree in seafloor sediments and fish. Hence any release plan needs to more fully consider their fate, which is quite different than tritium.’

Any option that involves ocean releases would need independent groups keeping track of all potential contaminants in seawater, the seafloor and marine life, Buesseler says. He believes that widespread monitoring will need to continue, not just near the reactor site, but along the coastlines.

Buesseler also worries about who will fund future independent studies of radioactive material in the oceans. Without continued funding it will get more difficult to attract new blood to study these issues . ‘It is hard to keep up with training the next generation of scientists who can make these measurements. With more than 400 nuclear power plants worldwide, and most on the coast or a river draining to the ocean, we certainly need to be able to know the fate of radioactivity and consequences for the ocean, not just after accidents but during normal operations.’