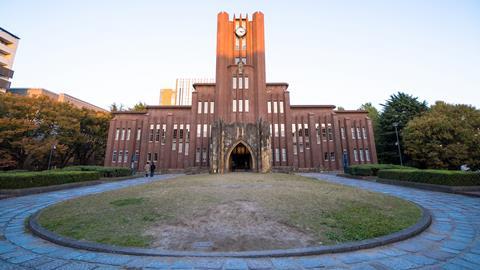 Japan’s new ¥10 trillion (£65 billion) national endowment fund to boost research in universities will go live at the start of the new financial year, Japan’s Science and Technology Agency (JST) has confirmed. But universities will have to meet strict criteria to apply for funding as the government tries to push the sector towards long awaited reform.

First announced last January, details remain under wraps but it is expected that ¥4.5 trillion (£39 billion) of seed money will come from government, backed up with other investments from universities and the financial sector. This money will be invested in the stock and bond markets to eventually reach the target ¥10 trillion. JST, which will manage the fund, is aiming for a 3% annual return once the fund gets going.

Universities should be able to apply to the fund from April for selection in 2023 with funding to follow a year later. However, in practice, it looks like only a small number of top-flight universities will be eligible. They will have to meet a series of conditions aimed at reforming the university sector’s approach to research and financing.

One condition is to set up their own individual endowment funds to generate a certain level of return. While some universities already have funds, these remain relatively small compared with some of their US counterparts – Kyoto University’s independently managed endowment fund is worth around ¥250.2 billion (£1.5 billion). The government wants universities to follow the US model where universities such as Harvard run a $53 billion (£39 billion) fund.

The government also wants universities to restructure their governance systems to be more like the US. This involves establishing a board of trustees responsible for supervising the running of the university and its endowment fund.

Additionally, the Council for Science Technology and Innovation has outlined various ‘goals’ for universities wanting to bid for money. These include focusing research on strategic priorities such as artificial intelligence, biotechnology and quantum technology, and on more risky emerging fields. Other goals include attracting top researchers from around the world, building multi-disciplinary PhD programmes and improving research conditions, for example by recruiting more support staff.

The creation of the fund follows years of budget cuts. Since 2004, when Japan’s 86 national universities were semi-privatised, they have received a block payment for research and could compete for some other small sources of funding. They were also encouraged to look for funding from the private sector. This was to make up the shortfall as the government cut their budgets by 1% a year from 2004. ‘Generally this has not happened and they have just learnt to live with budget cuts,’ says David Hajime Kornhauser, director of global communications at Kyoto University.

It’s widely accepted that this policy has contributed to a decline in the international competitiveness of Japanese research in science and innovation. Japan dropped to tenth place in terms of the number of influential science papers published between 2017 and 2019, according to the education ministry. Papers in the analysis performed last August were deemed to be influential if they were among the top 10% in terms of how many citations they received. In addition, there were only two Japanese institutions in the world’s top 200 universities last year compared to five in 2011, according to the Times Higher Education World University rankings.

‘The competitiveness of national Japanese universities has been declining for many years and many young people are choosing not to continue their studies to PhD level or develop research careers in academia,’ explains Yuko Harayama, an executive director at Riken, Japan’s largest research organisation. ‘The government wants to reverse this situation but also increase productivity in science, reposition science in our society, create a research ecosystem, and empower Japanese investors. What has been missing up till now is the money.’

For national universities with funding issues, the new source of cash is attractive, but it won’t be plain sailing, says Harayama. ‘For a start, the levels of bureaucracy will be daunting. While JST will manage the fund, there will be many layers of supervision, ending at Cabinet Office level. It will be very competitive.’

As well as all the red tape, the commitment to reform will be challenging, she says. ‘For universities, creating their own endowment fund presents several problems, such as attracting the money to start it up, and finding and paying for the right professionals to run it. [Such people] will need to appreciate that universities are different creatures to private companies with other priorities apart from making money. Overall, universities will have to spend money to get money.’

Restructuring governance systems will also be difficult. Harayama, who sits on the University of Tokyo’s administrative council, says if universities are agile they could organise reform to their advantage. ‘But they will have to face many layers of micromanagement, supervision and monitoring so there will be many more burdens. It will be a balancing act of cost, time and eventual financial gain.’

Harayama cautions that it could take several years to see how the fund works out. Unusually, the Japanese government has taken a long-term view and given the fund five years to get going.

Meanwhile, universities are still waiting for details which are only now filtering through the education ministry, Kornhauser says. ‘Going on past experience, key programmes aimed at change often get side-lined, but this idea seems more serious, coming as it does from the Cabinet Office directly. Universities are used to surfing different sources but it will take time for them to react as the fund requires serious commitments to reform.’

Like Harayama, Kornhauser warns that, if a university is going to set up its own endowment fund, then it will need a fund manager with financial expertise. ‘Bringing in someone like this to a national university is almost unheard of, and when it has happened, the role often gets stymied as the cultures are so different. Any push for reform is often countered by intense internal pressure not to change. That’s why any reform, if it happens, will take time. Each institution will have to work it out in their own way, and decide how to implement this new funding mechanism.’