A new gold standard for nano 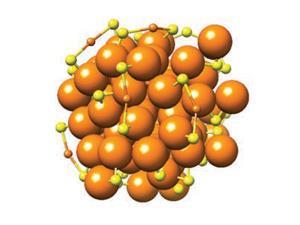 Characterising gold nanoparticles at atomic resolution might improve our understanding of the catalytic activity of these materials, according to an international team. These researchers have now demonstrated that it is possible to use electron microscopy to obtain data on at least one gold cluster of greater than 1nm diameter and to validate the results by comparison with small-angle x-ray scattering data, infrared absorption spectra and density functional theory calculations.

Gold nanoparticles are of fundamental scientific interest, bridging the gap between the atomic, the tiniest clusters of atoms and the bulk metal. They exist in the realm of 1 to 100nm and also have potential in quantum dot technology, biomedical research as labels and many other areas. Unfortunately, until now only one nanoscopic gold cluster, an entity containing 102 gold atoms, has succumbed to atomic resolution structural investigation by x-ray crystallography. Other gold nanoparticles have proved less amenable to the technique.

Now, Roger Kornberg at Stanford University School of Medicine in the US, and colleagues have used a minimal electron dose in aberration-corrected transmission electron microscopy to obtain an atomic resolution structure for a nanoparticle containing 68 gold atoms. The team suggests that the approach should be generally applicable, potentially opening up characterisation of a wide range of shapes and sizes of gold nanoparticles. This is especially useful as no prior knowledge about the structure is needed, the team says.

The earlier work with the 102 atom nanoparticles demonstrated that such an entity is actually a molecule with a precise composition and distinct arrangement of atoms. Perhaps paradoxically, it also revealed this entity to be a super atom stabilised by filled electron shells. The new work by Kornberg and colleagues lends support to this notion of a super atom with a molecular character to other gold clusters, but also points to two notable differences. The first being that the electronic structure of this 68 atom nanoparticles does not indicate that the electron shells are filled, suggesting that it is not a super atom. Secondly, whereas the 102 atom nanoparticle has global symmetry pivoting on a truncated decahedral core, the 68 atom particle has much lower symmetry.

‘The work by Kornberg et al is indeed impressive,’ says Mikael Johansson of the Technical University of Munich, Germany. ‘This size region is perhaps the most difficult to characterise, both experimentally and theoretically. That a definitive, low symmetry structure exists, and has successfully been determined comes with a promise of greater understanding, and thus practical exploitability of gold clusters of this size in the future.’