An odd electron makes the magnetism 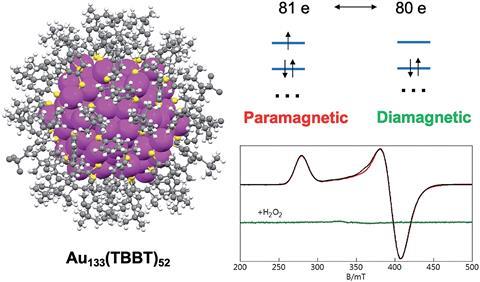 Researchers have identified paramagnetic behaviour in a gold nanocluster – the largest paramagnet of its kind yet known.1

Gold nanoclusters – intricate arrangements of gold atoms often combined with organic ligands – sit on the boundary between molecules and bulk metals. In particular, valence electrons stay somewhat bound to their atoms, instead of running free as they do in a metal.

Such nanoclusters show a host of intriguing optical and electronic properties, but knowledge of their magnetic behaviour has often lagged behind. Nanoscientist Rongchao Jin and magnetism expert Michael Hendrich have built a longstanding partnership trying to unravel these overlooked magnetic mysteries.

‘More than 10 years ago, Professor Jin asked me, “Can you prove whether this particle is paramagnetic?” And I thought, probably this has been done a long time ago. But to my astonishment, it had not been done,’ says Hendrich.

The particle in question contained 25 gold atoms, and the scientists successfully showed that yes, it was paramagnetic.2 A decade on, the pair, leading a team at Carnegie Mellon University in the US, have found paramagnetism in the much bigger Au133(TBBT)52, a cluster of gold atoms and 4-tert-butylbenzenethiolate ligands.

Most large gold nanoclusters possess an even number of valence electrons – 80, 84, 166… – so cannot be paramagnetic. This is because the electrons pair up, so that their magnetic spins cancel out. But Au133(TBBT)52 stands out in having 81 valence electrons, an odd number, leaving one electron unable to find a partner. It is this odd-electron-out that provides the paramagnetism.

It appears that this cluster is not just odd by number, but odd by nature too. ‘Odd numbers have fewer symmetries that would condense into a stable molecule, so are less likely than even numbers,’ Hendrich explains.

‘Surprisingly, it is very stable,’ says Jin, who adds that the cluster might find uses in magnetic resonance imaging, spintronics and even quantum computing. Concrete applications are some way off, however, but the discovery is generating interest in its own right.

‘This is a very careful study, a very detailed study,’ says Trevor Hayton, who studies copper nanoclusters at the University of California, Santa Barbara, USA. ‘They provide a lot of information, in more detail than anyone has been able to provide on these types of paramagnetic clusters. That’s very nice to see.’

Patricia Rivas Rojas, a researcher working on magnetic nanoparticles at the National University of General San Martín, Argentina, also notes the delicate and precise nature of the work. ‘A slight change in the number of atoms causes a great change in properties,’ she says. ‘It’s very exciting to work in a field that lies between atoms and materials as we know it.’