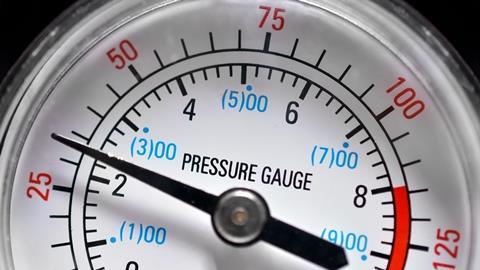 Scientists have turned a temperature experiment used to redefine the Kelvin on its head to make one of the world’s most accurate pressure gauges. The experiment is an entirely new way to measure pressure solely from helium’s electrical and quantum mechanical properties. Eventually, it could replace current standards that rely on mechanical pistons or tubes filled with mercury.

One of the oldest ways to realise the SI unit of pressure, the pascal, is the mercury manometer, invented in the 17th century. But given how toxic mercury can be, manometers are slowly disappearing. Just last year, the US National Institute of Standards and Technology (Nist) dismantled its 3m-tall column that once contained more than 200kg of mercury and served as the country’s pressure standard for 30 years.

Many metrology labs now use piston gauges, mechanical devices that work in a similar way to a balance. At the Physikalisch-Technische Bundesanstalt (PTB), Germany’s national metrology institute, scientists pushed measurements with piston gauges down to 1ppm uncertainty. Patrick Egan from Nist, who wasn’t involved in the work, explains that this requires determining the piston’s diameter accurately to within a few nanometres – something very few labs can do. Overall, Egan says, ‘the current state of affairs in pressure metrology is fairly unsatisfactory’. 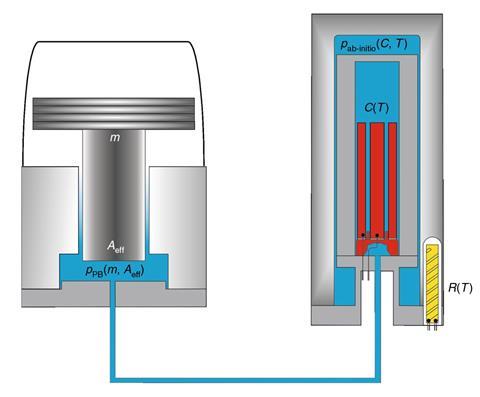 On the left, the classical, mechanical way of measuring pressure using a piston–cylinder system. On the right, the new electronic approach to pressure measurement that relies on helium’s electrical capacitance and quantum mechanical properties

Now a team at PTB led by Christof Gaiser has devised a way to realise the pascal that relies on helium’s electrical capacitance and its quantum mechanical properties. This method was proposed more than 20 years ago, but only in recent years have quantum chemical calculations become accurate enough to make it possible. The researchers achieved an uncertainty of below 5ppm at pressures of up to 7MPa – something that isn’t possible with piston gauges, which are only accurate at up to 0.1MPa.

‘You can measure the pressure by putting a weight on a piston with a known cross sectional area – that makes sense to everybody,’ says Michael de Podesta who focuses on temperature metrology at the UK’s National Physical Laboratory. ‘But the idea that you can measure pressure by measuring the electrical capacitance – a completely different property – and get the same answer; that’s gobsmacking.’

During efforts to redefine the SI units, Gaiser’s team had used the same setup to measure the Boltzmann constant. But now that the constant’s value is fixed, the researchers turned the experiment around and used it to measure pressure instead.

The scientists filled a capacitor with helium and measured changes in its ability to store electric charge. The capacitance change is related to helium’s dielectric constant and density, which in turn relate to pressure through the ideal gas law modified with calculated values for the atoms’ polarisability and particle interactions.

For comparison, the entire system was connected to one of PTB’s piston gauges. ‘The agreement is almost perfect,’ says Gaiser. The largest sources of uncertainty are the quantum mechanical values. ‘If the theory improves, we would maybe be able to go down to 3ppm uncertainty,’ Gaiser says.

Egan says that there are now several contenders for a new standard, including refractive index methods and superconducting microwave cavities. But the capacitance experiment seems to be best suited for high pressures. Just as for the kilogram, the days of the pascal relying on the properties of a physical object might soon be over.