A walk on the Pride side

On July 7, the streets of London filled with glitter and rainbows for the Pride in London parade. Chemistry World joined scientists marching for Pride in Stem

‘We founded Pride in Stem to raise the visibility of LGBTQ people and it’s been a successful two years, but we want to do more’ explains Alfredo Carpineti – chair and founder of the organisation. It was an unusually bright and sunny day in London, and his blue, glittered beard sparkled in the light. ‘There are many challenges for LGBTQ people in stem.’

‘Stem is a global challenge,’ according to Ben Britton, senior lecturer in materials science and engineering at Imperial College London. ‘It’s hard enough doing science, technology, engineering and mathematics, without having to be careful about who you talk to about your partner in the workplace.’

And although a growing number of people do feel comfortable being out in the workplace, Carpineti says around 40% still hide their orientation and that being open about their sexuality may be a barrier to future career development. ‘One in three US physicists have been told by a supervisor or a senior person to stay in the closet if they want to progress in science. If they are trans or gender non-conforming, half of them have experienced harassment in their department, and LGB students are still 10% less likely to continue a career in Stem after having studied the subject as an undergrad.’ 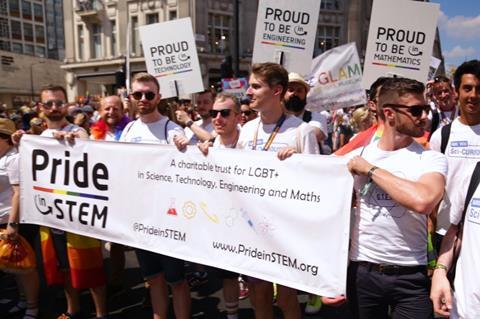 Even when a scientist does feel comfortable sharing their sexuality, the systems and institutions they work in may still not offer equality. ‘One of the big things, is whether or not people who are in same sex relationships are going to get the same employment benefits for their spouses,’ says Ashley Spindler, an astronomer and engineer. ‘Whether they’re going to get access to paternity and maternity leave if they’re using surrogacy, if they’re using adoption.’

To tackle this, Pride in Stem want to see greater visibility of LGBTQ+ people working in science. ‘It’s really important to be able to see people like you succeeding in science, because if you don’t, you feel like it’s not a place for you,’ adds Britton. Nessa Carson, a chemist working in the drug discovery industry, explains how this can make a big difference: ‘One thing I noticed when I was I was studying postgraduate chemistry was that there were a lot of queer women around my department. I really appreciated seeing their visibility. When it’s tough to be out yourself, it’s great to see these role models.’

Pride in Stem has ambitious goals: to increase the visibility of LGBTQ+ researchers in industry and academia, and to change attitudes in institutions, organisations and companies. ‘A change in attitudes needs to come from senior people – needs to come from management,’ explains Carpineti. ‘We’re trying to approach that by talking to politicians and the most senior managers in organisations.’

Carpineti says international collaboration has been important in the quest for visibility: ‘Just this year, a few days ago, we founded LGBT Stem day, the first international day of recognition for LGBTQ+ people in science, technology, engineering and maths. We hope that by showing that science is made by people – by people that can be any ethnicity, any gender, any sexual orientation – we can challenge stereotypes and we can make life easier for this generation and the next generation of scientists, technicians, engineers and mathematicians.’