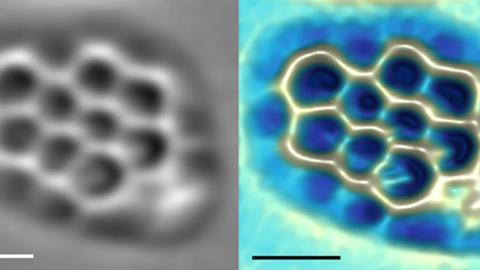 Researchers have taken a major step towards identifying the individual molecular components of asphaltene – a highly complex, dense mixture of hydrocarbons contained in crude oil. These compounds have a large influence on many properties of crude oil and can affect production, transport and refining. The oil industry would like to know more about the precise composition of asphaltenes to gain a more fundamental understanding of petroleum science and, for example, to allow more accurate modelling of oil reservoirs.

Asphaltenes contain several thousand individual species of hydrocarbon, many of them polycyclic. They are difficult to separate and characterise because they tend to stick together in solution, and traditional characterisation methods are based on ensemble measurements, where signals emanating from different components cannot easily be disentangled.

Now, researchers from Switzerland, Spain and the US have used atomic force microscopy (AFM) combined with scanning tunnelling microscopy (STM) to obtain atomic-scale resolution of asphaltenes. This has allowed the team to characterise the architecture of more than 150 individual molecules from asphaltenes.

‘Current knowledge about this material is quite limited and even some of the basic properties of the molecules in asphaltenes, such as their size, weight and architecture, have been under debate for years,’ says team member Bruno Schuler of IBM Research in Zurich.

The researchers heated solid samples of asphaltene held in ultrahigh vacuum at low temperature, which caused individual molecules to detach from the sample and alight on a substrate. These molecules were then probed by AFM to reveal their atomic structure, and by STM to provide information on the shape of the molecular orbitals.

The approach has yielded unprecedented information about the molecular components of asphaltenes. In particular there had been debate about whether the polycyclic aromatic hydrocarbons (PAHs) exist primarily as ‘islands’, in which the aromatic rings are directly fused together, or as ‘archipelagos’, where the rings are connected by alkyl chains. The study showed that asphaltene molecules consist of a central aromatic core with alkyl side chains; in some cases the PAHs are connected by single bonds – as in the archipelago arrangement – but the dominant architecture consists of a single aromatic core with peripheral alkyl chains – the island model.

One of Schuler’s co-workers Leo Gross, also of IBM Research, says: ‘This type of fundamental study could help to improve upstream and downstream oil production and enhanced oil recovery from first principles from a basic understanding of molecular models.’

Commenting on the new work, Douglas Kushnerick, of ExxonMobil Research and Engineering in the US, says: ‘This work shows a direct observation of the chemical structures in a complex mixture of organic molecules, with an amazing clarity that we have not seen before. There are many relevant industrial chemistry problems that might be addressed if we could ultimately identify structures efficiently.’