Following on from their previous work on identifying the structures of asphaltenes, researchers from Switzerland, the US and Spain have proven that they can identify tetrahedrally co-ordinated carbon backbones in model asphaltene molecules, and distinguish them from their planar aromatic counterparts.

Asphaltenes are a dense mixture of hydrocarbons found in crude oil, that are commonly used for road paving and waterproofing. Thousands of different molecular species make up this fraction, based around a system of polyaromatic carbon ring units, with aliphatic side chains of various lengths. 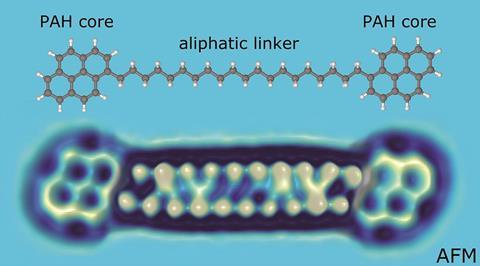 These molecules have very poor solubility and tend to clump together in solution. The tendency to stick together means that they are also difficult to vaporise or ionise, making them tricky to identify by traditional techniques. Asphaltenes influence the physical properties of crude oil, and identifying the molecules involved will help the oil industry to improve oil extraction, processing and transportation.

In their previous study, the group found a low abundance of archipelago-type molecules with two polycyclic aromatic hydrocarbon (PAH) cores joined by a saturated carbon chain, which was a surprise. The most common molecules appeared to have a single aromatic core with multiple peripheral alkyl chains, known as island-type molecules. This raised questions about the reliability of atomic force microscopy (AFM) for identifying asphaltenes.

To resolve these issues, the researchers worked with a selection of model asphaltene archipelago-type compounds. These were evaporated from solid samples and deposited onto a substrate, before being probed by AFM. They found that they could distinguish between different lengths of alkyl chains due to their typical zig-zag pattern. They were able to use a carbon monoxide modified AFM tip to oxidise the alkyl chain to an alkenyl chain, proving that the molecule was deposited intact onto the surface.

The flexibility and non-planarity of the linking chains posed a big challenge. ‘In some cases, many different adsorption geometries had to be measured to fully characterise the molecule,’ says Bruno Schuler who led the work when he was at IBM Research in Zurich. Electron injection from the AFM tip and thermal annealing of the sample after depositing the molecules meant they could force the chain into the untwisted conformation.

‘The non-planarity issue could be accounted for by measuring at different scan heights and by cleaving hydrogens from the sp3 hybridised carbons by voltage pulses from the tip,’ Schuler explains. This aromatisation of the molecule did not only help to identify the molecule geometry but also provided evidence that the aliphatic moieties could be prepared intact on the sample surface.

Commenting on the work, Ruslan Temirov, leader of the low-temperature scanning tunneling microscopy and AFM group at the Jülich Research Centre, Germany is amazed at how imaging with functionalised tips has changed the field of atomic force microscopy. ‘I feel that this transformation is very important as it brings high-resolution scanning probe microscopy closer to real life applications. This work makes a further step precisely in that direction, demonstrating that the structure of relatively large, soft and non-planar molecules can also be imaged with an astonishing amount of detail.’