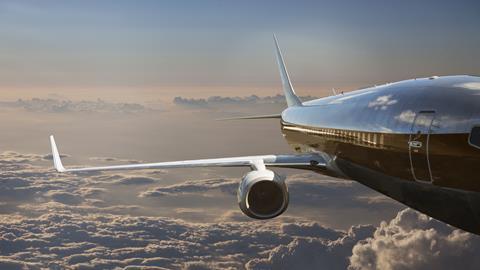 Aircraft wings could be assembled cheaply and easily using nanotubes

Carbon nanotubes have been used to simply and inexpensively join together aerospace-grade composites used to manufacture aircraft. The technique, developed by researchers at the Massachusetts Institute of Technology (MIT), bypasses the need for costly and energy intensive pressure vessels and could speed up the production of aircraft and high-performance composite structures like wind turbine blades.

Modern aircraft are constructed from sheet-like composites, which are fused together at high temperatures within giant pressurised vessels called autoclaves. These are required to force out tiny pockets of air that form between the sheets thanks to their microscopic surface roughness – much like squeezing out air bubbles that form under a plastic film.

‘If you’re making a primary structure like a fuselage or wing, you need to build a pressure vessel, or autoclave, the size of a two- or three-storey building, which itself requires time and money to pressurise,’ MIT aeronautics researcher Brian Wardle explains.

Wardle and colleagues have turned to nanoporous networks – ultrathin films made of internally-aligned materials like carbon nanotubes – to join composites together. The spaces between each nanotube in such dense films can act as capillaries – and generate pressure based on their geometry and surface energy. The team predicted that by sandwiching such a film between two sheets of other materials and heating it, a 50% greater capillary pressure could be applied to the surrounding materials than is possible in an autoclave – while similarly eliminating any trapped voids. 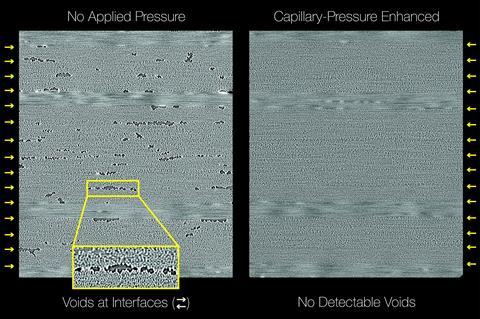 Source: Courtesy of the researchers

MIT researchers have devised a way to manufacture aerospace-grade advanced carbon fibre composites without applied pressure from an autoclave. Cross-sections of the composites show that heating a carbon nanotube film between the two parts to be fused can provide the needed pressure at the interfaces to elinate voids that weaken the joints

Putting the idea to the test, the team sandwiched a film of vertically-aligned carbon nanotubes between two sheets of aircraft composite material and heated them using an electrified wrap of nanotube film. The resulting material was void-free, just like an autoclaved composite. ‘We found that our out-of-autoclave composite was just as strong as the gold-standard autoclave process composite used for primary aerospace structures,’ Wardle says.

The approach complements a technique developed by the team in 2015 that used a wrapping of carbon nanotubes to heat and fuse together composites without a giant oven and for a hundredth the energy cost.

‘Autoclaved components are regarded as the standard that any alternative process should exceed to have any chance of wide scale adoption in industry, particularly for the manufacture of critical parts,’ says advanced manufacturing expert Keith Ridgway of the University of Strathclyde, who was not involved in the study. Calling out-of-autoclave curing the ‘holy grail’ of composites manufacturing, he notes that other proposed alternatives – such as microwave-based approaches – can appear attractive but do not provide the requisite integrity, often leaving as much as 1% of the material containing voids that weaken it.

‘At the current time – with the added focus on climate change and reducing energy use – the innovation proposed is both exciting and timely,’ Ridgway adds.

The team is now investigating how production films can be scaled up from their centimetre-size test samples to structures as large as aircraft wings.

‘Now we have this new material solution that can provide on-demand pressure where you need it,’ Wardle says. ‘Beyond airplanes, most of the composite production in the world is pipes – for water, gas, oil, all the things that go in and out of our lives. This could make all those things, without the oven and autoclave infrastructure.’