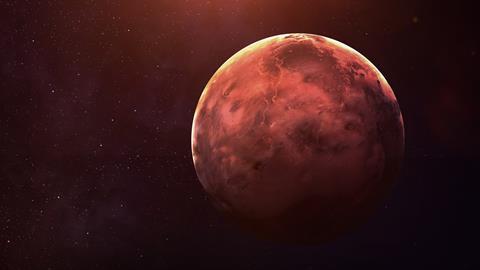 The BepiColombo mission has blasted off on a seven-year odyssey to the planet Mercury, where a pair of orbiting satellites will explore the chemistry of its surface and magnetosphere. The mission offers a chance to glimpse how the early solar system evolved and may even shed light on the origins of life on Earth.

Mercury is so close to the sun, and under such immense gravitational pull, it experiences just three days for every two trips around the sun. Temperatures at the equator can reach a blistering 450°C. At the other extreme, Mercury has ice tens of metres deep in craters which are in permanent shadow in its polar regions. ‘These are places that the sun has not shone in for billions of years,’ says planetary scientist David Paige at University of California, Los Angeles (UCLA). 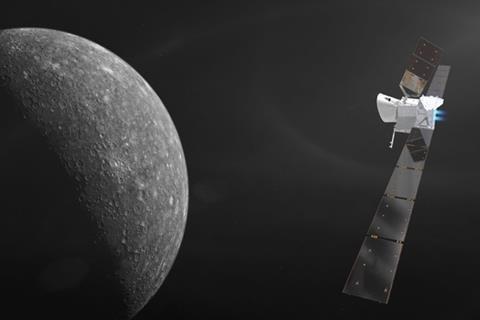 BepiColombo will reach Mercury in 2025, then split into two satellites that will orbit the planet taking measurements

Earth-based radar identified possible ice fields on Mercury in the 1990s, and Paige used the laser altimeter on Nasa’s Messenger mission between 2011 and 2015 to discover and map ice below the planet’s surface, where temperatures in the craters get down to -180°C.

‘Our radar observations suggest that this ice is relatively pure, so it doesn’t contain a lot of rocky material, but it is coated, on the order of 10cm thick, by a layer of organic material,’ says Paige. This is assumed to have originated on comets or asteroids that struck the planet, delivering water, methane, carbon dioxide, ammonia and other chemicals. On Earth, these bodies usually burn up as they enter the atmosphere.

‘We think that Earth didn’t form with a lot of water or complex organic molecules, which were the building blocks of prebiotic chemistry,’ says Sean Solomon, planetary scientist at Columbia University, Ohio, and lead scientist on the Messenger mission. ‘Rather those were delivered to the rocky planets by impacts of comets and other objects from the outer Solar System where these materials were in deep cold storage.’

In search of organics

One of the BepiColombo satellites – the Mercury Planetary Orbiter – will carry a payload of 11 scientific instruments, including infrared, x-ray and mass spectrometers, to get a closer look at some of the organic compounds near the planet’s surface, as well as its overall structure and composition.

Evidence of early Earth impacts have been lost through the geological workings of our planet. Mercury is different, however, due to its limited atmosphere and cold craters. ‘This is a record of delivery to the inner solar system of water and organic materials from the outer solar system. We could look at their layering and see how many impact events were involved and timescales,’ Solomon explains. ‘This harks back to what we think the source of water and organic compounds on early Earth was.’

Messenger observations revealed icy craters covered ‘by a dark residue of material that we think is rich in organics’, says Paige. The origin of these organics, and the ice that exists in the polar region, is much debated. ‘We don’t know if they were formed by one recent big impact, or one 4 billion years ago. The new BepiColombo observations will hopefully give us a clue,’ he says. The mission, which is being jointly run by the Japanese Aerospace Exploration Agency and the European Space Agency, will give superior coverage in the northern and southern latitudes that Messenger never covered.

‘There is an interesting debate about whether the polar deposits came from many small impacts in the last tens of millions of years, or whether there was one big cometary impact that supplied all the water and organics in one event,’ says Solomon. ‘There was a candidate crater identified in the northern hemisphere. If that is true, the southern hemisphere would have acquired less from that event and the southern deposits will look different.’

Chemist and planetary scientist Mona Delitsky points to models suggesting a comet impacting Mercury at a low angle might not be vaporised on impact, meaning that we ‘could have a pristine comet unchanged from the beginning of our Solar system, which would be a great resource to sample from’. After BepiColombo, whose satellites will begin orbiting Mercury in 2025, many planetary scientists say the next mission to Mercury should be a lander, if possible, sent to the polar regions.