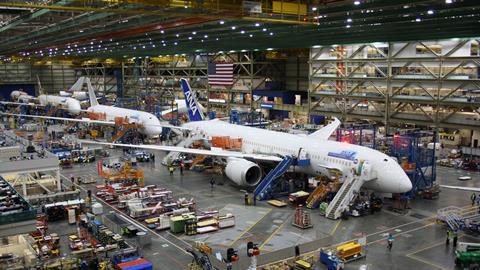 High-performance polymers used in top-of-the-line aircraft can be expensive and cost the earth thanks to their huge carbon footprint. But a US team has now found a way to make fibre-reinforced polymer composites similar to those found in aircraft using just a tiny fraction of the energy.

Frontal polymerisation was first discovered at the Institute of Chemical Physics in Russia in 1972, before being independently rediscovered in 1991 by John Pojman and colleagues at the University of Southern Mississippi in the US. Ideally, the monomer remains stable until heat activates polymerisation at a single point. This triggers an exothermic polymerisation front that spreads rapidly through the material just as knocking over the first domino can topple the rest in a run. By using the molecules’ energy of polymerisation to trigger further polymerisation, dramatic energy savings can be achieved.

Various monomers have been used in front polymerisation, but they have generally been high-energy molecules such as acrylates. Unfortunately, these tend to polymerise spontaneously. Moreover, the resulting polymers often lack high-performance properties. ‘Mostly we’re looking for a high glass-transition temperature, high elastic modulus, high strength and good chemical resistance,’ says Nancy Sottos, part of the University of Illinois at Urbana–Champaign team behind the new work. Sottos notes that the carbon fibre–epoxy fuselage and wings of a Boeing 787 require curing for eight hours in a giant autoclave. ‘You’re just running a very large oven!’ Sottos points out.

Sottos and colleagues have previously shown that, when combined with thermally-activated ruthenium catalysts, dicyclopentadiene can undergo frontal ring-opening polymerisation to produce a cross-linked, high-performance thermoset polymer. By adding alkyl phosphite inhibitors, the researchers extended the monomer’s lifetime to around 30 hours. This allowed them to infuse their monomer with carbon fibres before polymerisation. ‘You only have heat input for one or two seconds – we use a resistive wire – before the thermal wave progresses in a controlled way across the part,’ says Sottos. The researchers estimate that the material, which had similar properties to the 787 wing material, required nine orders of magnitude less energy to cure. They are now optimising the material and studying extending the method to other polymers.

Pojman, now at Louisiana State University, is impressed. ‘This use of ring-opening metathesis polymerisation is relatively recent,’ he says. He adds that one of the difficulties with its transition to industry has been the development of a two-stage polymerisation process. ‘It’s really a big deal to get a pot life of more than a day: that means you can prepare a material, infuse it into a resin and store it. I think people can envisage using these for large-scale composites, not just for aerospace but also for wind turbines.’