Printing replacement body parts may sound like something out of a sci-fi novel, but since 3D printing was introduced in the 1980s, scientists have been aspiring to make this a reality. Now, a team from Texas in the US has developed a super tough biomaterial that could be used to print load-bearing body parts such as knee cartilage. 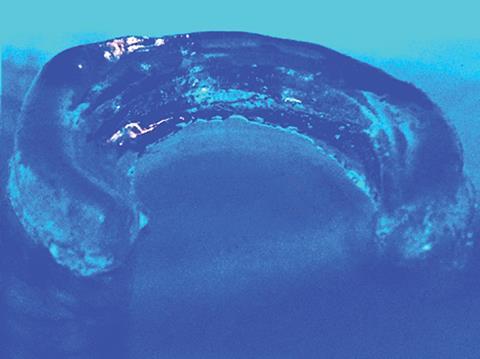 A severe shortage of donors and biocompatibility issues are just two of the hurdles hindering successful transplants. Printing replacement tissues that function as well as, or better than the original tissue could be a way to side-step these obstacles.

Some simple tissues and cell scaffolds have already been developed, but more complex tissues prove harder to get right. ‘A major challenge for tissue engineering is producing constructs of the clinically relevant size, shape and structural integrity. 3D bioprinting has the potential to meet this goal,’ explains Anthony Atala, a practicing surgeon and director of the Wake Forest Institute for Regenerative Medicine in North Carolina, US, who was not involved in the study.

Hydrogels are a network of hydrophilic polymer chains and a frontrunner in the race to find suitable biomaterials. They are already being used as a biocompatible material for some tissue scaffolds. Their high water content gives them a degree of flexibility that mimics natural tissues. However, this also means that on their own, hydrogels are not particularly strong and do not easily hold their shape.

In a collaborative effort, Jenny Qiu and fellow scientists from the Texas Tech University and Texas A&M University have uncovered a way to strengthen hydrogels; by incorporating a very viscous polymer called alginate. Their improved properties are thanks to the way the alginate interacts with the hydrogel network.

Uncrosslinked alginate chains interweave with the hydrogel network and make it tougher. Furthermore, when calcium ions were introduced by submerging the structure in a calcium chloride solution, ionic bonds formed crosslinks within the alginate network. The resulting tensile strength of the hydrogel was higher than any other hydrogel, and was on par with natural cartilage. Adding alginate also allowed precise printing; structures held their shape better as the overall viscosity of the hydrogel network was increased.

‘This is a first-rate piece of research that illustrates the many variables and challenges that must be considered in order for 3D bioprinting to be clinically translatable,’ adds Atala.