Amine behind mask hides its reactivity 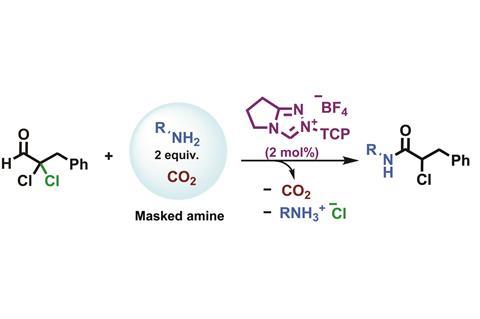 Chemists at Imperial College London, UK, have overcome limitations that afflict a specific class of amidation reactions, used to produce a range of compounds from drugs to valuable materials. Their simple trick was to add carbon dioxide, which masks the reagent’s reactivity, making sure it only reacts when they want it to.

Using N -heterocyclic carbenes (NHCs) to catalyse redox esterification between an aldehyde and an alcohol is easy. Amidation reactions on the other hand, where the alcohol is replaced by an amine, are less straightforward. While electron-poor amines react well, electron-rich amines have a tendency to form imines, which prevent the catalyst from doing its job.

Now, Matthew Fuchter and Robert Davidson have extended the scope of the direct redox amidation reaction by pre-treating the amine with carbon dioxide. This forms an ammonium carbamate salt, stopping the amine from participating in side reactions until it is freed by the catalyst.

However, the new reaction gives only low yields with bulky amines and aldehydes – a problem the team is now looking to address.