Ortho-diethynylbenzene dianion is the strongest base ever made

The methyl anion H3C– was the strongest known base for 30 years, until Tian and colleagues made the lithium monoxide anion in 2008, which has held the record since. Now, scientists in Australia have knocked LiO– down to second place, making a gas-phase dianion with the highest basicity ever found. 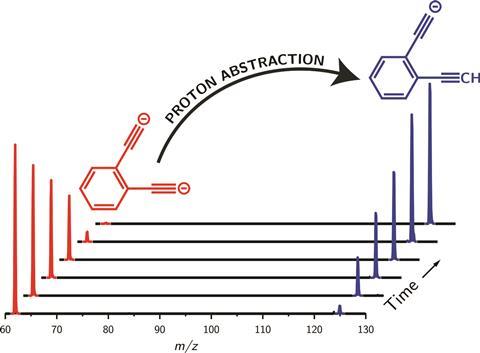 Superbases with high proton affinities like n-butyl lithium and sodium hydride are fundamental to organic synthesis. Chemists use them to deprotonate weak acids – the weaker the acid, the stronger the base needed to deprotonate it.

Berwyck Poad and his team at the University of Wollongong, Australia, have been searching for superbasic multiply-charged anions. However, this type of molecule is often too unstable to exist due to repulsion between its adjacent negative charges. Using a computational model that calculates electron transfer rates, Poad and his colleagues predicted that the highly conjugated ortho-diethynylbenzene dianion might be stable. ‘The exciting thing about this work is that you can predict the stability of a dianion using Marcus–Hush theory,’ says Poad. ‘The proton affinity for a dianion is a reasonably straightforward calculation that can be performed, but the main question is always going to be, can you make it experimentally?’ Indeed, Poad’s team managed to synthesise the superbasic anion, which can even deprotonate benzene, in an ion-trap mass spectrometer.

‘The broader impacts of this research include the possibility that new knowledge about anions, basicity and inert counterions will impact commercially important areas of chemistry such as petroleum reforming, polymerization catalysis, battery technology and fuel cell technology,’ remarks Robert Vianello, an expert in intermolecular interactions and the design of new organic materials. ‘Molecules that have never been made before could be allowed, therefore turning many of the challenges chemistry is facing into novel opportunities.’

This article is open acces