An ultralight graphene structure for all seasons 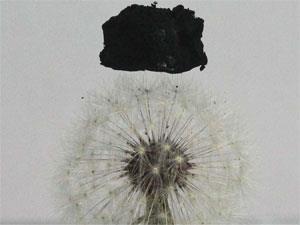 The graphene framework is not only light, it’s flame resistant and mops up oil

Chemists in China claim to have created the lightest graphene framework to date. The material, which is light enough to rest on a dandelion seed head, is also fire resistant and has record-breaking adsorption and capacitance.

The development of ultralight materials has exploded in recent years. Last year, engineers in the US presented a material made of hollow metallic tubes in a micro-lattice. With a density of 0.9mg/cm3, the material was 100 times lighter than styrofoam. Yet that record was beaten in July, when material scientists in Germany produced what they called aerographite: a network of carbon microtubes with a density of just 0.2mg/cm3.

Although the latest material, which has a density of 2.1mg/cm3, does not approach these records, it is the lightest graphene framework to date. Graphene, which took the 2010 Nobel prize for physics, is a two-dimensional layer of graphite just one atom thick arranged in a chickenwire pattern. Importantly, graphene has superlative electrical and mechanical properties, which scientists are eager to capitalise on.

Liangti Qu at the Beijing Institute of Technology, China, with colleagues from there and Tsinghua University, also in Beijing, have developed their graphene framework by regulating the graphene’s carbon–carbon bonds, using nitrogen as a dopant. To make their material they treat an aqueous suspension of graphene oxide with pyrrole – an aromatic, nitrogen-containing compound – in a steam oven. The pyrrole acts as a ‘swelling agent’, preventing the graphene oxide from self-stacking so that a large framework can be formed. The process leaves a gel, which the researchers freeze dry and then anneal at high temperatures.

Lighter than a feather

The resultant material has the dark appearance of graphite but, like the other ultralight materials unveiled in the past year, is light enough to rest on a dandelion seed head. Scanning electron microscope images reveal that the lightness stems from numerous pores, made rigid by a graphene skeleton.

From an applications point of view, however, the lightness is not the most important feature. The material is fire resistant and able to withstand repeated burning without suffering any structural damage. It can adsorb between 200 and 600 times its own weight of oil or other non-polar liquids – a record for carbon-based materials. Finally, the material can generate a capacitance of over 480F/g, approaching the theoretical limit for pure graphene.

‘We think this new material stands for an exciting advance because it has presented high performance in several areas superior to many other carbon materials, although the density may not be the lowest among them,’ says Qu.

Materials scientist Rainer Adelung at Kiel University in Germany thinks the material could be used as a supercapacitor, or for mopping up oil spills. He says its potential depends on the volume in which it can be made; at the moment the volume is small, but the fabrication process is ‘very simple’. ‘In principle it’s scalable,’ he adds.

But while the material’s lightness may be enough for some applications, for others it may indicate poor structural stability and mechanical properties, says Hui-Ming Cheng at the Shenyang National Laboratory for Materials Science in China. ‘It seems to be a very nice material which may have promising applications … if it has good structural stability,’ he says.