The trial of four people accused of running one of the biggest art forgery rings in post-war Germany has begun, with prosecutors expected to rely heavily on science-based testimony to make their case.

The four defendants - two men and two women based in Cologne - are accused of faking the works of 20th century artists such as Max Pechstein, Max Ernst, Kees van Dongen, Fernand L?ger and Heinrich Campendonk. They claimed the artworks were painted during the 1920s and had been stashed during the Second World War, and were part of a secret collection held by the wealthy German businessman, Werner J?ger, who died in 1992. 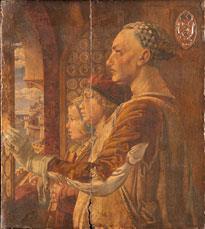 The two female defendants, who are granddaughters of J?ger, claimed they inherited the paintings and sold them to several dealers, auction houses and museums which believed they were authentic. One of the male defendants, an accomplished artist, is alleged to have painted the forgeries. The prosecution claims that they sold their first fake in 2001 and went on to sell a number of other paintings on the international market, including one painting to American actor Steve Martin. In total, the prosecution claims they made around €16 million.

Thus far around 14 of the quartet’s paintings have been declared forgeries, with another 33 still undergoing tests. The trial is expected to last until March.

Art under the microscope

Petra Breidenstein, an art expert in Berlin whose work includes using scientific techniques to advise on the authenticity of paintings and sculptures, says the forgeries should have been picked up straightaway.

Breidenstein, also an art historian who restores damaged paintings and sculptures, says she generally uses a combination of four methods to test for authenticity: macroscopical investigation, such as studying the painting style and technique to determine whether it matches the artist’s style; research to try to document the painting’s history; origin research to determine previous owners of the work; and scientific analysis.

’If this would have been done properly in the case of the J?ger’s collection, which never even existed, the paintings would have never been sold on the market,’ she says.

Ashok Roy, director of scientific research at the National Gallery in London, agrees with the assessment, and says: ’It’s not really that difficult to identify forgery fakes provided you do a proper analysis.’

Most of the standard non-invasive equipment used by art authentification experts can be found in a typical chemistry lab and include optical microscopes, x-ray equipment and infra-red imaging. Newer techniques being used to analyse artwork include hyperspectral imaging and x-ray fluorescence mapping. Invasive procedures require removing a ’microscopic fragment of paint’ to be chemically analysed, for example with electron microscopy or gas chromatography-mass spectrometry, Roy says.

Most art authenticity investigations focus on three aspects, Roy says. The first is pigments, which give paints their colour. These are made from minerals, natural and synthetic dyestuffs, or other man-made compounds and give each paint a chemical fingerprint. ’Each pigment of the pallete has a history and a lot is known about each and its manner of use,’ he says, and certain unique mixtures of pigments are associated with specific artists.

Breidenstein says some of the J?ger forgeries contain titanium white, a titanium dioxide-based pigment, which was not in use in the 1920s, when the J?ger paintings were claimed to have been painted.

The second is x-ray examination of the structure of paintings, which usually include multiple layers of paint applied in styles unique to the artist. The deepest layer is the canvas, on which most painters draw a first sketch before applying paint, he says, adding that most artists have a unique drawing style that can be identified - much like a person’s handwriting. These drawings can be detected using infrared imaging.

The third is the medium used to bind pigments, Roy says, adding that the ratio of pigment to medium affects the malleability, colour and drying time of the paint. Until around 1500, painters used egg tempera as a binder, especially the Italian masters. After that, various oils came into widespread use, such as linseed, walnut and poppy, he says.

Roy says that the science used by art experts must be underpinned by global cooperation and knowledge sharing among  museums, dealers, collectors, curators and other art experts. Science alone cannot ensure success against frauds, nor can classical non-scientific methods. ’I think we absolutely need both sets of skills,’ he says.