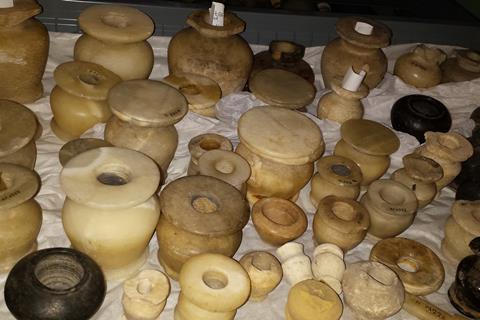 Ancient Egyptian cosmetic pots from the Louvre collection. Many of the pots still contain make-up and the researchers used carbon dating to establish when these cosmetics were formulated

Ancient chemists were synthesising paints and cosmetics at least 3500 years ago. This finding was made by researchers who developed a way to carbon date inorganic carbonate compounds, and used it to study preserved materials found in Egyptian and Greek tombs.

Lead carbonates were some of the most important ingredients in ancient paints and make-up. But while carbon dating is routinely used to determine the age of historic items made from plant or animal materials, analysing inorganic material is less straightforward.

Radioactive carbon-14 is continually produced in the atmosphere and is incorporated into plants, and therefore the food chain, during photosynthesis. When an organism dies, it stops taking in new carbon and so the ratio of carbon-14 to carbon’s other isotopes decreases as the carbon-14 gradually decays. This gives scientists a way to identify the age of plant and animal remains.

A team of researchers led by Lucile Beck of the University of Paris-Saclay, France, has now shown that during the manufacture of lead carbonates, atmospheric carbon dioxide – containing carbon-14 – is incorporated into the material. This allowed them to ascertain when samples of these compounds were made. It also enabled them to distinguish between synthetic lead carbonates and those with natural origins.

The team examined samples of ancient cosmetics held in the Louvre museum in Paris, including a blush powder discovered in a tomb in Eretria, Greece, and other pigments found in Egyptian burial chambers constructed during the reigns of Amenhotep III and Tutankhamun. Accelerator mass spectrometry was used to analyse the materials, the ages of which were compared to the known dates of other items found at the same sites, such as coins and inscriptions.

Where the ages of the lead carbonates matched the period of the tomb they were discovered in, the team concluded that they must have been artificially created. Whereas carbonates much older than their surrounds must have been naturally occurring minerals. The team showed that while the ancient Egyptians were using cerussite (PbCO3) extracted from local mines, they were able to produce their own phosgenite (Pb2Cl2CO3). A thousand years later, the ancient Greeks started manufacturing their own synthetic cerussite.

Beck’s team suggest that their technique could help authenticate ancient artworks, pointing out that lead white – a mixture of cerussite and hydrocerussite (Pb3(CO3)2(OH)2) – was the most important pigment used in the ancient art world.